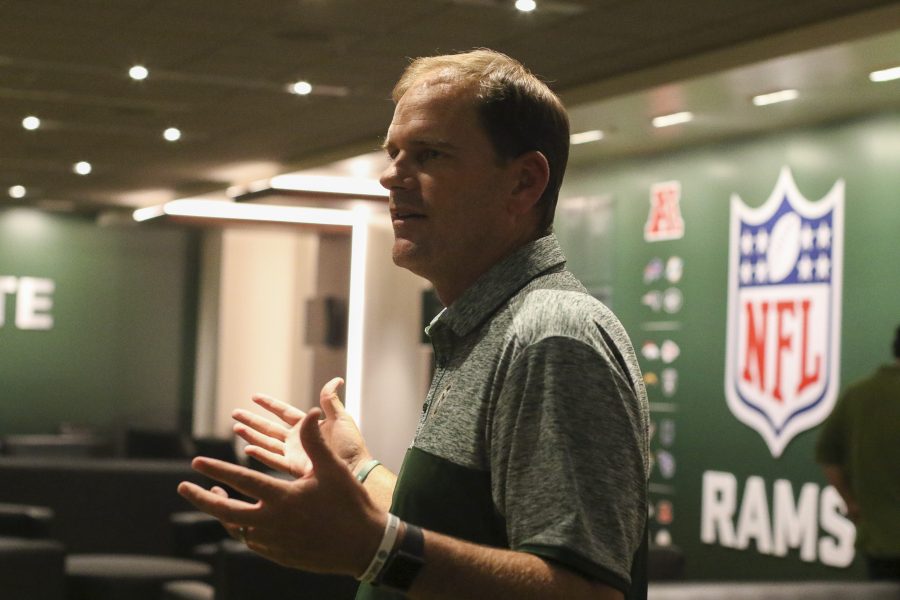 Head coach Mike Bobo talks about the new facilities and what they will do for the future of the program. (Javon Harris | Collegian)

The Colorado State football team will kick off the 2017 season against Oregon State at the new on-campus stadium in front of a sold out crowd of over 36,000 eager fans on Aug. 26. The matchup with the Beavers will mark the first time CSU has played a game on campus since 1967.

“Coach Anderson has done a great job there going on his third year,” Bobo said. “Offensively they probably have one of the biggest backfields in the country when you look at their size and the strength. The guy that comes to mind is (Ryan) Nall. He runs with power, he’s got great vision, he’s got balance, and he’s got straightaway speed. It’s going to be a big challenge for our defense in stopping the run.”

The Rams allowed 27.8 points per game in 2016, the 62nd best mark in the country. Defensively, the Rams return eight starters including linebackers Evan Colorito and Josh Watson. Despite the returning experience, the defense still has plenty to prove.

Oregon State named redshirt junior Jake Luton the starter. Luton, a 6-foot-7 quarterback who began his collegiate career at Idaho, will be the Beavers’ third opening game quarterback in the last three seasons. Although the relative lack of experience from Luton could be positive for the Rams, Bobo understands that Luton and Oregon State’s receivers have plenty of play-making potential.

“(Luton) can throw the ball around and they’ve got adequate to really good receivers,” Bobo said. “They can make plays down the field, so they’re scary offensively, and it all starts with their running game.”

On offense, the Rams return all of their key offensive weapons from the 2016 season. Running backs Dalyn Dawkins, Izzy Matthews and Marvin Kinsey Jr. each finished within the top 20 rushers in the Mountain West.

Starting quarterback Nick Stevens will also have the luxury of finding wide receiver Michael Gallup down the field once again this season. Gallup, who was CSU’s leading receiver in 2016, led the way in the Mountain West with 14 receiving touchdowns. He also finished second in the conference in both receptions (76) and receiving yards (1,272) en route to preseason All-MW first team recognition.

They will be going up against an Oregon State defense that had some troubles throughout last season. The Beavers allowed 32.6 points per game in 2016 (89th best) and return their second leading tackler, Manase Hungalu.

In the secondary, sophomore Xavier Crawford figures to be another leader on the Beavers’ defense. During his freshman season, Crawford started all 12 games and was named a freshman All-American.

“Defensively, they do a great job of playing in their 3-4 defense and bringing a number of blitzes and running a number of coverages behind those blitzes,” Bobo said. “It will be a big challenge for us offensively in communication, identifying guys and putting a hat on the right guys. Whether that’s in protection or the run game, we’ve got to be able to communicate.”

Though Oregon State won its final two games of the 2016 season, the Beavers failed to make a bowl game for the third consecutive season. Oregon State finished 4-8 and went 3-6 in Pac-12 play under head coach Gary Andersen.

While the Rams return 14 starters overall and plenty of their bench depth from 2016, they also welcome an incoming freshmen class that includes 12 three-star recruits. The group of freshmen is highlighted by defensive tackle Ellison Hubbard, cornerback Christian Cumber, running back Marcus McElroy and wide receiver Warren Jackson. All chose CSU despite receiving scholarship offers from power five programs.

There is no questioning the talent that CSU can put on the field. Now they just have to respond.

“It’s gonna be a big challenge. We’re playing a football team that has size, that has speed, they’re well-coached. This is their first game of the season, too. They’re excited, I’m sure they’re preparing just like we are.”