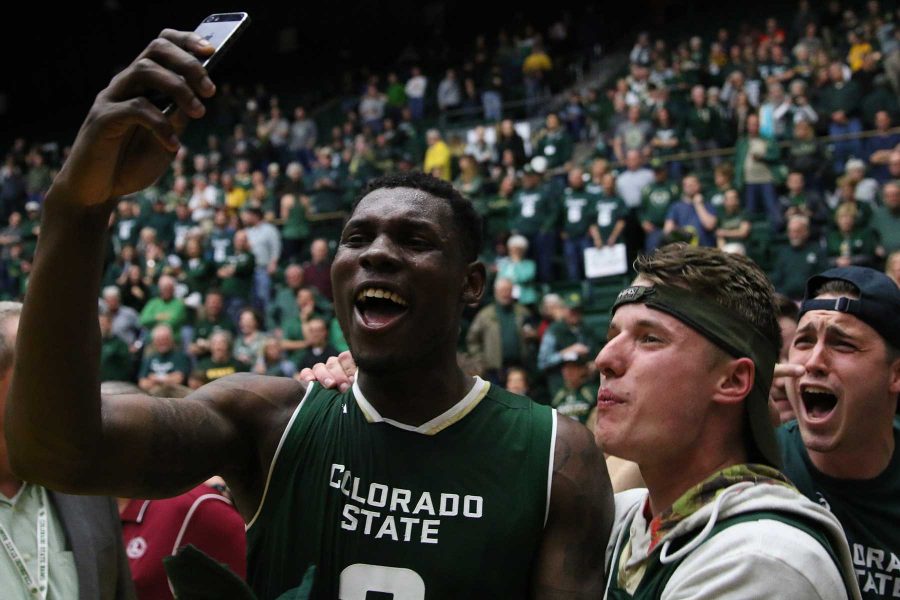 “I just want to thank God for making this day come true and being able to live the dream by getting paid for what I love to do,” Omogbo said.

Omogbo spent just two seasons in Fort Collins, but the 6-foot-8 big man from Hyattsville, Md. can be found all over the Rams’ history books, ranking in CSU’s top-20 list in every major rebounding category and setting a Mountain West record with 13 double-doubles during conference play last season. For his efforts, he was named to both the All-Mountain West First Team and MW All-Defensive team.

Omogbo recently played in the NBA Summer League with the Golden State Warriors, averaging just under five minutes per game. Omogbo explained that he was grateful to the Warriors for giving him an opportunity to come to Las Vegas and participate in Summer League, but it was tough to separate himself from the crowd, given his playing time.

If he had an opportunity to play around 20 minutes each night, Omogbo believes that he would likely be on an NBA roster right now.

While the big man enjoyed the novelty of playing in the the NBA, even if it was just technically exhibition contests, the former Ram believes that going overseas is the best thing for his career at the moment.

After the conclusion of Summer League, Omogbo did receive interest from multiple professional teams both home and abroad, including the Chicago Bulls and AEK Athens (Greece). Going to Italy made the most sense though, based on the financial terms and length of the deal.

“Emmanuel is like a son to both myself and my wife Lana,” head coach Larry Eustachy said in a release.

“Although I think he’s an NBA player, he chose to go overseas for a guaranteed contract, as he has always looked after his family first. Emmanuel has always worked extremely hard to overcome every obstacle that has come his way. I am very happy to see his hard work pay off and excited to see all that this young man will accomplish at the next level. I believe this is a giant step for him and eventually will lead to the NBA. We are extremely proud of him and what he brought the Colorado State family, and we will continue to stay in contact with him.”

By signing a one-year deal with Victoria Libertas Pallacanestro, Omogbo also has the opportunity to continue refining his offensive game and work on being a more versatile scorer this year, while still being able to come back home next summer to make another run at the NBA.

If he is going to do so, Omogbo knows he is going to need to continue to improve his jump shot. Omogbo’s shooting percentage from beyond the arc increased by 13 percent his senior season, but he knows that being able to shoot the ball consistently will be crucial to his success at the next level.

“I feel like I get enough shots up,” Omogbo said. “When the game comes I need to not even think about it and just shoot, especially if I miss one. That is what makes guards such good scorers… I always feel like I need to make the perfect play on the court, instead of just playing basketball. You’re going to make mistakes at times, but just go out there and score and rebound.”

Joining Omogbo in Italy will be Dallas Moore (North Florida) and Eric Mika (Brigham Young University). Moore worked out in Denver with Omogbo this summer, prior to playing for the Nuggets in the Las Vegas summer league.

While Omogbo is more than ready to start playing with his new teammates in Italy, he explained that he will always have an appreciation for the Fort Collins community and all the support they showed him over the last two years.

“I have more of a bond with the fans at CSU,” Omogbo said. “I am going to miss that about Fort Collins and Denver.”