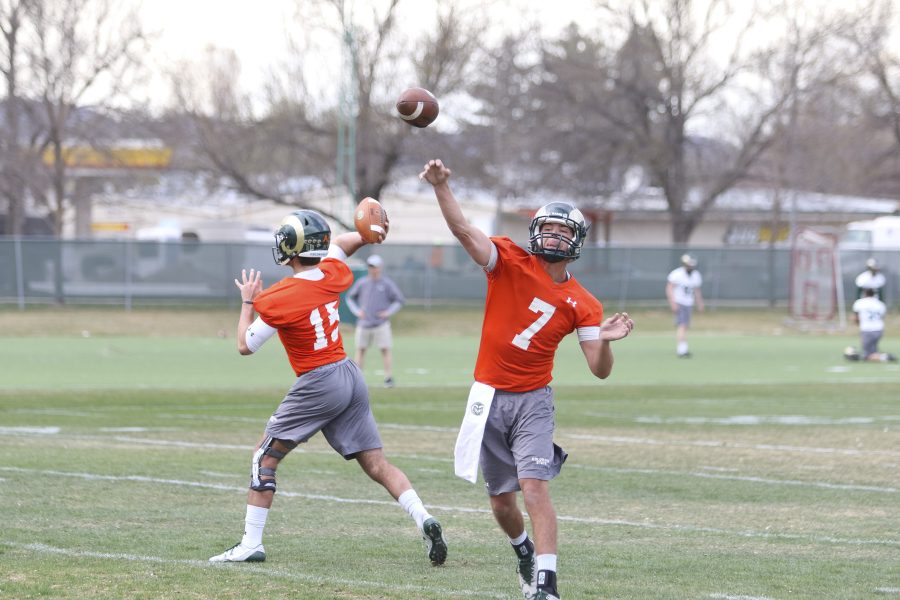 Nick Stevens (7) and Colin Hill (15) both throw passes during a couple Quarterback drills during their spring practice. (Javon Harris | Collegian)

The Colorado State football program is set to take its next major step towards bringing football back to campus. Before ushering in the 2017 regular season on Aug. 26 against Oregon State, the Rams will participate in preseason camp beginning on July 28. Preseason camp consists of at least 19 practices and two scrimmages. The first scrimmage of camp will take place during CSU’s community open house event on Aug. 5 where fans will get their first look inside the new on-campus stadium.

With the addition of the stadium comes a new practice facility for the Rams, too. No longer will the team practice adjacent to the intramural fields in the middle of CSU’s campus. Instead, they will conduct all preseason training in their new facilities.

Amid all of the excitement surrounding the new stadium, Mike Bobo and his Rams are excited to finally get back to football. Though it is difficult to take away much from practices, preseason camp offers plenty of opportunities to examine the team’s growth and preparation. Now just days away from the beginning of camp, here is a brief look at where the Rams stand entering the 2017 season, and some of the more important storylines to follow.

Looking to prove that the triumphs in the second half of 2016 were not a fluke, expectations for an experienced CSU offense are quite high. After struggling to find its rhythm on offense early last year, CSU quite literally had one of the best offenses in the nation over the final six weeks of the season. During that stretch, CSU ranked second nationally in scoring offense (47.8 points per game) and fourth in offensive yardage (533.8 yards per game).

What’s more, the Rams return six offensive starters, including their leading passer, all three contributing rushers and their top two receivers from a season ago.

Projected starting quarterback Nick Stevens demonstrated the ability to successfully lead the offense after returning as the starting quarterback in week seven last year. Dalyn Dawkins and Izzy Matthews lead a rushing unit that returns an incredible 93.9 percent of its rushing yardage from 2016. Preseason All-Mountain West receiver Michael Gallup comes in as the conference’s best wide receiver based on production from last season and is joined on the outside by Olabisi Johnson and Dietrich Clark.

On the offensive line, Jake Bennett, who was also selected to the preseason All-MW team, and Zack Golditch figure to lead a unit that arguably lost the most leadership of any position on the team.

At tight end, both Danny Nwosu and Nolan Peralta have departed, leaving a chance for senior Dalton Fackrell and freshman Griffin Hammer to work their way into the mix. John Freismuth has also moved from wide receiver to tight end and could work his way into the rotation as well.

The Rams ranked in the middle of the pack in the MW in most defensive categories in 2016. CSU ranked sixth in the conference in both scoring defense (30.4 points per game) and yards allowed (404.8 yards per game). While the Rams were inconsistent, they did display flashes dominance last year, the most noteworthy of which coming in a shutout victory against Fresno State.

The defense returns eight of its 11 starters from a season ago. At the linebacker position, Josh Watson, Evan Colorito and Tre Thomas were three of the team’s eight leading tacklers. Add in the return of redshirt senior Deonte Clyburn to the Rams’ 3-4 defense, and the linebacker corps figures to be a daunting task for opposing offenses.

Toby McBride established himself as a difference maker at defensive end, leading the team in sacks. Playing alongside Darnell Thompson and Jakob Buys, the second and third leading sackers from last season, an experienced defensive line is in store for 2017.

In the secondary, safeties Jake Schlager and Jamal Hicks along with cornerback Kevin Nutt offer the Rams more experience in the defensive backfield. Highly touted 2017 recruit, Christian Cumber will look to work his way into the lineup as well.

Deonte Clyburn’s return to football offers much more than a talent boost on the field. After missing all of last season with a blood-clot condition, Clyburn was cleared to return to the team prior to spring football. He is one of the Rams’ most important emotional leaders, both on and off the field. If Clyburn can return to his 2015 form when he was the team’s fourth leading tackler, the Rams defense could receive an even bigger upgrade than what he has already provided.

On the offensive line, the development of players other than Bennett and Golditch will be vital. The Rams lost three starters on the line, including All-MW guard Fred Zerblis and honorable mentions Nick Callender and Paul Thurston.

Among the five formal position changes announced before the season, Anthony Hawkins’ move from wide receiver to cornerback might be the most significant. An unproven secondary for the Rams’ suggests that there is plenty of playing time up for grabs. Hawkins along with sophomore Robert Awunganyi, Shun Johnson and true freshman Christian Cumber could all get a chance to prove themselves throughout camp.