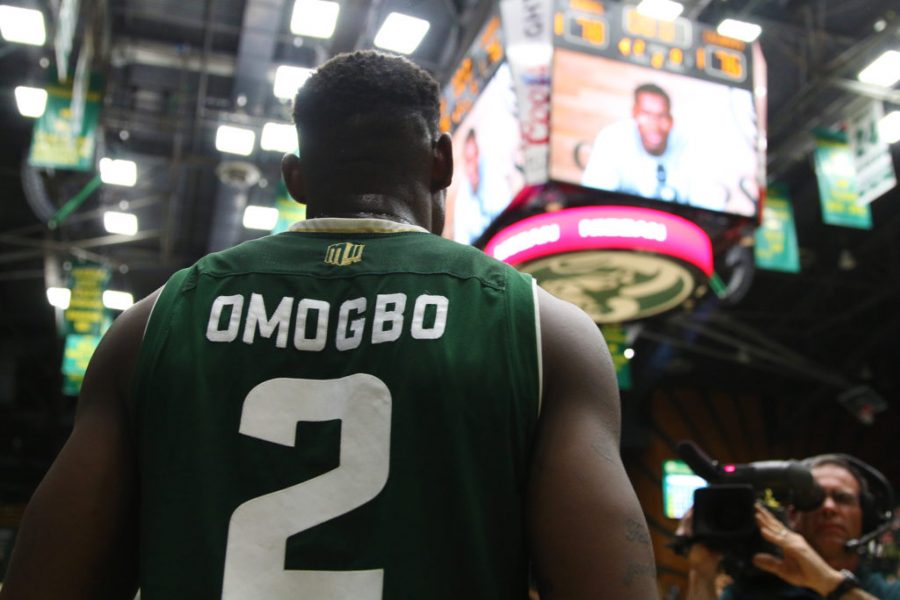 CSU Senior Emmanuel Omogbo stands and watches his video on the jumbotron before being honored at Senior Night on February 28. (Elliott Jerge | Collegian)

After not hearing his name called in the NBA Draft last week, former Colorado State forward Emmanuel Omogbo has agreed to terms with the Golden State Warriors to play in the NBA summer league with the 2017 world champions in Las Vegas this July.

“I want to thank God for everything,” Omogbo said. “I want to thank everyone for sticking it out with me and just grinding out through this situation. My family for never letting me put my head down.”

Subsequently going undrafted and seeing CSU teammate Gian Clavell sign with the Miami Heat last weekend, the process took slightly longer than the big man would have hoped for. Through it all though, Omogbo remained patient and humble, and now he is now looking forward to the challenge of working with one of the league’s most elite franchises.

“I’ve just been trying to take advantage of my opportunities,” Omogbo said. “ I’ve been working and it’s finally here… There was a moment where I broke down when I was talking to my sisters. I felt like I had put in all this work to set myself up to be in this position and it was not going to be enough.”

Now that Omogbo knows where he will be playing this summer, the Maryland native can enjoy the moment of seeing his childhood dreams of playing professional basketball come to fruition. He knows that the work is really just getting started though.

“I just have to go out out there and prove myself. I cannot be too happy. Well, I can be a little bit happy,” Omogbo said with a chirp in his voice.

In only two seasons at Colorado State, Omogbo quickly worked his way through the history books, leaving as one of the most prolific rebounders in the program’s history.

Omogbo recorded a career-high 24 points in the Rams road victory over San Diego State on Jan. 28. One month later the Aztecs and Rams faced off again in Moby Arena. In the game, CSU was able to overcome a 12 point deficit for a second time that season, with Omogbo ultimately securing the 56-55 victory with a buzzer-beating 3-point shot.

Omogbo will join the Warriors early next week and is excited to be on a team with so much young depth. “Everybody has to come in and work, “Omogbo said. “You have to work for your playing time. You’re not guaranteed anything and I like that. You show what kind of playing time you want by going out there and working.”

The Warriors will kick off summer league action against the Philadelphia 76ers on Saturday, July 8 at 7:30 p.m. (PDT) at the Thomas & Mack Center on the UNLV campus. The league’s annual developmental league will run from July 7-17, with the Warriors looking to defend last year’s summer league championship.

Collegian Sports Director Justin Michael can be reached by email at jmichael@collegian.com or Twitter @JustinTMichael.