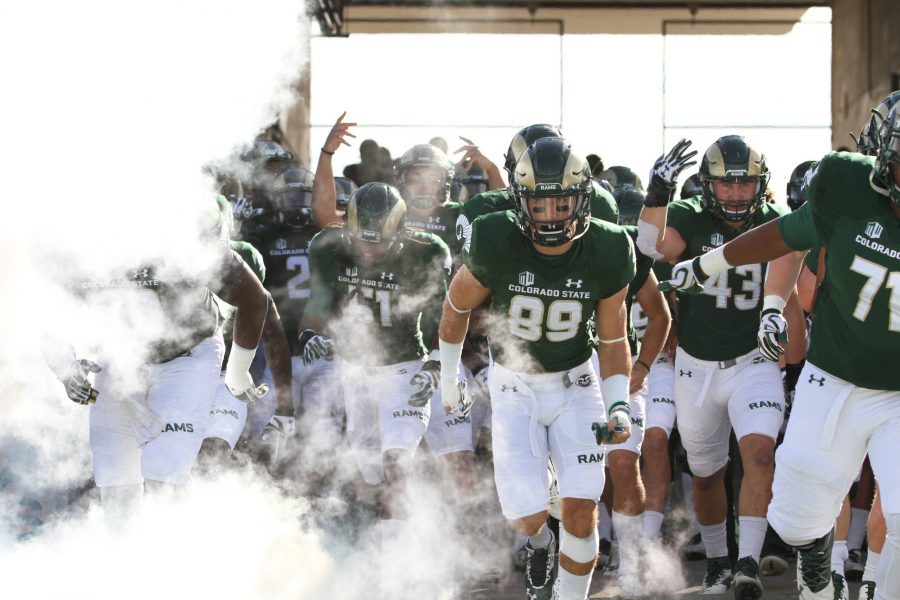 Robert Ruiz (89) and other CSU football players before the start of their game against Fresno State. (Javon Harris | Collegian)

According to current schedules, the contest with the Beavers is slated to be the first game of the 2017 college football season, as none of the other four games involving FBS teams on Aug. 26 are currently scheduled to kickoff before noon.

“The game, which will serve as the grand opening of CSU’s on-campus stadium, was originally scheduled to kickoff at 1 p.m. MT. Viewable by a national audience on CBS Sports Network, the Aug. 26 matchup will be the first of nine games, currently scheduled on national television.

“There is great anticipation and excitement for this historic first game in our new, on-campus stadium,” Colorado State Athletic Director Joe Parker said in a release. “To be the first kickoff of the 2017 college football season is an appropriate distinction in a day of many firsts. We are excited and eager to host this historic event, and appreciate CBS Sports Network presenting this game to a national audience.”

Along with the Rams, a pair of fellow Mountain West schools will also open their 2017 season on Aug. 26. Hawaii will play at UMass and San Jose State will host South Florida on the first official weekend of the season. Two other FBS games are scheduled for Aug. 26: Stanford vs. Rice in Sydney, Australia, and Portland State at BYU.

“We were already excited to open our new stadium and to play Oregon State, and now we are even more excited to host the first kickoff of the season,” Head Coach Mike Bobo said in a release. “We are very appreciative of the great support of our fans and our community, and we look forward to representing Colorado State University on this historic day before a national audience.”