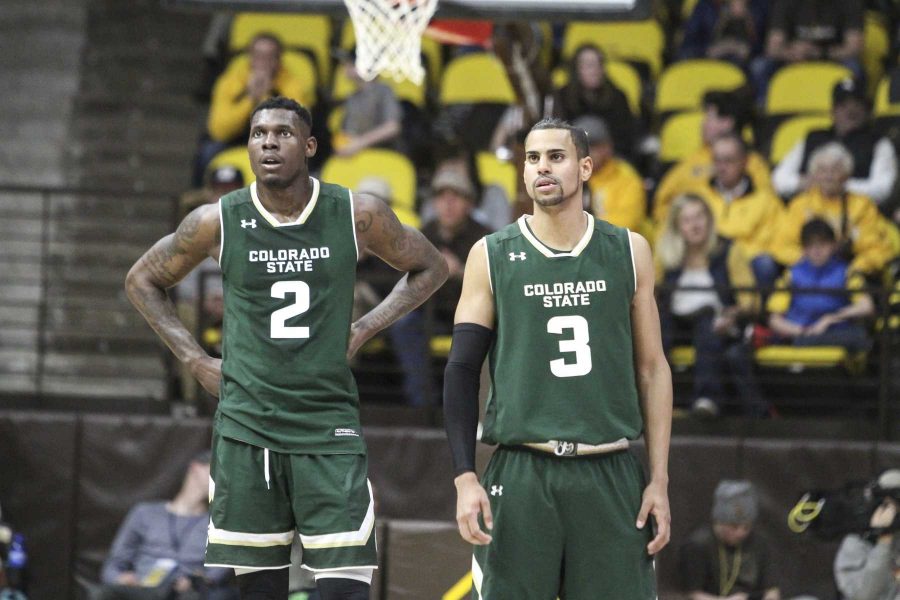 CSU's Dynamic Duo in Gian Clavell (3) and Emmanuel Omogbo (2) look towards the scoreboard during the Rams 78-73 win over rival Wyoming in Laramie. Clavell and Omogbo finished with a combined 39 points. (Javon Harris | Collegian)

After leading the Colorado State Rams to an overall record of 24-12, the program’s first Mountain West Tournament Championship game in over a decade and eventually reaching the second round of the NIT, CSU’s dynamic duo of Gian Clavell and Emmanuel Omogbo are now attempting to achieve lifelong goals of reaching the NBA.

The NBA Draft begins Thursday night, and Clavell and Omogbo are hoping to be one of 60 players that see their childhood dreams come to fruition and hear their names called out by NBA commissioner Adam Silver.

Omogbo was one of the most dominant rebounders in Colorado State men’s basketball history. His counterpart, Clavell was the most gifted scorer the program has seen in years. Their paths to the next level, however, are potentially unconventional and dubious, as the only former Ram active in the NBA is Jason Smith (Washington Wizards).

That being said, having shattered the expectations of those that followed CSU hoops last season, Clavell and Omogbo are hoping to do more of the same when it comes to proving the nonbelievers wrong.

Here is a rundown of each of their illustrious collegiate careers, as well as insight into how their games would translate to the next level.

Omogbo finished his Colorado State career with 28 double-doubles in just 69 games played. Despite only playing two seasons with the green and gold, Omogbo is firmly etched in CSU hoops history.

The 6-foot-8 forward from Hyattsville, Maryland set a conference record with 13 double-doubles in conference play in 2016-17, while also setting single season school records for defensive rebounds in a single season (273) and double-doubles (20). Omogbo finished the season as the league’s best rebounder, averaging 10.4 per game.

Much more than just a piece to fill the lane and bring down rebounds, Omogbo also proved to be a menace for opponents offensively. The big man finished the season third in the conference with a scoring percentage just shy of 50 percent (.482), and scored in double digits in 22 consecutive games.

Known for being a force down low, Omogbo displayed a much more versatile game in 2016-17 than in years past. Improving his field goal percentage on 3-point attempts from 22 percent in 2015-16 to 35 percent last season proved invaluable for the Rams. Omogbo’s ability to open up the floor and hit shots from deep played a crucial role in the Rams’ offense.

In CSU’s first road win over San Diego State since 2003 (Jan. 28), Omogbo scored a career-high 24 points, 12 of which came from successful 3-point attempts. After that game, Omogbo went on to hit at least one shot from beyond the arc in eight consecutive games. More importantly, he displayed high basketball IQ by only shooting from deep when advantageous, with a 3-point field goal goal percentage of at least .500 in five of those games.

While Omogbo would not likely be selected for his offensive prowess, the fact that he has developed some sort of outside game can only help his chances of succeeding in the modern league.

Undoubtedly a fan favorite in Fort Collins for his dedication to the program, Omogbo’s toughness and raw determination is what set him apart from the pack last season. Living through tragedies that would have crippled most men, Omogbo continued to become a better basketball player.

It may also be what makes him an intriguing professional prospect. If there was ever a question about his love for the game, just look at Jan. 20, 2016, when Omogbo chose to suit up and play in the game at Air Force, despite losing his family in a house fire just a few days prior.

Omogbo is the type of player that leaves it all out on the court. He is an excellent rebounder, an efficient offensive player and has an unquestionable love for the game. His relentlessness makes him exhausting for opponents to deal with on both ends of the floor and he has the work ethic to succeed.

If he has any detriments, it is likely going be his size. The reality is that he lacks the size of a traditional big man in the league. Although he does have the ability to hit open jump shots, playing in the 3 role seems detrimental to what he does best, which is get rebounds.

Ultimately, Omogbo’s chances of being drafted are slim but his athleticism and tenacity on the boards will likely get him some extended looks in the NBA summer league from July 7-17.

If things do not pan out in the summer league, Omogbo will likely have a plethora of suitors overseas. The big man has already received one multi-year offer to play professionally in Greece and more will likely come as he continues to get more exposure.

Clavell leaves CSU as the reigning MW Player of the Year, along with a litany of accolades that include First Team All-Conference and All-MW Defensive honors.

In what was one of the most dominant single seasons by an individual player, Clavell led the MW in league scoring with an average of 20.4 points per-game in 2016-17, scoring 30-plus points in four games.

At 6 feet 3 inches, Clavell lacks the height of a traditional NBA guard. Father time is not exactly on his side either, as Clavell is quite a bit older (23 years old) than teams in the association traditionally like to start developing players at.

Really there is nothing that Clavell cannot do, though. Clavell thrives in the isolation game, which allows him to create scoring opportunities for himself virtually anywhere on the floor.

In three years at CSU, Clavell’s field goal percentage from inside the arc was roughly 47 percent, while he was a 36 percent shooter from 3 point territory. His ability to hit from deep often led defenses to come out too far on him. When that happens, he has the touch to beat his man off the dribble and finish off the glass.

Defensively, Clavell is an incredibly stout player and manages to be aggressive without playing careless. He displayed this throughout the 2016-17 campaign, averaging two steals per game. When it comes to rebounding, Clavell uses his athleticism to out-leap bigger defenders for the ball. Although he is not known for rebounding, he can consistently make an impact of this phase of the game, as he averaged five boards per game in his CSU career.

Clavell has seen his draft stock rise this summer, working out for the previously listed teams and meeting with others including the Cavaliers, Spurs and Timberwolves. Clavell knows that he is considered an underdog, but that has not affected the confidence he has in himself or his game in the slightest.

“I know I am good enough to play in the NBA,” Clavell told The Collegian earlier this summer.

Much like Omogbo, if things do not work out for Clavell in the states, he has the potential to be an extremely successful professional player overseas.

The 2017 NBA Draft will take place Thursday, June 22 in Brooklyn, NY. The event begins at 5 p.m. MT and will be televised nationally on ESPN.