The Rocky Mountain Collegian • May 8, 2017 • https://collegian.com/articles/sports/2017/05/reflection-cassidy-denny-story/

Most impactful stories: Cassidy Denny leads CSU on and off the court 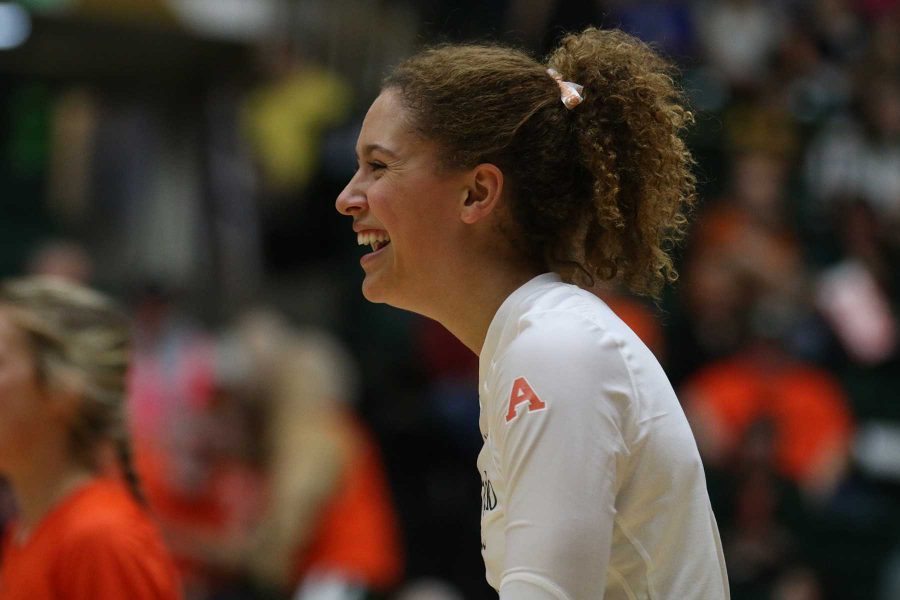 Senior Cassidy Denny has a huge smile on her face during a game against Utah State. CSU won in three sets. (Elliott Jerge | Collegian)

To be completely candid, when I’m covering a sporting event I sometimes find myself wondering what the significance of the game being played out in front of me is. If we broke the games down in over-simplistic terms, they honestly sound silly. A team attempts to throw an orange object into a cylinder that stands 10 feet high. Another team tries to slide a smallli black puck across a sheet of ice in hopes of getting it past a heavily padded guy blocking the net.

When stated this way, the games seem strange. The point of it all sometimes escapes me. Why do people pay decent amounts of money to watch? Why do people tune in on TV? Why does anyone care?

I’m not sure what the answer to those questions are. There’s likely several valid ones. But I suspect one reason is because of the athletes. People want to see them perform. They want to witness their talent.

And they want to connect with them and know them in one way or another. That is undoubtedly my favorite part of this job. I get to connect the players to the people and tell stories.

That’s what happened this past season with CSU volleyball’s senior libero Cassidy Denny. As the team’s lone senior, Denny was the natural leader of the team, both on and off the court. But there was more to it than that.

She’s energetic, talkative and outspoken. Not just about volleyball, but about her observations of racial injustice taking place in this country. The Sacramento, Calif. native doesn’t back away from discussing these topics. Instead of keeping these thoughts bottled up like one might expect of a student-athlete, she uses her platform as a well-known volleyball player to inspire other students and females to advocate for change and start conversations.

She has a voice and a platform, and she uses it. Regardless of personal opinions or political preferences, this is something to be respected.

The story also included a mini-chapter on her role as “Team Mom,” a role amplified by the six true freshman the Rams had this year. It also dove into her tight-knit relationship with her best friend and teammate, Jasmine Hanna.

It may sound cliché, but this story wrote itself. The couple hours spent writing it went by in a flash. That’s what good stories, good music and good sports tend to do. They freeze time.

And I’m glad I got to tell one of them.

Collegian sports reporter Michael Roley can be reached by email at sports@collegian.com or Twitter @michael_roley.