The Rocky Mountain Collegian • May 12, 2017 • https://collegian.com/articles/sports/2017/05/rams-unable-to-climb-out-of-early-hole-in-loss-to-fresno-state/ 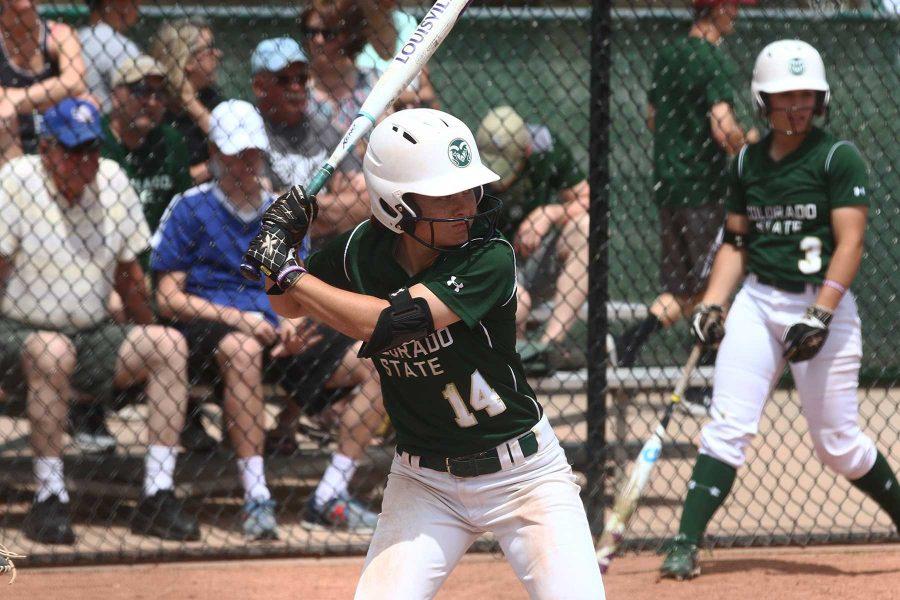 Colorado State Second Basemen Taryn Arcarese is up to bat against South Dakota on Sunday May 7, 2017. (Elliott Jerge | Collegian)

The Colorado State Rams dropped game two of their series with the Fresno State Bulldogs 7-2 on Friday as the Rams were unable to capitalize with runners on base.

The Rams (28-21, 9-14 MW) took game one over the Bulldogs (33-21, 13-9 MW) on Thursday, 5-3, despite being out hit in the game. On Friday, the Rams were able to get seven hits off of Kamalani Dung who pitched all of game one and came into the weekend off of back-to-back MW Pitcher of the Week awards. Those seven hits only produced two runs for the Rams, however, as they left runners on base throughout the game.

“We had a lot fewer strikeouts so that really helped us,” head coach Jen Fisher said after Dung struck out 10 batters on Thursday. “We were putting the ball in play…it just took us too long to get going and even then we had kind of dug ourselves too big of a hole.”

Senior Haley Hutton was able to end her cold streak with a one out triple in the bottom of the fifth with her team down 6-0. Senior Taryn Arcarese and junior Madison Kilcrease could not bring her home though as they both grounded out on short hit balls to the infield.

Junior Larisa Petakoff started the game but struggled from the beginning as she hit the first batter of the game before giving up a two run home run to right field two batters later. Her bad day continued in the second inning when the Bulldogs put runners on second and third with one out. Fresno State took advantage and hit a double and back-to-back singles that brought home three more runs to give them a 5-0 lead.

Junior Kaylynn Pierce would come in to relieve Petakoff and allowed only two more runs the rest of the game, giving the Rams a chance to mount a comeback.

“Kaylynn really did a great job of keeping us in it and just giving us a shot,” Fisher said. “I kept saying ‘just give us a shot, just give us a shot.’ We were down six runs but I thought there is so much game left as long as we don’t get into a run rule situation we might have a chance to chip away.”

The offense finally came through in the sixth inning when sophomore Amber Nelson led off with a double. Junior Hannah McCorkhill singled and Lauren Buchanan followed her up with an RBI single. Sophomore Bridgette Hutton then grounded out to the pitcher but it allowed the Rams to bring home one more and put Buchanan on third with one out.

That would be it for the Rams though as juniors Danni Klein and Hayleigh Evans could not find a way on and the Rams went down in order in the seventh.

Haley Hutton’s triple pulled her within two hits of the all-time CSU record. Pierce was also able to pitch against her former head coach as the UC Riverside transfer met up with Fresno State’s head coach Linda Garza who is in her first year coaching the Bulldogs after moving over from UC Riverside last year.

Despite the friendly faces, the Rams will look to take the final game of the season against the perennial powerhouse Bulldogs who own the second best RPI ranking in the MW (47).

“We want to show Fresno State that we’re somebody to contend with, somebody they should have to worry about,” Fisher said. “I think they seemed a little bit lose and a little bit like they’re not taking us seriously so that kind of makes you mad and puts a fire in your gut.”

The Rams will look to take it to the Bulldogs in their Senior Game on Saturday. The game will begin at 12 p.m. with a ceremony beforehand to celebrate seniors Haley Hutton and Taryn Arcarese.