The Rocky Mountain Collegian • May 4, 2017 • https://collegian.com/articles/sports/2017/05/rams-sign-forward-deion-james-to-national-letter-of-intent/ 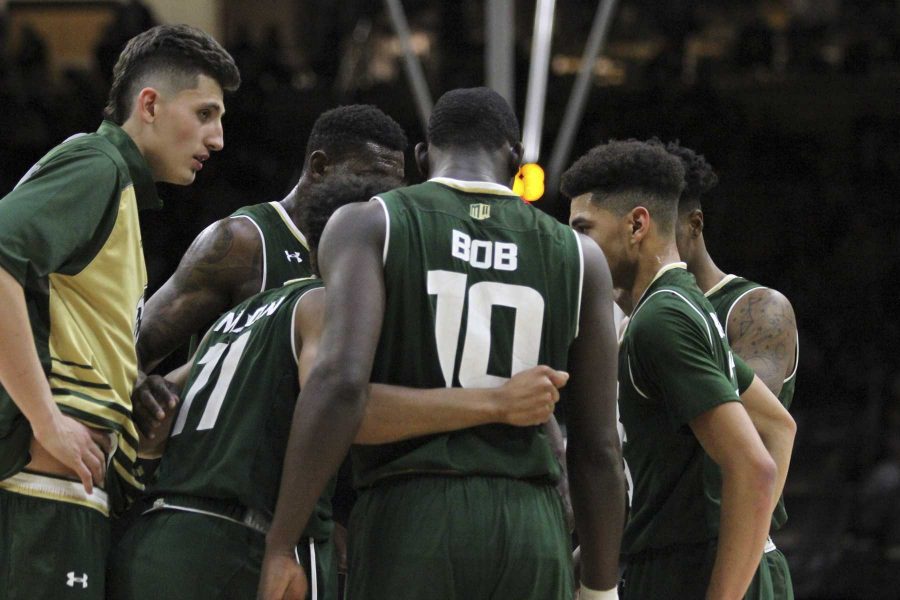 CSU Men's Basketball team during a timeout come together and discuss the game plan during the 2nd half of the Rams 72-58 win over rival CU. (Javon Harris | Collegian)

The 6-foot-8-inch forward has become an official member of the Rams after verbally committing to the program on Tuesday. James will have two years of eligibility remaining beginning in the 2017-18 season.

James earned NJCAA Division II Player of the Year honors after averaging 20.6 points and 9.6 rebounds per game as a 33-game starter for Pima Junior College last season. The forward also averaged 3.5 assists and one block per game on Pima.

James collected 20 double-doubles during his one season as a Pima Aztec. James also scored at least 20 points on 16 different occasions, including a single-game high 33 points against South Mountain Community College.

James’ single-game high in rebounds for Pima was 16, which he achieved in two separate games.

The forward was among the nation’s best in multiple categories during his one season with Pima. James cracked the top 10 nationally in points (680) and defensive rebounds (236). His 178 converted free throws also ranked sixth in the nation.

The Tucson, Arizona native committed to and played one season for Division 1 team North Carolina A&T upon graduation from Empire High School.

James’ playing time for North Carolina A&T was extremely limited. The forward came off the bench and played an average of 5.5 minutes in 21 games. In 115 total minutes as a freshman on North Carolina A&T, James averaged 1.3 points and 1.5 rebounds per contest.

At Empire High School, James’ effectiveness on the court was strikingly similar to his one season at Pima. As a senior, James scored 21.2 points and collected 12.2 rebounds per contest. The forward also averaged 21.1 points and 12.6 rebounds during his junior year in high school. In his four years of high school basketball, James averaged 16 points, 8.9 rebounds and 2.9 assists in 103 total games.

James earned All-Southern Arizona First Team honors when he was a senior and was selected to the Arizona Basketball Coaches Association Senior All-Star Game at the conclusion of his junior year.

James is the fifth player and third forward that Larry Eustachy’s staff has signed for the 2017-18 season. James becomes a member of a recruiting class that includes a pair of forwards, Logan Ryan and Alonzo Tyson, as well as a pair of guards, Raquan Mitchell and Kris Martin.

With a shallow backcourt after the graduation of Emmanuel Omogbo and transfer of Braden Koelliker, Larry Eustachy is pleased with the addition of James.

“We are extremely excited to add Deion to our program,” Eustachy said in a statement. “He brings a versatile skill set along with his size that isn’t something you see often. Not only was he the NJCAA Division II National Player of the Year, but he led his team to the most wins in school history as well as a berth in the national tournament. He is a winner and a team player that we are beyond excited to add to the family.”

Collegian sports reporter Eddie Herz can be reached by email at sports@collegian.com or by Twitter @Eddie_Herz.