The Rocky Mountain Collegian • May 1, 2017 • https://collegian.com/articles/sports/2017/05/nevada-sweeps-colorado-state-behind-two-walk-off-wins/ 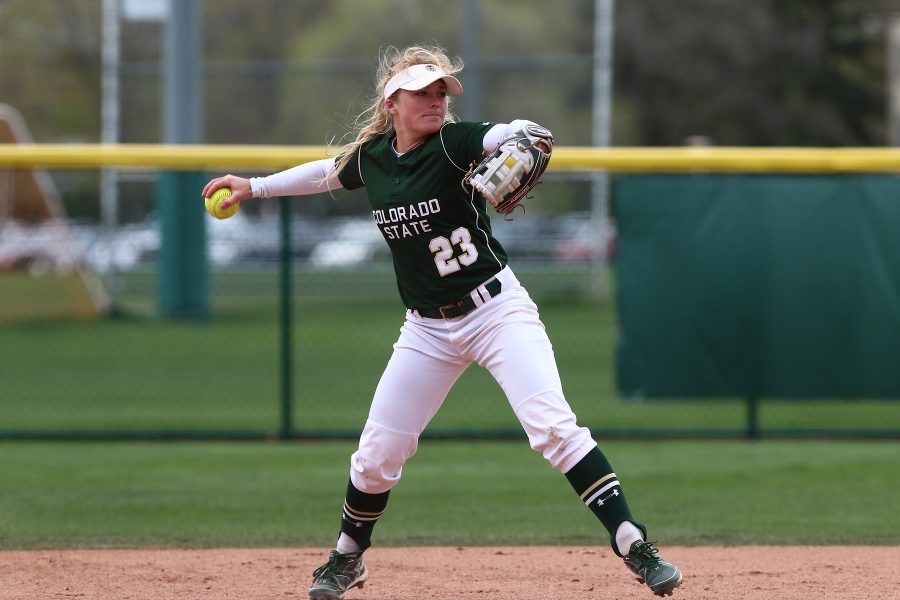 Colorado State Shortstop Haley Hutton makes a throw to first base during a game against UNLV on Friday April 21, 2017. (Elliott Jerge | Collegian)

The Nevada Wolfpack swept the Colorado State Rams over the weekend with three thrilling victories. After winning game one 5-4, the Wolfpack (26-19, 11-7 MW) won games two and three in walk-off fashion, including a 14-inning marathon on Saturday evening that ended in a score of 8-7.

“We played really pitch-by-pitch these last two games more than we have all year,” head coach Jen Fisher said. “It’s hard to really feel good walking away from that.”

The Rams (23-20, 8-13 MW) had a late lead in all three games, but could not close any of them out. In game one, Nevada scored twice in the bottom of the fifth inning off of a solo home run and an error by junior Madison Kilcrease. Meanwhile, the Rams were unable to take advantage of Nevada’s four defensive flubs by leaving 10 runners on base in the 5-4 loss.

Game two marked another heartbreaker as the Rams lost 8-7 in 14 innings, despite leading twice in extras.

Down 5-2 entering the sixth inning, the Rams rallied to send the game to extras. Junior Hannah McCorkhill hit a two-run home run to center field in the sixth and executed a sacrifice fly in the seventh to extend the game.

In the 10th inning, senior Haley Hutton put the Rams up by one with her RBI single. Nevada responded in the bottom half of the inning with a run of their own that pushed the game onward.

After three scoreless innings, Hayleigh Evans broke the drought with a RBI single to center field in the 14th inning. However, Nevada loaded the bases with two outs in the bottom half of the inning, bringing home two runs on a single up the middle to win the game.

On Sunday in game three, the Rams once again found themselves leading late in the game. Fisher relied upon her “housekeeper” Larisa Petakoff to close out the Wolfpack and avoid the sweep.

Nevada put runners on the corners with one out in the bottom half of the inning, putting pressure on Petakoff. The Wolfpack sent the Rams packing with a two RBI double to left center to complete the sweep.

“Hats off to (Nevada), they just beat us,” Fisher said. “We didn’t really beat ourselves, they just flat out beat us. They hit the ball in key situations a little bit better than we did. It’s hard to stomach for sure.”

McCorkhill still had an outstanding weekend, going 6-for-13 with six RBI in the three game stretch, including two home runs. She now leads the Rams in RBI with 38.

“(McCorkhill) looked comfortable this weekend and her preparation was there,” Fisher said. “I’m proud of her and the leadership she showed”

As it has been all season long, Haley Hutton inched her way closer to another CSU record. She is now only seven hits away from the most hits in CSU history and pulled into fourth place in career steals with 48.

Sophomore Bridgette Hutton, who came into the weekend as the reigning Mountain West Pitcher of the Week, was used heavily in game two when she pitched over nine innings, giving up six earned runs on 11 hits and nine walks.

The sweep drops the Rams to seventh place in conference and has eliminated them from the Mountain West title chase. The only hope for a bid to the NCAA tournament would be an at-large one, something the Mountain West has only done twice during the time it has included softball.

This was the last on the road series for the Rams this season. They will finish the season by hosting the Ram Classic this weekend during their conference bye week and end it with a home series against Fresno State. South Dakota and Texas Tech will be the Rams’ opponents for the Ram Classic as they will play each team twice. The action begins Saturday at 12:30 p.m. with their first game against Texas Tech.