The Rocky Mountain Collegian • May 1, 2017 • https://collegian.com/articles/sports/2017/05/csu-womens-tennis-season-ends-with-first-round-exit-in-mw-championship/ 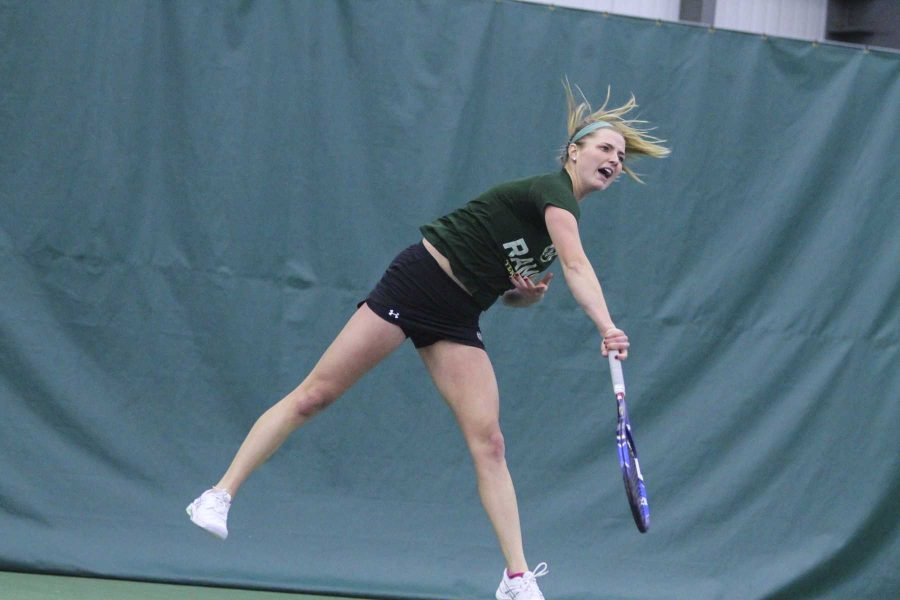 Senior Madison Porter returns a serve from the rival Colorado Buffaloes with force during her match at the Fort Collins Country Club on January 22nd. (Javon Harris | Collegian)

The No. 10 Colorado State women’s tennis team lost to the No. 7 Air Force Falcons in the first round of the Mountain West Championship.

The Rams were dominated in doubles play by the Falcons’ tandem of Elizabeth Barnickel and TJ Fumagalli, who entered the tournament undefeated in doubles play and as the No. 1 seed. They took down the Rams’ top duo of Alyssa Grijalva and Emily Kolbow by a score of 6-2. The No. 3 matchup yielded similar results as Air Force’s Lily Forlini and Nadeen Lieberman defeated Sandra Keta and Madison Porter.

The one point for the Rams came during singles as freshman Sandra Keta was able to get the Rams on the board. She won two hard-fought sets by a score of 7-6 (2) and 6-4 to keep the Rams’ hopes alive.

The rest of the Rams’ singles did not fair well, but they were able to keep the matches close. Senior Celine Voss lost in straight sets in the No. 5 spot, but both sets were tight at 7-5, 7-5. Freshman Solene Crawley made her opponent earn it by taking the first set easily 6-2 before losing the next two sets 6-3 and 6-4, respectively.

CSU’s No. 1 spot belonged to sophomore Emily Kolbow who could get nothing going in her straight set loss to the Falcons’ Chloe Forlini, losing 6-0, 6-3.

“We didn’t play very good doubles, but we came back hard in singles,” head coach Jarod Camerota said in a release. “I’m proud of how we played in singles and our resiliency. Early in the season, we wouldn’t rebound from a bad doubles match.”

The Rams are losing two seniors from the team, Voss and Porter, as their season comes to an end. The duo was able to win 53 total singles matches in their time at CSU and both have big plans after graduation.

“Madison and Celine are first-class role models for our program,” Camerota said. “If everyone did as much as they do, on and off the court, we’ll be in good shape moving forward.”

Next season is looking bright as a roster of three freshman and one sophomore, Kolbow, consistently held the No. 1-4 spots all season.

“I think that we’re starting to see the type of team we can be,” Camerota said. “Hopefully this fuels them during the summer and fall so that we can make a run next time we’re here.”