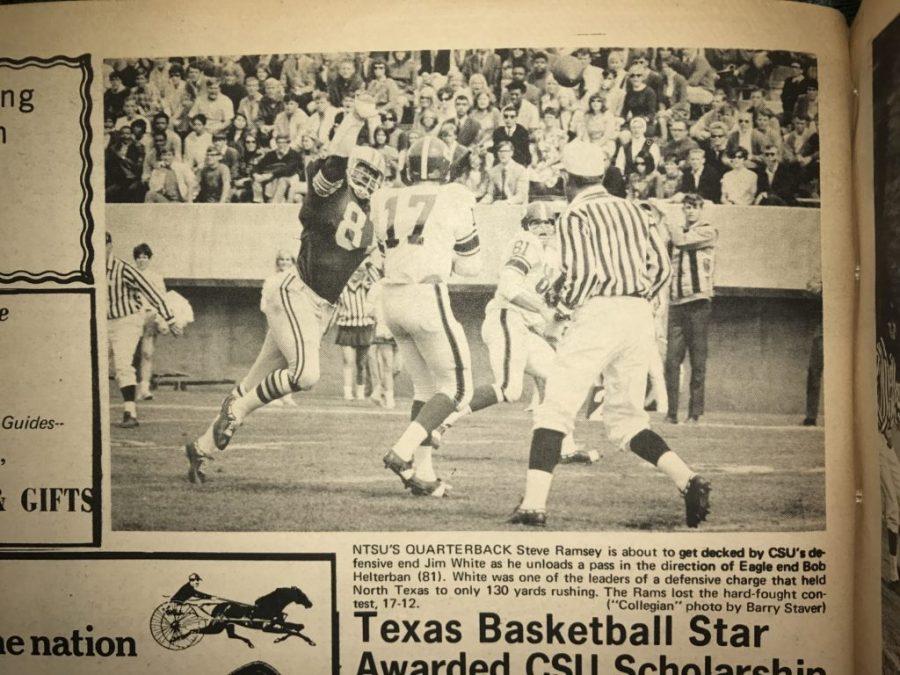 With Colorado State’s return to campus football coming April 22 for the Green and Gold game, Hughes Stadium is officially in the past, leaving 48 years of memories three miles west of campus.

The move back to campus brings a new culture, but it is important to remember how we got here. The Collegian sports desk will be sharing some of our archives of the more memorable moments in Hughes Stadium history to end the era and welcome Colorado State football back to campus.

The first memory we will revisit is Hughes’ first memory. Joe Greene and North Texas State crashed the grand opening of Hughes Stadium, escaping with a 17-12 victory over CSU.

The “Mean Green” of North Texas State University took advantage of a blocked punt, several key CSU errors and a host of Ram injuries to eke out a 17-12 victory over the Rams in CSU’s home opener in new Hughes Stadium before a crowd of 22,102.

It was a blocked punt by massive All-American tackle Joe Greene that gave the Eagles their final margin of victory over an inspired Ram team. NTSU defensive end Steve Atchley crashed in from the left side of the Ram offensive line to block Rod Downey’s punt attempt on the CSU 24-yard line. The ball bounced passed the goal line and the 275-pound Greene flattened the ball into the end zone turf for six points with 1:26 left in the third period. That gave Texas a 17-6 advantage that they never lost, despite a valiant fourth quarter effort by the Ram offense.

The first half proved to be a bruising defensive battle as both teams had numerous scoring opportunities thwarted by crisp hitting and tight pass defense. The Rams missed their first opportun

ity to cross the NTSU goal in when quarterback Jerry Montiel missed tight end Dick Morgan at the North Texas 5-yard line. CSU was forced to call in Tony Bugge to try a field goal form the NTS 10. Bugge’s kick went wide to the left and the Eagles took over.

The Rams moved the ball to the Eagle’s 10 in six plays behind the power of mini-fullback Bill Schmitz and several key receptions by Morgan.

A second Ram offensive drive was stymied late in the second quarter when tailback Charlie Piggee couldn’t find wingback Mac Brown on a double reverse and fumbled on the North Texas 17-yard line.

North Texas had driven to the CSU 5-yard line where the tough Ram defense forced the Eagles to try a field goal. Mike Gattis made good on his attempt from the 12 and the score stood at 3-0 for North Texas at the half.

In the third quarter, the Ram offense came alive-as it drove to the NTSU goal line and Montiel packed the leather across the chalk strip for the first CSU TD in the new stadium.

The Ram drive went 32 yards in nine plays after a North Texas personal foul on a punt put the ball on the Eagle 32-yard line. After loosing four yards on the first play from scrimmage, Montiel proceeded to move the Rams down the field with a series of keepers and a 14-yard pass play to tight end Dick Morgan.

Tailback Charlie Piggee hit the “Mean Green” defensive line on the next three plays, moving the ball to the 2-yard line.

Montiel then called his own number and ran it in for the Rams. Tony Bugge’s kick was wide to the left and the Rams were ahead by a 6-3 score.

From then on, Ram injuries and errors plagued the CSU squad. Wingback Mac Brown, who has filled in for the injured Larry “Lemon Juice” Jackson, was racked up by the Eagle defense and was lost to the Rams for the entire third period. Earlier Thomas, who had a couple of brilliant punt returns, sustained an ankle injury and was lost for the rest of the game.

The Eagles then hit for two quick scores, one following a fumble by CSU’s Charlie Piggee and the other on the blocked punt, to go ahead by a 17-6 score.

A spirited Ram offense fought their way back for the final touchdown behind the passing of Montiel. Montiel completed 3-of-5 attempts in the drive, including a 16-yard scoring toss to Dick Morgan.

The drive was highlighted by a 22-yard pass play from wingback Tim Labus to quarterback Jerry Montiel on what might be called the old “Here, you take it and pass to me” play.

After that, the “Mean Green” defense tightened up and stopped CSU’s last bid for a win. North Texas’ Jolly Green Giant, Joe Greene, had a big hand in stopping CSU’s offense as he threw Montiel for a 13-yard loss on the Rams’ last offensive drive.

Collegian sports desk can be reached by email at sports@collegian.com or on Twitter @RMCollegianSpts