Michael: Position groups to keep an eye on during the spring game 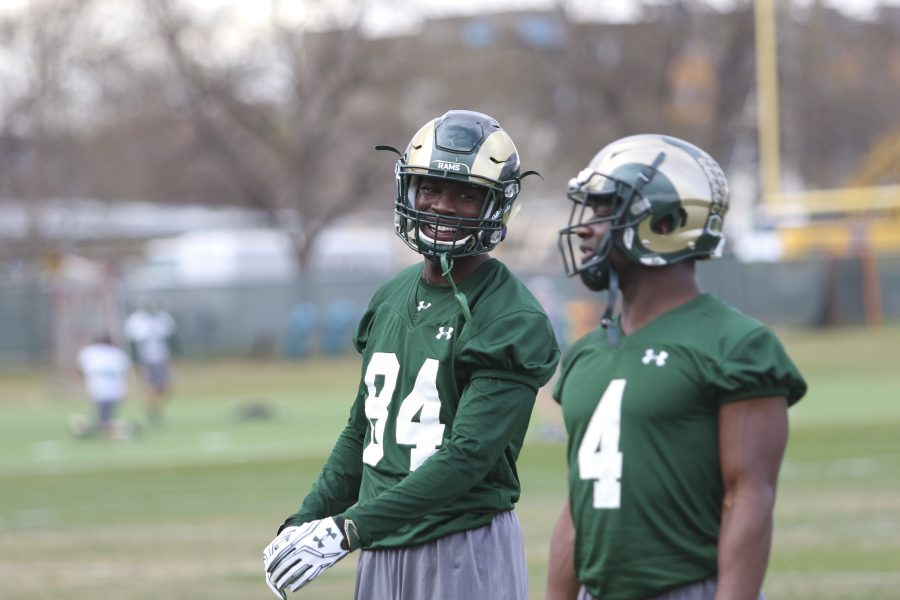 Preston Williams (84) and Michael Gallup (4) laugh with one another during the wide receiver drills at the spring practice. (Javon Harris | Collegian)

Colorado State football is now just a few months from opening its on-campus stadium, but before the Rams square off with Oregon State in their brand new home, the annual spring game will take place Saturday at the Lagoon.

The final chance for coaches to see the players on the field before the team is released for the summer, the Green and Gold Game may not count in the record books, but it can help influence what players receive reps when the team returns from break in late July.

Obviously fans should not buy into an inter-squad scrimmage too much, as you can only learn so much from what is essentially just a practice that is open to the general public. However, It is fair to say that this practice session counts a little more than the others.

When the Rams take the field this Saturday, these are the position groups that I will be following closely.

Colorado State returns one of the deepest backfields in the Mountain West with redshirt senior Dalyn Dawkins and junior Izzy Mathews. With true freshman Marvin Kinsey recovering from a torn ACL suffered late last season though, there is room for a pair of young bucks to break into the mix.

Darius May and Rashaad Boddie have both been impressive this spring after redshirting their freshman campaigns. Both are players to keep an eye on when the team is in full pads Saturday, as each will be in the mix for the number three depth chart spot, heading into the August.

All of the Ram faithful are justifiably excited about returning senior wide receiver Michael Gallup. Saturday will be the first chance of the 2017 season for the fans to see the Rams top target in action and whether he still has the strong connection with quarterback Nick Stevens.

Although Gallup is the obvious player to spotlight in this offense, I’m intrigued by the other junior college transfer, senior Detrich Clark and junior Olabisi Johnson.

Used primarily in sweep situations and quick pitches to the outside, Clark rushed for just under 250 yards in 2016. With head coach Mike Bobo looking to increase the team’s intermediate passing production, I expect the speedy wide out to play a much larger role as a slot receiver in the passing game this fall.

Much like Clark, Johnson often gets forgotten about when the spotlight is constantly on Gallup, but as he displayed with a record-setting performance in the bowl game last year, the junior from Lakewood, Colorado has serious big play potential. Also like Clark, I expect Johnson to play a larger role in the passing offense in 2017.

Look for both of these players to receive a heavy amount of reps in the spring game.

After losing Kevin Davis to graduation, Josh Watson and Tre Thomas will be expected to pick up the slack at linebacker. With a not-so-deep defensive line, production from these two will be important as ever.

Alongside Watson and Thomas will be Deonte Clyburn, whom will be returning to the gridiron after missing the entire 2016 season with a blood clot in his leg. Clyburn is currently sidelined with a minor knee injury, but is expected to be ready to go by the fall.

If this team is ever going to compete for a conference championship, the defense must improve against the run this season. Going up against the Rams running back stable on Saturday will be their first test.

Last but not least, we have the quarterbacks.

I put this position group last, because with Collin Hill currently still recovering from a torn ACL last Fall, the only quarterback that matters this weekend is Nick Stevens.

Stevens will still likely be competing for his starting gig when the team returns this fall, but dominating the defense for a third straight scrimmage would be a solid way for the veteran QB to close out the spring and further cement himself as the starter.