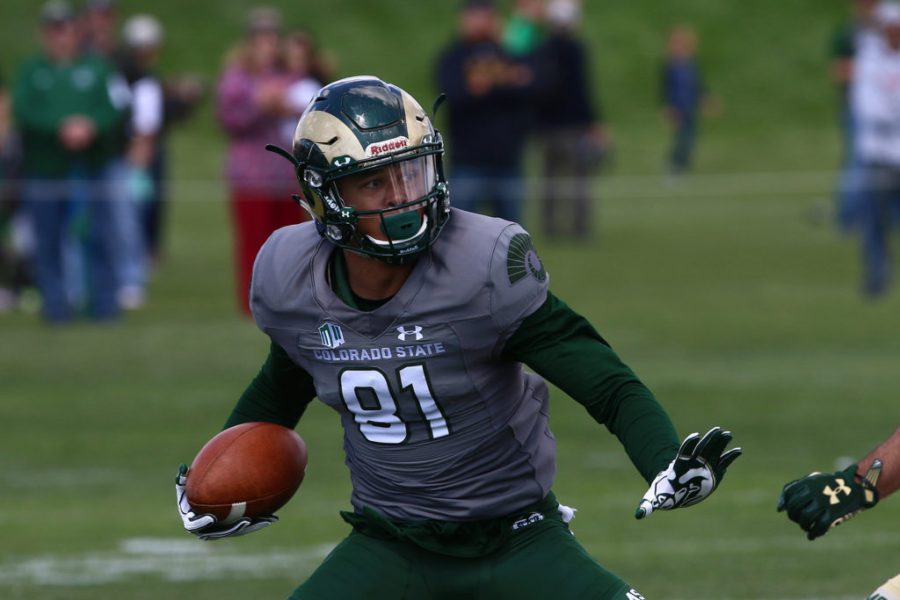 Colorado State football concluded its spring period Saturday with the annual Green and Gold game. After dominating throughout the practice period, including each of the first two scrimmages, the offense struggled to get much of anything going in the spring game and found itself facing a steep deficit heading into the third quarter .

Despite struggling to consistently execute the offense and turning the ball over four times, head coach Mike Bobo is extremely satisfied with the progress his offense made during the spring period.

“From an offensive standpoint, it has been one of the better springs that I have been around in my “x” number of years coaching,” Bobo said.

One of the primary reasons Bobo and the coaching staff view the spring period as a success is an improved intermediate passing attack.

On multiple occasions this spring, the third-year head coach referenced that he was pleased with the progress his quarterbacks and wide receivers were making in the mid-range passing offense. Even in a fairly weak offensive performance Saturday, it was obvious that this is an area the unit has improved upon.

Throughout the intrasquad scrimmage, the starting offense saw little success moving the ball, but when they were able to execute, it was primarily between the sticks with the passing game.

The biggest benefactor of this renewed focus on the intermediate passing game so far has been junior wide receiver Olabisi Johnson. After breaking out with a record-setting performance in the Idaho Potato Bowl last December, Johnson has impressed throughout the spring period and feasted against the opposing defense Saturday.

Johnson made plays all over the field, none more important than a five yard touchdown reception to secure a victory for the Green team (offense). Perhaps the most impressive aspect of Johnson’s performance on Saturday was the variety of routes he was able to use to get open and how even when the defender was in position to make a play on the ball, it did not seem to matter.

“Except for a couple hitches, a lot of his catches over the middle were contested,” Bobo said. “It was good to see DBs in position. Justin Sweet had tight coverage on him a lot of the time, but Bisi made the tough catch. Going back to what we talked about last week, I’m really proud of Bisi and what he has been doing.”

Bobo was referring to his earlier praise of Johnson, when he stated that he was proud of the young wide receiver for continuing to grind and setting the standard of what it means to be part of this football program.

Johnson finished the day with a team-high seven receptions for 83 yards and the aforementioned game-winning touchdown. After the contest, however, Johnson was the same mellow-mannered receiver he always has been.

Smiling from ear to ear, Johnson praised his offensive counterparts for overcoming adversity and finding a way to win the scrimmage. “We started out kind of slow, but I think coach (Bobo) is definitely proud of what we did at the end,” Johnson told the Collegian, as young Ram fans hounded the receiver for autographs.

After closing out spring ball with a victory for his squad, Johnson is ready for the 2017 season and feels that the work that the offense has put in this spring will translate into success this fall.

“I think it shows how good our offense is and that we are moving in the right direction,” Johnson continued. “We went from no energy to picking it up in the fourth quarter when we needed to. Obviously score (in this game) does not really matter, but we were able to come out with a victory.”

Much like his head coach, Johnson has been pleased with the passing attack this spring and is looking forward to playing his role in the aerial attack come August.

“I think we really improved with our intermediate passing,” Johnson said. Johnson went onto explain that the offense saw a lot of success this spring, both in situational drills and in each of the three scrimmages.

“There were a lot of third and tens or second and longs that we were able to pick up 10-15 yards. That went really well. The deep ball was definitely not as good today, as it has been in the past, but our intermediate game has stepped up.”

Ram fans will have their next chance to see Johnson and the rest of the Rams in action when the team kicks off the 2017 season against Oregon State.