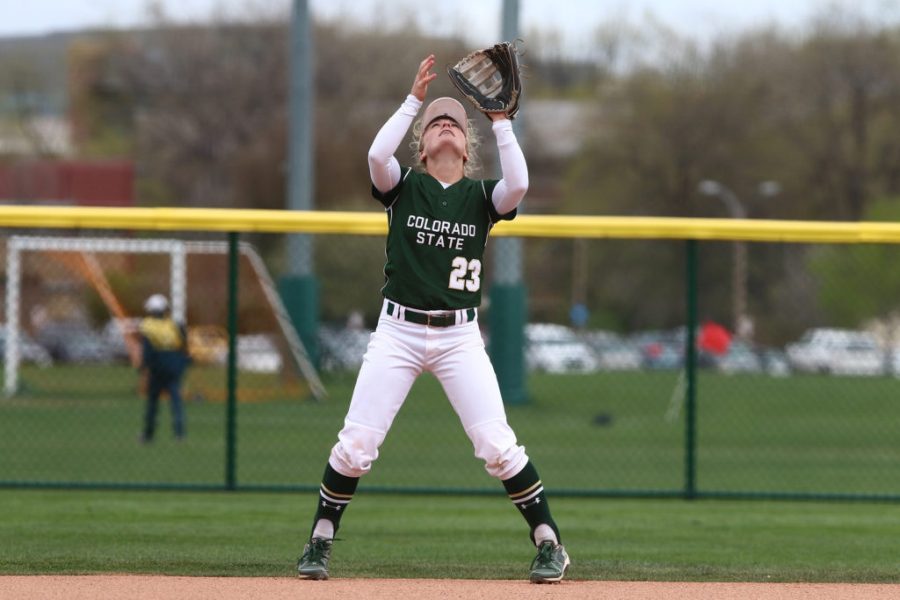 Colorado State softball’s offense went cold in game two of their series against UNLV, but it did not have to do much in game three thanks to sophomore Bridgette Hutton’s performance Sunday in the circle in a 5-0 Rams victory.

“(Bridgette) was getting ahead…if she didn’t get that first strike, it was still a quality pitch and a good miss,” head coach Jen Fisher said. “She was a little more confident with having those good misses and being right there. She had a really solid mental approach and then the defense played great behind her.”

The Rams (23-17, 8-10 MW) were led by Hutton’s complete game three-hit shutout of the Rebels (23-20, 6-9 MW) in which she only recorded one strikeout. The defense played their part behind her, having a clean sheet with no errors in the game.

“The defense was amazing and they made all the plays,” Hutton said. “They really kept me calm throughout the whole game.”

The biggest help came from Hutton’s sister, senior shortstop Haley Hutton, who was able to make a remarkable back-hand and over the shoulder catch on a soft liner to left field.

The Rams used the momentum of that play and turned it into offense, scoring the only two runs they needed in the bottom half of the fourth inning. Junior Madison Kilcrease stole second and then moved to third on a fly out by Hannah McCorkhill. Sophomore Amber Nelson then emerged from her recent slump with her second hit of the day, a RBI double to left field.

Bridgette Hutton helped herself out in the inning with a single to center field that brought Nelson home to score and put the Rams up 2-0.

The Haley’s Hutton’s hustle made a big impact again in the fifth inning when she was able to out run the Rebels’ second baseman to second on a grounder. Hutton was then able to score on an error by the Rebels’ shortstop two batters later and McCorkhill picked up two RBIs in the inning via a base-clearing single to right.

“We looked tougher with our two strike approach,” Fisher said. “All those runs, all those hits came with two strikes on us and we just put the ball in play more. We had fewer strikeouts today…I thought we were at least battling a bit better.”

However, the story of the day was Bridgette Hutton, who forced the Rebels into 10 groundouts and five fly outs.

“(The team is) getting to where they are loving defense,” Fisher said. “They are letting that be a good release from offense. We had another double play…those are becoming pretty common for us.”

Hutton’s performance came after she struggled against the Rebels on Friday when she allowed a first inning grand slam and two more runs in the second inning.

“I think, the first game, I wasn’t really myself,” Hutton said. “I did a lot of visualizations and worked my pitches in warmup and it was definitely a better turnout.”

The win came after the Rams dropped the first two games of the series to give the Rebels—who came in as the last place team in the Mountain West—their first conference series win of the year.

The victory on Sunday pulled the Rams out of last place in conference with only two Mountain West series left against Nevada and Fresno State. They are not mathematically eliminated from title contention, but the gap between them and the top only grew this weekend from the series loss.

The Rams will look to jumpstart the climb to first next weekend when they travel to take on the Nevada Wolfpack, who are currently in fourth place. Game one will get underway Friday at 5 p.m. MT.