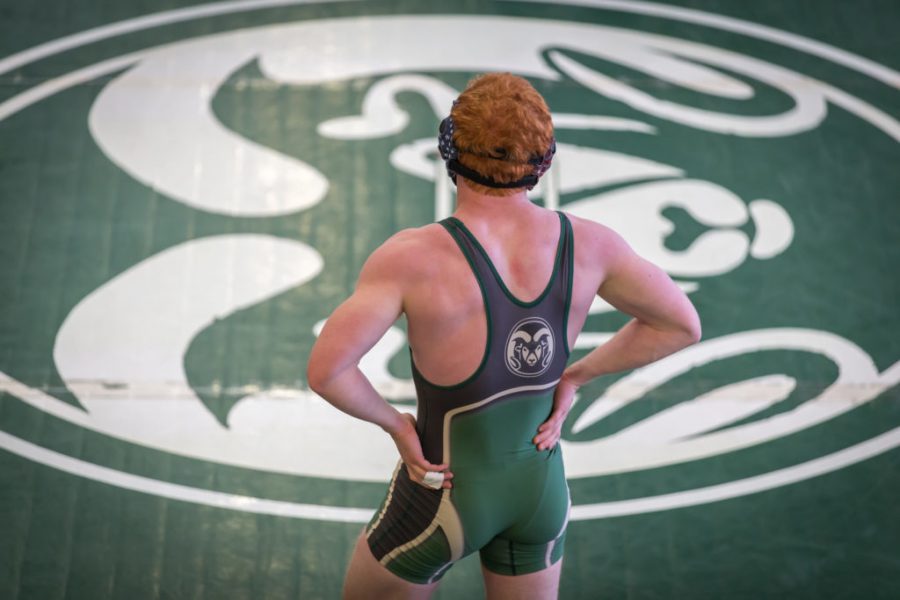 At one point, Brungardt could not even make it through wrestling tryouts. However, as his final season concluded, he was the club president with three National Tournament appearances under his belt.

The Aurora, Colorado native began wrestling at Hinkley High School and never found the same amount of success he was able to exhibit as a Ram.

“I was not good in high school to say the least,” Brungardt said. “I wrestled every year except my freshman year, but was never able to come close to qualifying for state in Colorado.”

The future electrical engineer major was deciding between a number of colleges as a senior in high school, including Arizona and Albany. Brungardt landed on CSU because it felt like home. The decision had nothing to do with wrestling. In fact, Brungardt was not even sure he was going to pursue wrestling in college.

“I didn’t even know we had a team at first,” Brungardt said. “The other schools I was looking at just didn’t feel right and I decided CSU would be a great fit for me.”

Nevertheless, as a freshman, Brungardt decided to give wrestling a shot. But, it did not work out.

“I came on the team to try out but it just didn’t feel right at the time,” Brungardt said. “I was there for a week and decided it wasn’t for me.”

Though Brungardt was never too invested in wrestling during his freshman year from the start, an unrelated rib injury that occurred simultaneously to his hesitant decision to try out for the team put the nail in his freshman season coffin.

Even though Brungardt was a highly occupied electrical engineering student, the love for the sport began to creep back into his mind by his sophomore year. With nothing to lose, Brungardt gave it another shot. Only this time, he stuck with it.

“I was looking for a sense of comradery,” Brungardt said. “I missed having the athletic edge in my life. I came out for tryouts and decided to stick with it.”

The eventual team leader and club president’s transition to success on the mat was not the smoothest.

Brungardt was frequently outmatched during his first couple of months competing for CSU. In fact, Brungardt did not win a match for his first three months as a sophomore.

“I remember getting my butt kicked the whole year,” Brungardt said. “But, I kept coming back and working to get better.”

During each and every season as a CSU wrestler, Brungardt was able to come through in crunch time and perform in the conference tournament. Even as a struggling sophomore, this was true. Come Great Plains Conference Tournament time, Brungardt fully put it together for the first time as a Ram.

“As soon as conference hits I always turn something on,” Brungardt said. “Like this year I knocked off the number seven kid in the nation.”

With a 4-15 record in the 125-lb weight class entering the GPC Tournament, Brungardt stepped up and won three matches. This earned the sophomore third place and an opportunity to wrestle at Nationals as a sophomore.

“I ended up pinning the first kid I faced at Nationals sophomore year,” Brungardt said. “That was one of my best memories of being on this team. I was in total disbelief after a season where I just wanted to win a single match.”

Once Brungardt was able to flash his talent and get a glimpse of Nationals, he wanted more. This is where Brungardt began to make the transition towards club wrestling dominance for his final two collegiate seasons. Brungardt credits assistant coach Barry Bernstein for pushing him to be a better, more confident wrestler.

“At the time, I was a little tough on him because I needed to be,” Bernstein said. “In the long run, I think this helped Mike (Brungardt) a lot.”

Bernstein’s tough-love approach combined with Brungardt’s commitment and hunger to succeed resulted in one of the best wrestlers in the GPC.

As a junior, Brungardt’s record immensely improved to 10-9 at the conclusion of the regular season. This time, Brungardt cruised to a second place finish in conference. Brungardt also was only two wins away from earning All-American honors at Nationals.

“His attendance was fantastic, he worked hard, he listened to coaches and tried to improve techniques,” head coach Kendall DeJonge said. “His hard work showed and we saw Mike (Brungardt) mold himself into a great wrestler.”

Brungardt wrestled in the 125-lb class for the entirety of his junior season, just as he did during the previous season. Before his senior season, Brungardt decided to move up not one, but two weight classes.

While moving up a single weight class is a common occurrence in club wrestling, moving up two, from 125 to 141 is more rare of a sight.

“After my last match junior year I gained eight pounds in four hours from just rehydrating and eating everything in front of me,” Brungardt said. “I said to myself that I didn’t want to be this skinny ever again and so I started bulking up.”

However, before Brungardt could test the waters of the heavier weight class, his wrestling career and life was put on hold by a major health scare. While working an internship in Indiana during the summer before his senior year, Brungardt began to experience a frequent amount of abnormal bowel movements.

In September, only a few months later, Brungardt was diagnosed with Bright Red Blood Per Rectum Disorder, or BRBPR. Though sometimes BRBPR is often caused by minor issues such as a hemorrhoid, it can also be caused by colon cancer.

“All of a sudden I went from looking forward to graduation and having a great job out of college to maybe being dead at the end of the year,” Brungardt said.

Because of complications with doctors and insurance, Brungardt had to wait until January 15th, the week before wrestling season, to get a colonoscopy. Brungardt stayed at coach Bernstein’s house before the procedure, and had his good friend and mentor drive him to and from the hospital.

“It certainly wasn’t a big deal to my wife or I,” Bernstein said. “We have a pretty special bond and we do get close to our wrestlers. We wanted to be there for Mike (Brungardt) when he needed it.”

With his fingers crossed and nothing on his mind except his health, the colonoscopy yielded positive results. Brungardt dodged a major bullet.

“They found a polyp in my colon the size of a Leggo that was located on a major blood vessel,” Brungardt said. “Polyps that big are considered tumors. In order for them to remove it they had to stitch that blood vessel up. Thankfully, when they ran a biopsy to check for cancer, it was benign.”

Brungardt had to refrain from engaging in any athletic activity for about a week. However, Brungardt actually only missed four practices and was still able to compete in every meet of the season.

“If you look at your priorities, it’s health, family, school, wrestling,” DeJonge said. “Health is way more important than wrestling in the scheme of things. He got it checked out and taken care of. He had to take some time off and his conditioning fell behind a little bit but he caught up pretty fast.”

Despite the health distraction right as his final season was approaching, Brungardt had no problem winning matches in the 141-lb weight class a senior. Brungardt went 12-8 this season, his best season on paper, and qualified for Nationals for a third-consecutive season.

Though he never quite could earn All-American honors, Brungardt’s coaches believe he did everything in his power to do so.

“He controlled what he could control,” Bernstein said. “He controlled his strength. He controlled his weight. Win or lose, when Mike (Brungardt) would come out of a match he always gave what he had to give. I don’t think he had anything left to give ever. I’m more proud of that more then I am about him potentially making All-American. No matter what the circumstance was Mike always got better.”

Though his collegiate career has come to an end, Brungardt is considering staying involved in wrestling on the coaching side of things.

“I’ve been given the opportunity to be the head coach for Loveland Classical Schools’ K-8 program,” Brungardt said. “I’ve been a volunteer assistant coach for them for the last two years. I love teaching little kids how to wrestle.”

Overall, seeing Brungardt deal with adversity and mature as an individual was a pleasure for those involved with Rams club wrestling over the past three seasons.

“The first time I met him (Brungardt) he was a young man coming in from a high school program in which he never individually qualified for state,” Bernstein said. “He got to the point where in all three of his competitive years at CSU he not only qualified for Nationals, but won matches at Nationals. He matured as both a person and a wrestler to say the least.”