Rockhold is on the move for a NCAA championship 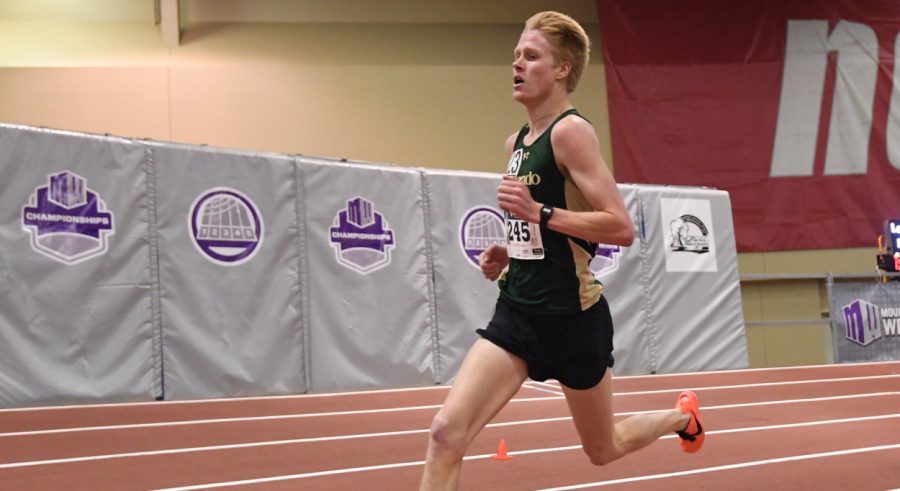 The last couple of months have been a wild ride for Cole Rockhold.

The Colorado State cross-country distance athlete is in the midst of a historic season that has seen its fair share of broken barriers and broken records.

In early February, Rockhold ran the sixth-best mile time in the country this season and qualified for the NCAA Indoor Track and Field Nationals in College Station, Texas this weekend.

Since then, all Rockhold has done is punched his ticket to the sub-four minute mile club, claimed an individual conference title, broken a conference record and qualified for a second event at Nationals.

This indoor season’s accomplishments may read like a grocery list, but there are still a few items left to add before it is all said and done.

It is not like Rockhold was slow before this season.

He was a highly targeted recruit coming out of high school in Independence, Missouri, and the redshirt sophomore showed promise in his first two years on the track for the Rams.

Take a meet in April last season at the Mount SAC relays in California, where in the first 5,000 meters of his career, Rockhold finished his heat with the third-best time in school history. To make that race even better, Rockhold ran the last third of the event with only one shoe on.

But that was just a highlight. His early seasons at CSU were marked by injuries.

“That’s kind of been Cole’s Achilles’ heel,” CSU distance coach Art Siemers said. “Staying healthy has been kind of the hardest part for him, but now he is learning his body and he is learning what he can do. Now that he can stay healthy, that consistency is starting to show.”

Rockhold stresses that his success simply comes from that consistency. It may be a boring answer, but staying off of the training table and stringing together months of hard mileage without injury is where the sub-four speed comes from.

That consistency carried him to the University of Colorado’s new indoor practice facility on Feb. 3 for the CU Open.

The Rams ran on the track three weeks earlier, and Siemers and assistant coach Scott Dahlberg knew that with the right conditions, the mile at the CU Open could be one with national qualifying implications.

Dahlberg acted as a “rabbit” for the first 800 meters of the race, setting the pace, while Rockhold followed three of CU’s strongest athletes into the finish line in fourth place. Four out of the six best times in the country in the mile this season come from that race alone. After altitude conversions, Rockhold’s time of 3:57.19, (sixth in the country) was more than enough to guarantee a spot at Nationals.

Going into that race, qualifying for Nationals was the goal, so Rockhold may of had that, but he was not satisfied.

On national leaderboards, his time reads three seconds under the almost mystical barrier of four minutes in the mile. But there is also an asterisk next to it — the altitude adjustment. While science tries to make up for changes in altitude across the country, the science is not exact, leaving a certain stigma around adjusted times.

It did not take long for Rockhold to do something about that asterisk. Only one week later, at the Husky Classic in Seattle, Rockhold ran a 3:59.55 in the mile.

He became only the second athlete in CSU history, the other being CSU national champion miler Bryan Berryhill, to run under four minutes in the mile, and Rockhold was not even supposed to run the mile at that meet.

“I wanted him to run the 3K, but I knew how important (the mile) was and I knew he was in good shape,” Siemers said. “When you are in really good shape, you have to have a little bit of luck because you have to be in the right race.”

To top if off, Rockhold was hit with tonsillitis that weekend. Siemers labelled Rockhold as “holding on for dear life,” in that race because of impaired breathing.

Sick or not, Rockhold broke the barrier, and he did it at sea level. There would be no asterisk this time.

Special might be an understatement in the running community, or even society as a whole, when it comes to going sub-four in the mile. It is a round number that almost everyone can associate with excellence in the discipline, whether one is at the Olympic Games or gym class in elementary school.

“Honestly, no kid grows up putting in all the work in middle school and high school thinking about winning a conference title, but most runners do dream when they are putting that mileage in when they are younger, about breaking a four-minute mile,” Siemers said. “Every runner thinks about breaking the four-minute mile. It is still a magical barrier, and its kind the niche everybody wants to get on their belt.”

He may have hit the sub-four mile at sea level, but his adjusted time set in Boulder in February had Rockhold on a direct line to the mile at the NCAA Indoor Nationals.

Then, the Mountain West Indoor Championships came around, and suddenly things were not so cut-and-dry for Rockhold.

Though he has his mile times, the coaches believe Rockhold’s best event, both potentially and even currently, is the 3,000 meter.

Siemers says Rockhold gets faster the longer he goes, and with that in mind, Rockhold scratched the mile at the MW championships. Siemers wanted a competitive opportunity to test his theory about Rockhold in the 3,000 meter.

The decision turned out pretty well for Rockhold and the Rams, as Rockhold took first in the 3K (around 1.8 miles) with an adjusted time of 7:54.48. Rockhold was followed by teammates Jefferson Abbey, Grant Fischer and Jerrell Mock, as the Rams took the top-four spots in the event — an outcome that proved crucial to the team’s overall conference title.

Rockhold and his teammates also all came in under the previous Mountain West record in the discipline, leaving Rockhold as the conference record holder in the event.

After that race, Rockhold sat in the 17th spot in the event in the country, just one spot away in qualifying for Nationals in his second event.

Again, the coaches and Rockhold had a choice to make. If the opportunity presented itself, Siemers wanted to run Rockhold in the 3K at Nationals because he believes that is Rockhold’s best race, and that it is the toughest race to run at altitude — something Rockhold is plenty used to.

Rockhold made the 3K when a higher-ranked athlete in the event scratched out. Now, Rockhold is running in the National championship of the 3,000 meter Saturday evening.

“I just look at it like a blessing,” Rockhold said. “All year, I have been thinking about the mile and had my eyes set on the mile at Nationals. My skill set is better suited for the 3K because I have the strength of running at altitude everyday. I have that endurance. I have been doing mile and 3K workouts all year.”

When Rockhold won the conference title, he did so while lapping athletes the last 600 or so meters. Siemers thinks Rockhold has a lot more in him than that time set at conference. The coach is eager to see what a fresh Rockhold can do in one championship race against the best distance runners in the country.

“I was stoked to qualify for two events and pick my best one,” Rockhold said. “I am really excited. I think it will be a huge weekend for the team. We have a lot of guys going. I’m going to go down there with team in mind and try and score as many points as possible.”

Rockhold gets a shot this weekend to put another mark on what has been a historic season, both personally and for the CSU men’s track team which has the potential to score the most points at Indoor National Championships in program history.

The opportunities are here now, but if the last few months are any indication, Rockhold is only getting started.