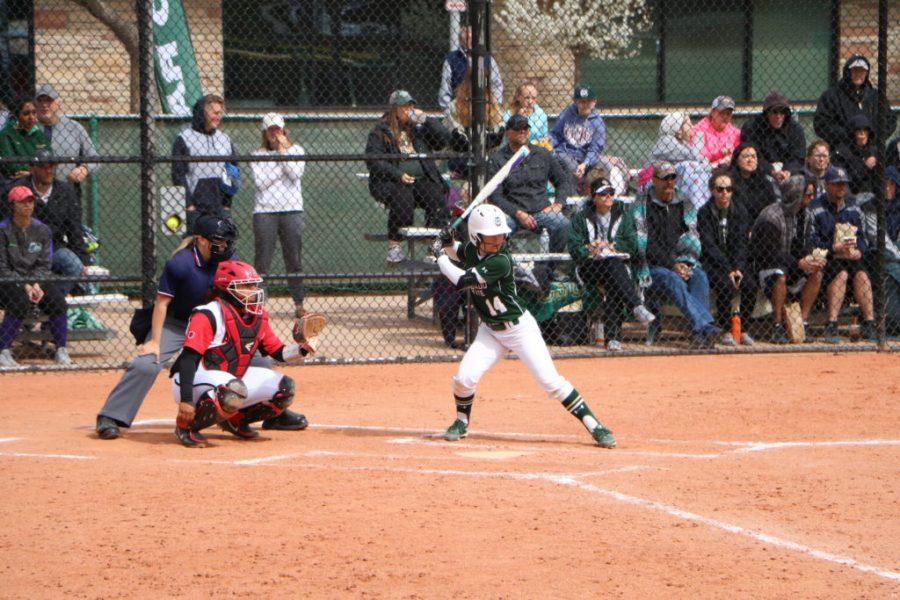 Colorado State won their first conference series of 2017 after an 11-5 rubber match victory over San Diego State on Sunday.

For the second straight game the offense delivered and junior Kaylynn Pierce dominated in the circle for the Rams (15-10, 3-3 MW). The offense got a boost from the bottom of the order in this game, however, as freshman Corina Gamboa went 3-for-4 with four RBI.

“(Gamboa) was riding pretty high in the fall, really playing well…then she slumped a little bit,” head coach Jen Fisher said on Gamboa’s comeback performance. “Very happy for her because that is what she is capable of.”

CSU got on the board quick Sunday, scoring five runs in the first inning. After RBI’s from sophomores Lauren Buchanan and Amber Nelson, it was Gamboa’s turn. Nelson and senior Taryn Arcarese were on base when Gamboa hit a single to center field to put the Rams up 4-0. CSU added one more run in the inning to go up 5-0.

Junior Larisa Petakoff started the game pitching and had an unblemished first inning, but walked the first batter and gave up three straight singles in the second that allowed one run and loaded the bases. Pierce came in as relief and gave up another single to score a run, but the Aztecs’ rally would get cut short by a double play made by junior first baseman Hannah McCorkhill. McCorkhill caught a line drive while standing on first base that resulted in the runner being out as she took off on the hit.

Those two outs were very important as it stopped the Aztecs’ comeback attempt and set the Rams up for another big third inning. Sophomore Bridgette Hutton put down a sacrifice bunt that loaded the bases after the Aztecs’ shortstop dropped the throw to third, trying to get the lead runner out.

Once again Gamboa came through in the clutch with a two RBI double that one-hopped to the fence. Haley Hutton brought in her sister two batters later and McCorkhill brought in Hutton on a single for her second RBI of the game.

After three innings the Rams were up 10-2 with Pierce pitching to contact. She gave up a couple of runs on back to back doubles in the fourth and an inside the park home run on a bad throw to first, but that was it for the Aztecs. Pierce finished with six innings pitched, two earned runs on eight hits, one walk and three strikeouts.

“(Pierce) was just so feisty and I love that about her,” Fisher said. “She is a good athlete, she is not just a pitcher. She plays defense and she swings the bat pretty well too.”

The Rams outhit the Aztecs 16-12, a season high for the team in hits. Nelson went 2-for-4 to push her reached base streak to all 25 games played.

With a win over a highly regarded team like SDSU (18-13, 2-4 MW), it is easy to overlook future opponents and Fisher wants to keep her team focused on the rest of the challenges in front of them.

“I am hoping that we continue to be a little bit under the radar honestly, because I think everybody is really good in this conference,” Fisher said. “There’s plenty of other teams we can’t overlook.”

The win ties CSU with New Mexico for fourth place in the Mountain West, one and a half games behind Fresno State, who is in first with a 4-1 conference record. New Mexico is 1-1 in conference play and they are the next opponent for the Rams. CSU will head to Albuquerque this weekend to take on the Lobos March 31- April 2. Game one is scheduled for 5 p.m. MT on Friday.