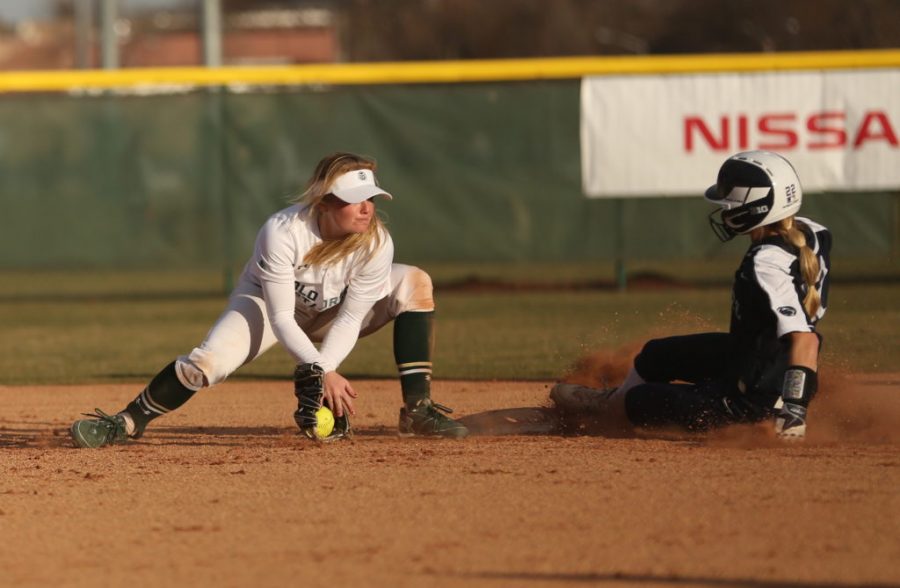 Maine (1-4) and Wisconsin (15-2) will be in Fort Collins for the second Colorado State Classic II this weekend. Maine is the defending American East champions and Wisconsin is currently ranked No. 25 in the USA Softball poll and is receiving votes in the coach’s poll.

Sophomore catcher Amber Nelson will look to continue her dominance at the plate. She has hit five home runs on the season and leads the Rams (11-4) in batting average (.462), slugging percentage (.897), on base percentage (.593) and RBI (18). Nelson is coming off a game against Northern Colorado in which she went 3-for-4 with a home run, two singles and three RBI.

“She is just a little bit more consistent this year as far as her approach to the plate,” head coach Jen Fisher said. “She is still very young but she is doing a great job.”

It helps the RBI numbers to have senior shortstop Haley Hutton batting in front of Nelson. Hutton has started all four years at CSU and currently has the best career batting average ever for a Ram.

The preseason All-American honorable mention is continuing her collegiate success this season with a .348 batting average and .500 on base percentage. She has also been an anchor for the defense and pitchers to rely on.

“When you have a shortstop like Haley Hutton I would just throw it up there and not care,” Fisher said after the Rams perfect 5-0 record last week in the first Colorado State Classic.

Nelson and Hutton will look to continue their success at the plate against Maine’s Erin Bogdonavich, the American East Pitcher of the Year last season. Bogdanovich led her team to the conference title with a 3.05 ERA and a 10-5 record. She struck out 74 batters compared to only 32 walks in almost 120 innings of work. This season, Bogdanovich holds a 7.24 ERA in two games started and four total appearances.

The numbers would suggest the season has been a struggle for the Black Bears as they have only one win and have scored 13 runs in five games.

“I think our sport is one that lends itself to ‘you’ve seen this type of (pitcher) before’ so I think the whole preparation piece is more just drawing similarities,” Fisher said.

The Rams will be looking for similarities when they play Wisconsin (15-2) on Saturday and Sunday, hoping to upset a top ranked opponent. The Badgers have dominated early on in their season with a positive 68 run differential.

Utility senior Chloe Miller has been at the forefront of the Badgers offense with a .473 batting average which easily leads the team. Miller also leads in runs with 16 and brought home 51 runs last season which is tied for the most ever in a season for Wisconsin.

Wisconsin also has two other batters hitting above the .350 mark, one of which being the two-time First-Team All-Big Ten selection Kelsey Jenkins. She led her team in eight different offensive categories last season and led the conference in walks. She reached base safely in 38 consecutive games as well.

“(The pitchers) have to continue change speeds and control timing,” Fisher said. “They are all more effective when they do that and again they have to play defense.”

Freshman Kaitlyn Menz and senior Kirsten Stevens have been effective from the pitching circle, boasting ERA’s of 0.59 for and 1.10, respectively. Stevens was a transfer last year for Wisconsin after winning the Southern Conference Pitcher of the Year award at Mercer in 2015.

“We are in this mode where we are beating teams that we as coaches expect to beat so I think we have been trying to convince this team that if they do things right…we should beat some of those (high ranked teams),” Fisher said. “It’s really us against the game. It’s are you going to pitch well, hit spots, play defense, run the bases well and do your job at the plate?”

The Rams will play Maine at 3 p.m. on Friday and follow it up with a double header on Saturday with Wisconsin at 12:30 p.m. and Maine at 3 p.m. The weekend will wrap up Sunday at 11:30 a.m. against Wisconsin.