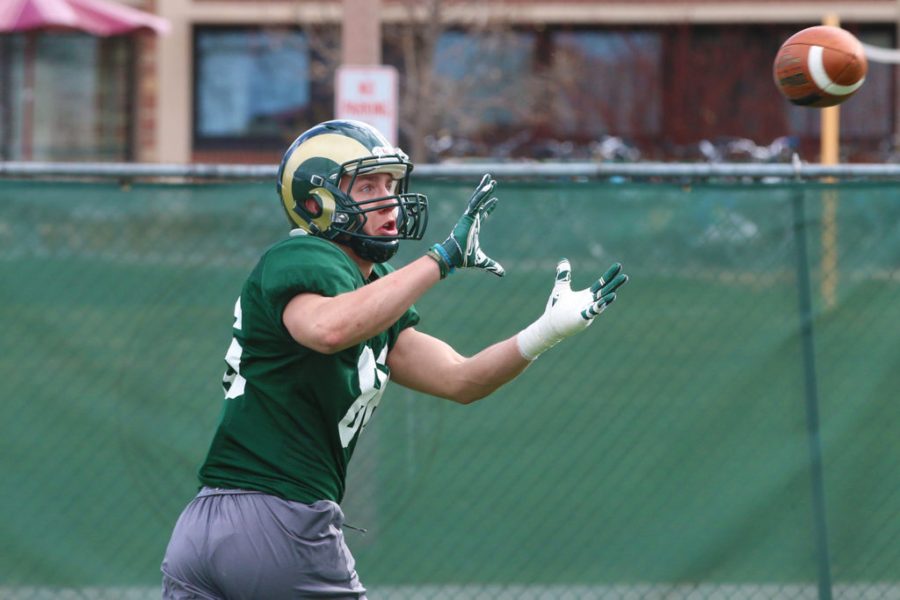 No position group on the field for the Colorado State Rams this spring is more inexperienced or younger than the tight ends.

The group includes a senior in Dalton Fackrell, who saw limited action in 13 games last season, his first at CSU. A junior in John Freismuth who has been at the school for four years, but is in his first few days of practice at the position. There is a sophomore in Isiah Pannunzio, who spent 2016 on the scout team. And a mid-year enrollee in Griffin Hammer, who had to ask the coaches for a Friday off later during spring practice so he could attend his high school prom in Illinois.

Fackrell is the only player with any on-field experience in the unit. Last season, he caught only seven passes for 66 yards, but showed potential as a playmaker in the passing game. Where he struggled, and he is quick to note it, is being an every-down tight end who could handle himself in the run game.

“I want to be the most complete tight end I can be and that’s the challenge we take everyday as a group,” Fackrell said. “To be the best tight end group, you have to not only be able to catch the ball, but get after someone as well.”

In the pattern, the potential for the tight ends is there. Fackrell, Pannunzio, Hammer and Freismuth all have the ability, and the background as pass-catchers. But the undersized group still has a ways to go when it comes to the other side of tight end play.

“As a group, I think we can be one of the most explosive units on this offense if you look at everybody here — everyone has the receiving threat,” Fackrell said. “It’s developing the toughness, it’s developing the grit to get after someone — that is really what we are looking forward to this spring and looking to develop this spring.”

The Rams had no such problem with toughness at the position last season with tight ends Danny Nwosu and Nolan Peralta.

Nwosu (14 catches for 155 yards) and Peralta (11 catches for 91 yards), had moments as receivers, but the two players, especially Peralta, stood out for the physicality they brought to the field.

“Nolan was known for getting after people and laying the wood to people,” Fackrell said. “Having somebody like that before me, it really showed me what it takes to play tight end after always being kind of the receiver type.”

Fackrell said that the first thing on tight end coach Joe Cox’s board for the unit this spring was developing toughness. Yes, the coaches and players like what they have in the receiving department, but CSU needs tight ends who are ready to play on the line and stay on the field on running plays.

“In the run game, it’s tough when you are getting guys who have never put their hand in the ground (and) having to block anybody,” Cox said. “That’s a constant thing that we are harping on — toughness and being able to physically sustain playing in that kind of system.”

For guys like Fackrell, who spent much of his time in a primary receiver role in junior college, it was invaluable to spend a year under Peralta.

Cox says that Peralta set the standard, and put such a premium on physicality, he frequently had opposing players and teammates wanting to mix it up with him after the whistle. That is the kind of experience players like Fackrell and Pannunzio got in the tight end room last season.

“For them to see that all last year, that was huge because that’s what I want,” Cox said. “I told them today, ‘we haven’t had one guy get mad enough to want to try and get into a tussle with you after the play,’ and that’s a problem to me, because we are harping that we want to be the hardest working group, we want to be the toughest group and we want to finish harder than every other position on the field.”

While he did not go so far to say that he was encouraging his tight ends to get into any fights, Cox still wants his guys to play with the violence and physicality it takes to tick off opposing players.

And as the now elder statesman in the group, Fackrell is hoping he can pass on to the younger guys what he learned from Peralta last season.

“Hopefully they can follow my lead and hopefully I can instill that in them,” Fackrell said. “We watch film on (Peralta) and learn from what they did last year.”

Collegian sports reporter Eric Wolf can be reached by email at sports@collegian.com and on twitter at Eric_wolf5.