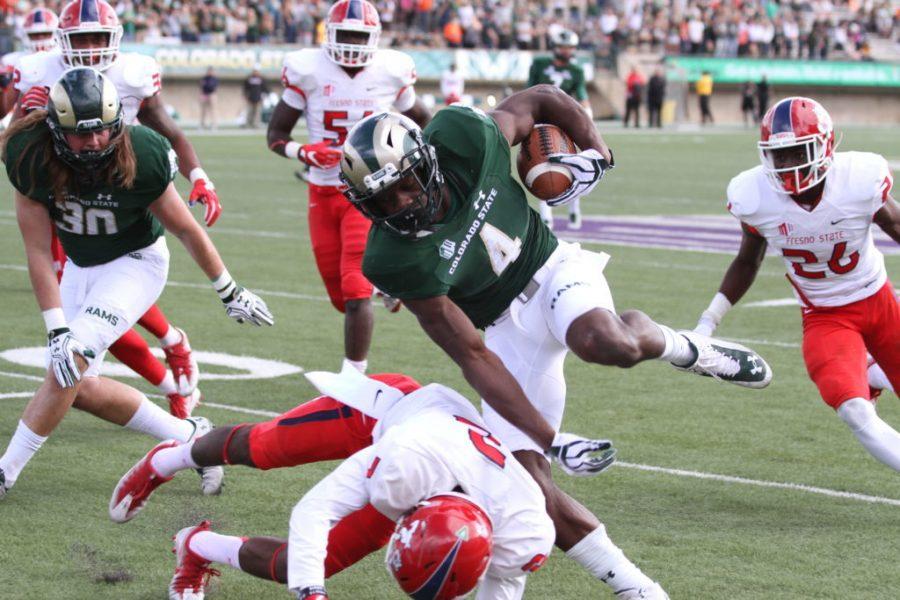 After the first day of spring practice for the Colorado State Rams, a buzz hung in the air.

There were hints of it during Monday’s spring football opening press conference, when coach Mike Bobo and offensive coordinator Will Friend talked about CSU’s offensive development in the third spring under the staff.

“It is year three – really three-fourths of your team – all they have known is us,” Friend said. “I guess a good way of putting it is there is no question we are ahead right now than we have been every spring since we got here.”

Honorable mention all-conference quarterback Nick Stevens is back leading an offense that averaged 520.6 yards per game over the last five games of the regular season and finished as the second-ranked passing offense in the Mountain West at 244.5 yards a game.

What Stevens and the coaching staff hopes — and expects to have — is a wealth of talent on the outside, especially with wide receivers Michael Gallup and Olabisi Johnson.

“It’s definitely exciting,” Stevens said about the potential of his offensive players. “I think we definitely have those guys. Obviously the returners like Detrich (Clark), Mike (Gallup) and Bisi (Johnson) are displaying their ability right now, but we have some other guys who are the newer guys who are also stepping it up.”

Gallup was the star on the outside last year, finishing the year with 1,272 receiving yards and 14 touchdowns, but throughout the season, Bobo said that he did not think Gallup hit his full potential.

With a full offseason under his belt, there is a sense that Gallup is getting closer to hitting that mark.

“(Gallup) was wanting to get extra work in just about everyday in the offseason before we started spring ball and obviously we did not have that time last year,” Stevens said. “I think he definitely has some ways to go, but he is reaching that potential and getting closer and closer to that everyday and showing that on the field.”

“Last year was a confidence booster, and I mean I just kind of rolled with it,” Gallup said. “This year, I have to be able to do the same things, but better. If I just do my part, hopefully it comes out good for everybody.”

Gallup’s development can only boost a wide receiving corp that returns Johnson, who set a school record with 265 receiving yards in CSU’s Potato Bowl loss to Idaho, along with senior Detrich Clark and sophomore Anthony Hawkins, who both figure to fit into CSU’s passing offense much more this season.

“There’s no reason we should not be one of the best receiving groups in the Nation,” Johnson said. “I think we have a lot of talent at the position like Detrich Clark and Anthony Hawkins; they are getting better at their craft. Mike had a great season last year and he is just building on that. We look good.”

Johnson, who is riding the confidence off his bowl game performance into this season, is not shy in talking about the playmaking potential of this season’s receivers.

But with what some of the players have shown last year, and with a year of playing together under their belts, there is good reason for the players to think that the 2017 season should bring even more explosiveness.

If there was any reason to think that the talent on the outside would lead to any selfishness when it came to who was making the plays, Johnson and Gallup were quick to dispel that notion.

“If one of my other teammates is scoring just like I want to be, I love it just the same as me scoring,” Gallup said. “Just to see how those guys are coming up and just playing on the same level as everybody else and being involved…I just love that.”

It is only spring, and it will take months to actually see how all of the offensive potential will play out, but for now, expectations are high.

Even after just one day of spring practice, it looks like things are heading in the right direction for the more experienced offense.

“Coach Friend was talking about coming off of today, that we are going to look really good in the perimeter of our offense,” Johnson said. “We saw it in practice today. There was a lot of good energy coming from everybody.”

Collegian sports reporter Eric Wolf can be reached by email at sports@collegian.com and on twitter @Eric_Wolf5.