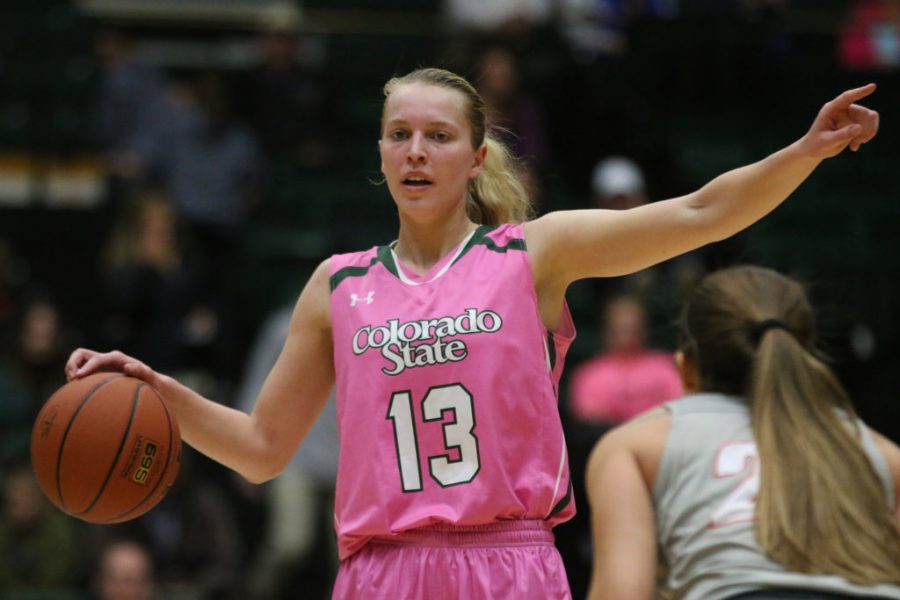 CSU Senior Ellen Nystrom calls out a play as she brings the ball down the court during the second quarter against the UNM Lobos. (Elliott Jerge | Collegian)

Colorado State women’s basketball player Ellen Nystrom was named Mountain West Player of the Year, as voted on by the coaches across the conference, for the 2016-17 season, the conference announced Monday.

In doing so, Nystrom became the first player to win the award in consecutive seasons since 2005-06. Nystrom was also named to the Mountain West All-Defensive team for a fourth straight season. Joining her as an All-Mountain West selection is teammate Elin Gustavsson. This is her first time being selected to an All-Mountain West team.

The Mountain West preseason poll’s selections for the Rams came to fruition, as the poll successfully picked Colorado State and Nystrom to repeat as conference champions and Player of the Year. Over the year, Nystrom averaged 15.1 points, 7.8 rebounds, 5.2 assists and 2.0 steals per game in 34.6 minutes of action, all of which were tops on the team. She ranked top 10 in the conference in nine different categories, more than any other player.

Nystrom was named Mountain West Player of the Week on three separate occasions this season, the most recent of which came two weeks ago when the Rams clinched their fourth consecutive regular season title. In the conference-clinching game against New Mexico, Nystrom tallied 22 points, 10 rebounds and six assists to lead her team to victory.

After losing their top two scorers from last season, Nystrom was the one to pick up the slack as she increased her scoring average by five points and embraced a late-game role. She also increased her rebounding, blocked shots and steals averages this year compared to last.

In conference play, Gustavsson led the Rams in scoring at 16.4 points per game, including a stretch where she scored 20 or more points in four consecutive games. Gustavsson set a new career-high in points scored, 32, in the Rams’ victory over San Diego State on Jan. 28. Her .510 field-goal percentage was good for fourth best in the conference.

Colorado State now turns their attention to the Mountain West Tournament in Las Vegas, NV. Their first game is at 1 p.m.  Tuesday March 7.