Nystrom and Gustavsson shine in victory over Spartans 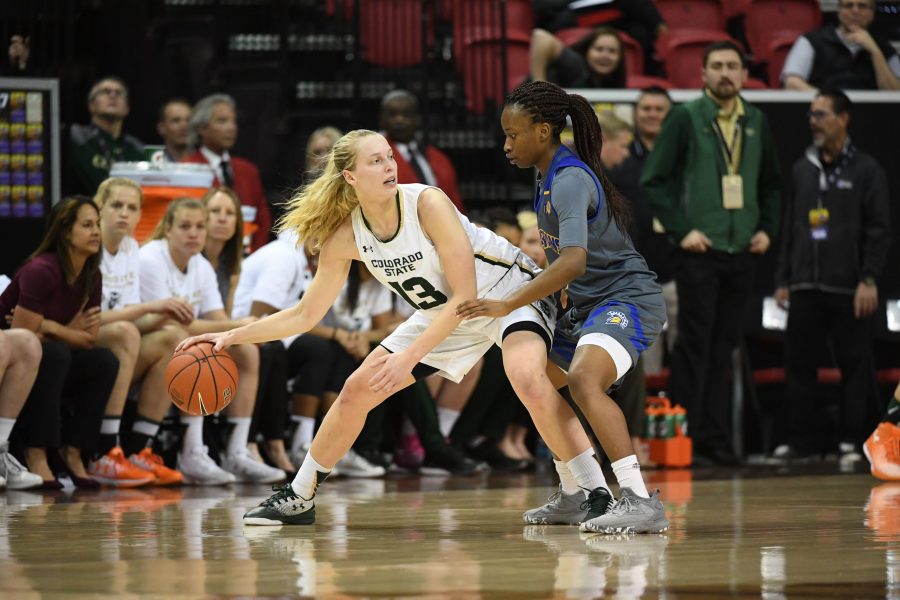 LAS VEGAS — Playing in what will be the final Mountain West Tournament of their collegiate career, seniors Elin Gustavsson and Ellen Nystrom opened the first round of postseason play with a dominating performance over the San Jose in a 65-60 Colorado State win.

With the win, CSU advanced to the semifinals of the Mountain West Women’s Basketball Championship where they will play Boise State.

Gustavsson was everywhere for the Rams early, nearly recording a double-double with 16 points, nine rebounds in the first half alone. Gustavsson would ultimately solidify her double-double one minute into the second half, securing an offensive rebound off of an Ellen Nystrom miss. On the day Gustavsson finished with 26 points, 12 rebounds and two assists in 39 minutes of action. Her 26 points set a CSU Mountain West tournament record.

“We tried to get the ball into post and I tried to take advantage — if they would play tight I tried to go by them, if they backed off I tried to shoot (the ball),” Gustavsson said after the win. “So kind of make them a little bit confused because I tried to do both. Be a threat everywhere.”

Time after time the senior forward was able to bully her way into the paint and finish with touch off the glass. Even when the play was not intended to go through Gustavsson, the ball found her. Either through an offensive rebound or a loose ball, it did not matter, Gustavsson was going to find a way to complete the play.

“I was playing a lot together with (Jasmine) Smith, kind of against each other,” Gustavsson said. “And she’s a really good rebounder and she’s strong. So I had to try to find my advantage when it came to my length and it worked some decisions.”

After a slow start through the first half in which the Mountain West Player of the Year went just 1-for-2 from the field and recorded four points, Nystrom came up big for the Rams out of the break. Similar to her Swedish counterpart, after scoring 13 second half points Nystrom finished the afternoon with a double-double (17 points, 12 rebounds).

The double-doubles posted by Nystrom and Gustavsson mark the third time this season the Swedish tandem has shared the stat line. All thee occasions came against San Jose State.

“Coach told me to be more aggressive,” Nystrom said.

Following a massive run from the Spartans to cut a double-digit Ram lead down to a single possession, Nystrom was able to bring down a pair of crucial last minute rebounds and score seven of her 13 second half points in the final four minutes.

“It’s very, very important and extremely valuable to be able to play through a couple of seniors that have really, really been tested,” head coach Ryun Williams said. “But let’s face it, San Jose State put four seniors out there as well that didn’t want to lose today. So I think that’s why you saw the game work out the way it did, very, very close.”

Colorado State will play next on Wednesday at 7:30 p.m. MST in the semifinals against Boise State.