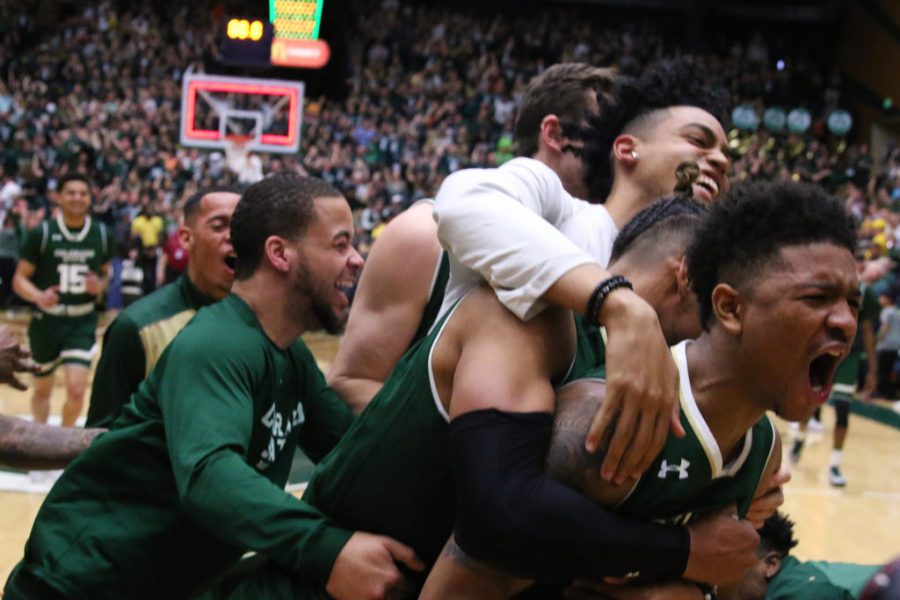 The CSU Basketball Team mobs Sophomore Prentiss Nixon after their win over the Wyoming Cowboys. Nixon made the game winning three in the final moments. The Rams defeated the Cowboys 78-76. (Elliott Jerge | Collegian)

The Colorado State men’s basketball team did not start the season the way they wanted to.

CSU lost senior guard, and eventual Mountain West Player of the Year, Gian Clavell for the first nine games of the season due to his arrest following a false imprisonment with a domestic violence enhancement in the Moby parking lot with his ex girlfriend. Then they lost three more players (Che Bob, Devocio Butler and Kimani Jackson) to academic ineligibility halfway through nonconference play and ultimately entered the Mountain West portion of the schedule with an 8-5 record. The Rams certainly did not look like a team that could compete for a Mountain West Championship.

There were glimpses of what this team could accomplish in early-season victories over New Mexico State University and the University of Colorado. Playing without Clavell, younger players like sophomore guard Prentiss Nixon and redshirt freshman forward Nico Carvacho stepped up and played impact roles for the team.

Emmanuel Omogbo elevated his game, turning into one of the Rams’ most important offensive threats, especially while the team was without Clavell.

Even in a road loss at Stanford and a home loss to Wichita State, the Rams proved to be a tough team for any program to handle. Right around the Dec. 17 matchup with Kansas State at the Pepsi Center, the team seemed to hit a brick wall.

After getting blown out by the Wildcats in Denver, CSU went on to lose four of their next five games. Three of the games were lost by less than a single possession, including an absurd 3-point buzzer-beater from Boise State forward Chandler Hutchison on New Year’s Eve.

The Rams hit another rough patch in mid-January, losing back-to-back games to New Mexico and Fresno State in what was arguably the Rams’ worst two-game stretch of the season.

Subsequently losing by 19 to the Bulldogs, CSU won 10 of its next 12 conference games with only seven scholarship players and a walk-on from the track team, Juan Sabino. During this stretch the Rams came back from 13 points to beat San Diego State twice, sweep the season series with Wyoming and get a 12 point revenge victory over New Mexico at the PIT.

By the end of the regular season only Nevada was atop CSU in the conference standings. As the No. 2 seed in the Mountain West Tournament, the Rams defeated Air Force for a second time this season and once again erased a 13 point deficit to top SDSU to reach the title game.

Despite losing to the only team from the Mountain West to qualify for the NCAA Tournament (Nevada), the MW Tournament resembled the rest of the Rams’ season: seven players buying into the system and trying to overcome adversity.

Despite finishing the season with a blowout loss in the NIT (CSU-Bakersfield, 81-63), head coach Larry Eustachy was extremely proud of how far his team had come and what they were able to accomplish.

“We did finish one game out of first, we did have the (conference) player of the year (Gian Clavell) and we did win a postseason game, which you have to look through a lot of archives to find that happen at Colorado State basketball,” Eustachy said. “We tied for the third-best season in the history of Colorado State (men’s basketball), so a lot of positives in spite of a lot of adversity. This is a team I will remember for a long, long time. “

After losing to California State University-Bakersfield in the second round of the NIT last week, the Rams finished the season with 24 victories, the third most in program history.

Following the game Eustachy explained how he admired and respected the fight his team possessed all season, even when the circumstances were not ideal.

“I will always remember this team as one of the most special teams I have ever had,” Eustachy said. “You have seen some teams in those circumstances quit and that is the last thing we are about, quitting.”