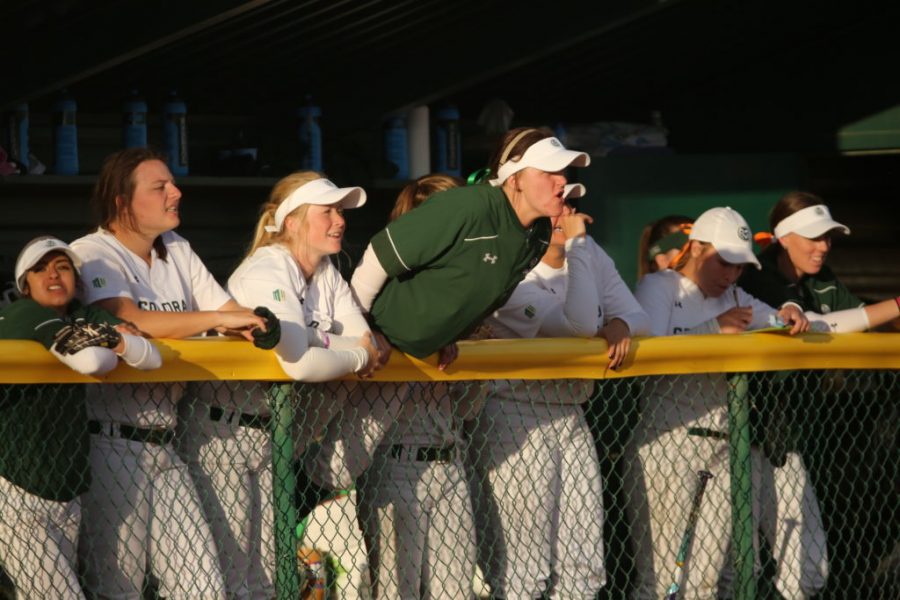 Colorado State softball struggled over the weekend in their opening Mountain West games, dropping two of three to Boise State.

Conference play opened on Friday with a double-header. A game was previously scheduled for Sunday, but the sides agreed to move the contest to avoid bad weather.

CSU (13-9, 1-2 MW) started fast as sophomore Lauren Buchanan hit a single to left field, bringing in one run and a second scoring on a passed ball.

Boise State (19-6, 2-1 MW) got a run back in the bottom of the first, however sophomore Amber Nelson took it right back as she singled to left center in the second inning to bring home senior Haley Hutton to put the Rams up 3-1.

The third inning is where the wheels fell off for CSU, ultimately leading to their 10-3 loss to the Broncos. Junior pitcher Larisa Petakoff’s first three batters of the third inning went double, RBI single and had a two-run home run to put the Broncos up 4-3.

Junior Kaylynn Pierce took over in the circle, but her first two batters hit a single and then another two-run home run to give Boise State five runs in the inning and a 6-3 lead after the bottom of the third.

Meanwhile the CSU offense went cold, failing to record a hit after the third inning and the only baserunners came from a walk and an error in the fourth inning and another walk in the seventh.

Boise State added four more runs in the sixth off of back-to-back doubles followed by the third two-run home run of the game. Pierce finished with four innings pitched, six earned runs off of six hits, three walks and two strikeouts. Petakoff got the loss as she pitched only two innings with four earned runs off of five hits, one walk and zero strikeouts.

Haley Hutton dominated the next game for the Rams as she showed why she was voted a pre-season All-American honorable mention.

At the start of the third inning, with CSU down 2-1, Hutton started a rally with a double. Buchanan brought her home on an RBI single and Nelson scored off of an error to tie the game at three.

It stayed that way until the top of the sixth when the Rams broke the game open by loading the bases with only one out. Buchanan got hit by a pitch and brought home junior Madison Kilcrease and Hutton scored on a passed ball.

Back to back singles by senior Taryn Arcarese and freshman Francesca Olivas knocked home two more runs and gave the Rams a 7-3 lead late in the game. Olivas’ RBI single was her first collegiate career hit.

“We’re showing the ability to come back in games and each time you do that you prove to yourself that you can do it,” head coach Jen Fisher said in a statement. “That helps you stay confident in games and makes you believe you’re never out of it.”

Hutton went 3-for-4 in the game with a walk and four runs scored as the Rams won 9-4.

“(Haley Hutton) just loves the game and wants to do well for her team. It was fun to watch her do so well. She’s such a great triple-threat for us and she was huge today,” Fisher said.

The third game on Saturday looked like it would be an ugly one. Boise State put up four unearned runs off of Pierce in the second inning thanks to three straight singles after the Broncos loaded the bases off of two errors by the Rams. Bridgette Hutton came in after the third single and was able to stop the bleeding with a fly out to second.

The Rams began their comeback attempt as Nelson hit her eighth home run of the season to left field and scored two and brought the deficit to 4-2 in the top of the third.

In the next inning Arcarese got her first home run of the season with a leadoff solo home run to left field. The comeback was completed when the Rams loaded the bases with no outs in the top of the fifth after a hit by pitch for Haley Hutton, a single for McCorkhill and a walk to Nelson.

Buchanan singled up the middle to bring home a run and freshman Corina Gamboa hit into a fielder’s choice to bring home one more. This provided a 5-4 lead for the Rams.

The one run advantage was short lived as the Rams gave up the lead for the second time in the series. Boise State scored four runs in the bottom of the fifth due to three errors by the Rams and two singles.

Boise State went on to win the game 8-5 with all eight runs being unearned. CSU finished the game with five errors.

“Our mentality was good. We just had lapses,” Fisher said. “We are playing loose, which I like as we begin conference play, but we need to clean up on defense. We also need to be able to execute in all areas of our game and get everyone firing on all cylinders.”

CSU will take the field next against San Diego State at home this weekend, March 24-26. Game one is set for 4 p.m. on Friday.