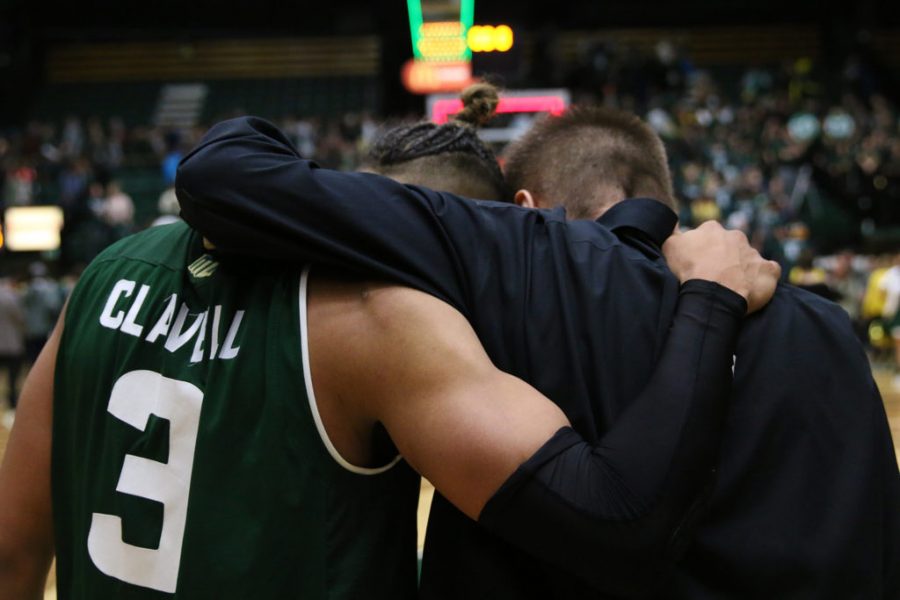 Following a 21-10 season (14-5 MW), in which the Colorado State men’s basketball team surpassed preseason predictions by a full five spots, finishing second in the conference, Gian Clavell was named the Mountain West Player of the Year and head coach Larry Eustachy was named Coach of the Year, the conference announced Sunday.

Eustachy earned his 500th career win in a nearly 30-point beatdown of Air Force Jan. 7, and his 100th win at CSU with the Rams victory over San Jose State in late January.

Following the Rams to loss to Nevada Saturday night, Eustachy said this of the season, “If you look at the overall body of work, I’ve never had anything like this with all the adversity and all the things that have hit us. I am so proud of this team and we understand how we have to play to win.”

Clavell, who missed nine games to suspension early in the season, was the league’s leading scorer throughout conference play, averaging 21.9 points per-game. He’s only the second player in program history to be named a conference Player of the Year. (Mike Mitchell, 1990).

According to the Coloradoan, Clavell earned four of a possible 11 first-place votes. Omogbo, Marshall and Oliver also received Player of the Year votes in balloting by selected media members covering each of the league’s 11 teams. For his efforts, Clavell was also named to the first team All-Mountain West.

Along with Clavell, Rams forward Emmanuel Omogbo was named first team all-conference as well, after setting a new record for double-double’s in league play (13) and leading the league in rebounds. On the season Omogbo averaged 15.7 points, while bringing down 10.9 rebounds per game.

The senior duo are the first in school history to finish first team All-Mountain West in the same season and the only Rams on the three all-conference teams. Sophomore guard Prentiss Nixon was named honorable mention.

Joining the veteran duo and rounding out the first team is San Jose State forward Brandon Clarke, along with Nevada’s Marcus Marshall and Cameron Oliver.

Utah State’s Koby McEwen was named the league’s top freshman, Nevada’s Marshall the newcomer of the year, Oliver the defensive player of the year and Wyoming’s Justin James the sixth man of the year.

The Colorado State men’s team will take the court again this Thursday in the first round of the Mountain West Tournament, facing the winner of Air Force vs Wyoming.