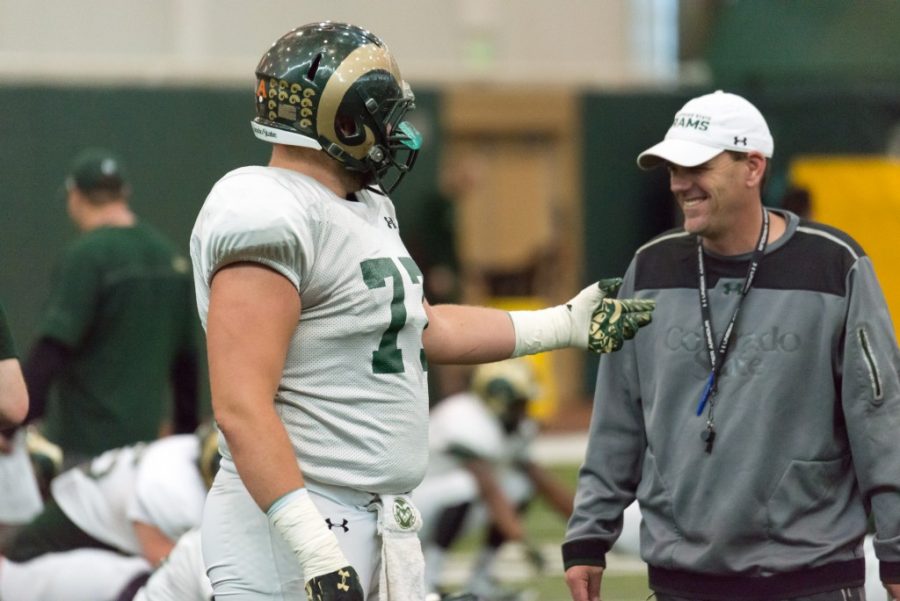 When the 2017 season opens, the Colorado State offensive line will be a mix of change and continuity.

For some, the change might be the easiest thing to focus on. Nick Callender and his 19 career starts at CSU has ended, and certainly just recognizable will be the absence of the flowing brown hair of first team All-Mountain West guard Fred Zerblis.

With the loss of Zerblis and his 39 career starts, the Rams are in the process of filling some big holes up front. During last Monday’s spring press conference, offensive coordinator and offensive line coach Will Friend said he was not yet comfortable with his group of big guys.

“We lost a guy that can finish with Fred,” Friend said. “We lost some toughness for our team with him, and somebody has got to get better with that role. Some guys that have not really played a lot are going to have to become those type of guys for us. They will get their chance right here to prove that they can play.”

That process starts this spring, and the continuity is there to make sure that process goes as smoothly as possible.

“(The spring is) just for the new guys and the older guys to just kind of gel together and start to learn how to play together,” senior Jake Bennett said. “For some of the the younger guys, it is definitely a process to learn the offense and it takes a little bit. I think the older guys and myself are just trying to bring those guys along.”

The unquestioned leader of the CSU offense, Bennett (29-career starts) stands as a pillar on the changing offensive line. With him is senior Zack Golditch (24-career starts). Together, the two lineman bring the kind of experience it takes for an inexperienced offensive line to come together quickly.

Senior Trae Moxley and junior Colby Meeks — who have combined for 10 starts while at CSU — might be upperclassmen, but they lack the on-field presence of players like Bennett and Golditch. Sophomore Jeff Taylor, who saw limited action in nine games last season, is another player the coaches are hoping can help plug the offensive line holes.

Those three players, along with Bennett and Golditch, has made up CSU’s first group of offensive lineman so far this spring.

Mid-year enrollee and juco transfer Tyler Bjorklund and redshirt junior Nicho Garcia are working with the second-team in the spring, but they could also hear their names called this season. Juco transfer Ben Knox is also a mid-year enrollee, but has seen limited practice time because of injury. Along with Knox and Bjorklund, the Rams signed five more offensive lineman in the 2017 class.

Once fall camp opens, there will be plenty of bodies competing for positions and shifting is likely, but the constant remains in Bennett and Golditch, who are tasked with bringing that group along.

“Colby and Jeff have seen their share of playing, but I think just being the guy and knowing that you are going to take every a single rep is just another level to it,” Bennett said. “I think the older guys just have to be there for advice and telling them what needs to be done and how to do. It it is our job to get them ready to play.”

Getting the offensive line ready for the 2017 season falls on leaders like Bennett and Golditch just as much as the coaching staff. After all, they are the ones leading the communication and cohesiveness so vital to the offensive front.

Golditch said that playing under people like Weston Richburg, Ty Sambrailo and even Fred Zerblis helped instill the type of leadership needed from the seniors now that it is their time to show the younger players the way on the offensive line.

“We have had guys to look up to, and we have taken those parts that made them good leaders and good players, and now it is our turn to apply those,” Golditch said. “That’s where we are kind of fitting in — is being the model. Being around the program for four years, we know the ins and outs and the do’s and don’ts. We can say, ‘Hey you should do this, or hey, this is the way to look at this,’ and stuff like that.”

Collegian sports reporter Eric Wolf can be reached by email at sports@collegian.com and on twitter @eric_wolf5.