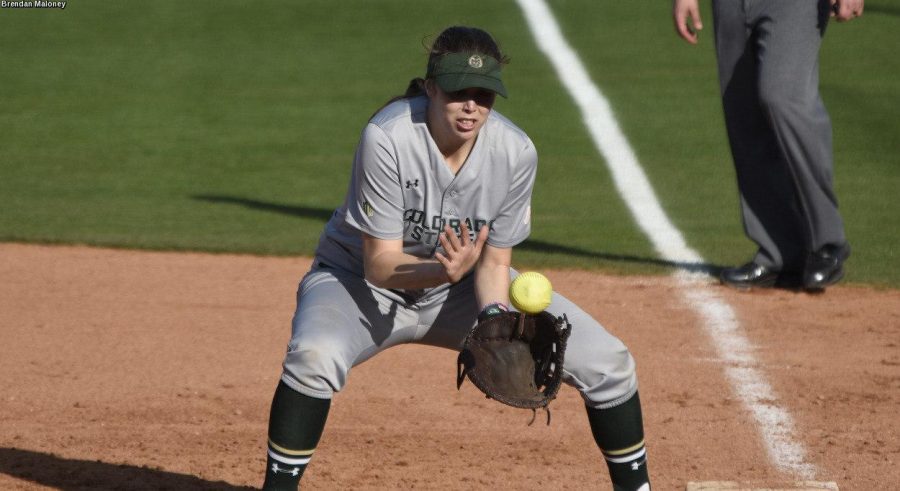 Through the rain the Rams (5-4) were able to pick up wins against Idaho State, Northern Iowa and Weber State, and only one loss to Texas State over the weekend.

Junior Larisa Petakoff continued her early success Friday with her second complete game of the season against Idaho State in the Rams’ first game of the weekend. She allowed only five hits and two earned runs over her seven innings of work in the Rams 5-2 victory, bringing her season ERA to 1.53 with only four earned runs. Petakoff’s first complete game of the season came against Maryland on Feb. 11, a team that took down No. 1 University of Florida on Saturday.

“She’s spotting the ball up and getting ahead in the count and I think that has been really helpful for her,” head coach Jen Fisher said.

For the offense, the duo of junior Hannah McCorkhill and sophomore Lauren Buchanan went to work at the plate again. They hit consecutive singles with the bases loaded in the third inning to bring home a run each and then freshman Corina Gamboa hit a sacrifice fly later in the inning to put the Rams up 3-0.

Idaho State would answer the Rams with two runs of their own in the fourth inning to pull within one. However, sophomore Amber Nelson continued to find a way on base with her seventh inning double that brought home two runs and gave the Rams a 5-2 lead where the game would finish.

In the second game of the day CSU would get another strong pitching performance, this time from sophomore Bridgette Hutton. She held Northern Iowa to two runs over a complete game outing with six hits allowed and two strikeouts.

The highlight of the first inning was McCorkhill who was able to reach first after a 16-pitch battle at the plate that resulted in a walk. She would score later in the inning off a sacrifice fly by Gamboa to put the Rams up 3-0 after the bottom of the first.

The patience shown by McCorkhill was the theme of the game for the Rams as they were out-hit by the Panthers six to five, but CSU drew eight walks while Hutton only gave up two. Senior Taryn Arcarese was the Rams’ leader in patience as she drew three walks in the game.

“When you swing at good pitches you can really help yourself,” coach Fisher said about her team’s mental approach at the plate.

The rain would come and wash away the scheduled matches for Saturday, matchups that included Hawaii and Southern Utah. To make up for the lost games the Rams added a game with Texas State Sunday after their morning matchup with Weber State.

Pitching would once again dominate as the Rams got their first shutout of the season over Weber State 4-0. Junior Kaylynn Pierce dominated the Wildcats by only allowing two hits with no walks and three strikeouts. Pierce was able to pitch into some bad contact and roll most of the Weber State offense over.

Nelson was the offensive hero yet again after her two run home runs in the fifth inning that put the Rams up 4-0. Senior Haley Hutton had an RBI double in the second inning that scored another Ram off of an error that put them up 2-0.

“Amber had a good weekend, her two run home runs definitely gave us some breathing room against a pretty solid Weber State that wouldn’t go away,” Fisher said.

The offense would go quiet in the final game of the weekend against Texas State in the Rams’ 3-0 loss. CSU was only able to get four hits and left six runners on the bags. Bridgette Hutton took the mound and gave up two hits and one walk and only earned one run.

Her defense struggled with four errors, three of them coming in the third inning that allowed for Texas State to get two of their runs.

Despite the struggles of the last game Nelson performed well at the plate as she finished the weekend with a hit in every single game and Buchanan and McCorkhill continued their hot start to the season.

This kind of offensive production from the middle of the lineup has coach Fisher pushing these players to remain feisty at the plate.

“They are doing good,” Fisher said. “I think we are looking for little bit more consistency, but I think they are working hard.” Fisher would also add how she thinks Gamboa is coming into that middle of the lineup role as well.

CSU is now 5-4, heading into a small break that will give them plenty of time to learn from the games in Texas and Las Vegas.

The Rams will take the field next on Feb. 28 for their home opener against Northern Colorado. The game will start at 3 p.m. MT.