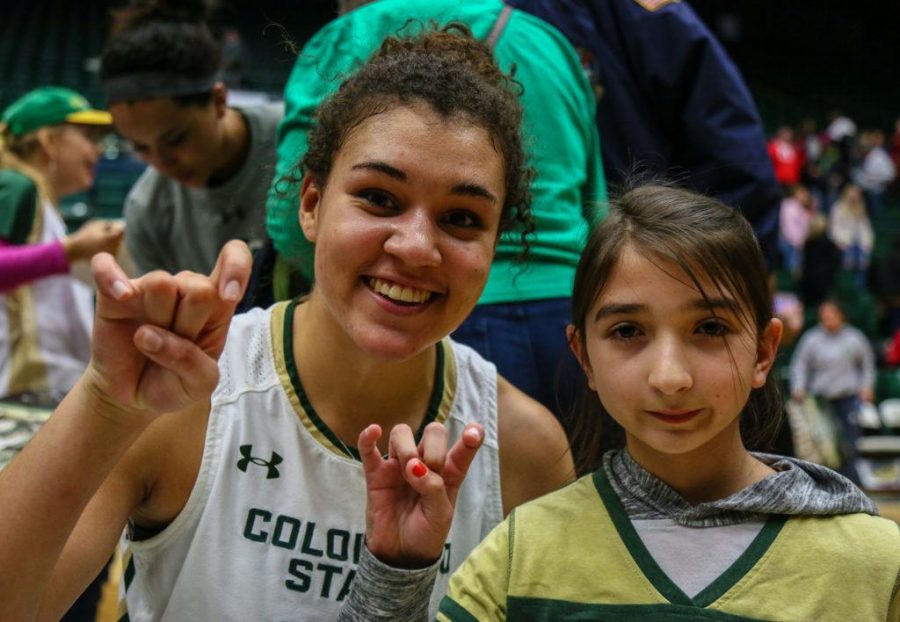 Growing up in Fort Collins, Colorado State sophomore Myanne Hamm always dreamt of donning the green and gold. From summer camps as a youngster to more competitive team competitions at an older age, Hamm has been engrained in Colorado State basketball and its tradition for years.

That dream has become a clear reality: Hamm has developed into one of the most important players for the Rams this season.

Last year, the Poudre High School grad took a backseat for a team rich with upper-class talent as she continued to develop her game. She appeared in eight games averaging less than five minutes of action. To begin this year, she served as the second or third option off the bench.

Now, it is hard to imagine this team experiencing the success they have without Hamm’s contributions. She has blossomed into the Rams’ sixth-woman role, at times playing more minutes, and more meaningful minutes, than some starters.

The season long stats that Hamm has posted will not jump out at anybody. But since scoring 16 points against New Mexico on Jan. 14, Hamm has averaged north of seven points per game coming off the bench. For a team that has struggled to find its rhythm on offense at some points during that stretch, those seven points pack a much heavier punch.

“It can be hard to come off the bench sometimes, especially if you get cold a little bit,” Hamm said. “But to be able to be an option off the bench, my confidence has definitely grown. I’m happy that it’s made me confident in myself.”

But the most valuable aspect of Hamm’s game is something that does not show up on the stat sheet at all. She has a knack for making the big play at the most opportune time. In a word, she’s clutch. Earlier this season, in a stretch of three games, that was never more apparent.

In the Rams victory against Fresno State on Feb. 11, Hamm caused a jump ball with 11 seconds remaining and the Rams trailing by three. On the ensuing possession, Hamm drilled the 3-pointer with five seconds to go to send the game into overtime.

Although she didn’t score a single point in the team’s next game against Wyoming, head coach Ryun Williams raved about Hamm’s performance after the game. Defensively, she recorded a block and two steals and forced other turnovers down the stretch with tips and deflections.

“Myanne’s got golden hands, those things are magical,” Williams said after the game. “She gets touches, pokes. She’s a nuisance and she disrupts the ball. Myanne has been one of our MVPs down the stretch. We go to her late, we really like her defensively in a late game situation. Instinctively, she’s maybe one of the best defenders we have.”

In a game against New Mexico on Feb. 22, Hamm again made her presence felt in the closing minutes of the game. She hit the go-ahead three-pointer with under two minutes remaining to give the Rams the lead that they would not relinquish. In the final minute-and-a-half of action, Hamm recorded two steals with those golden hands, one of which she took coast-to-coast for a layup.

The defensive presence that Hamm brings flows effortlessly into the Rams’ defensive approach.

“A lot of it is instincts,” Hamm said. “I just really like defense, that’s where I get my energy from. As a team, once our defense is good our offense is good. Being able to bring that energy and build off each other helps us as a group.”

When the team is slacking offensively, they can rely on defensive pressure to create chances at the other end. Their ability to stay committed defensively despite offensive woes has proven crucial in conference play.

“If we get two stops in a row, especially off of steals or other turnovers, it just builds our confidence,” Hamm said. “We not only get the ball back but we get a good opportunity to score and limit their chances.”

With Colorado State having already secured their fourth straight, and unprecedented, Mountain West title, Hamm will have one more opportunity in the regular season to prove her worth.

And for the girl who once dreamed of being in the position, she is now, you can bet she’ll be ready.

“Being able to be on the Moby floor, but this time in a jersey, is great,” Hamm said. “It’s definitely a dream come true.”

Colorado State will take the floor against Nevada for their season finale on Friday at 7 p.m. in Moby Arena.

Colin Barnard can be reached at sports@collegian.com or on Twitter @ColinBarnard_