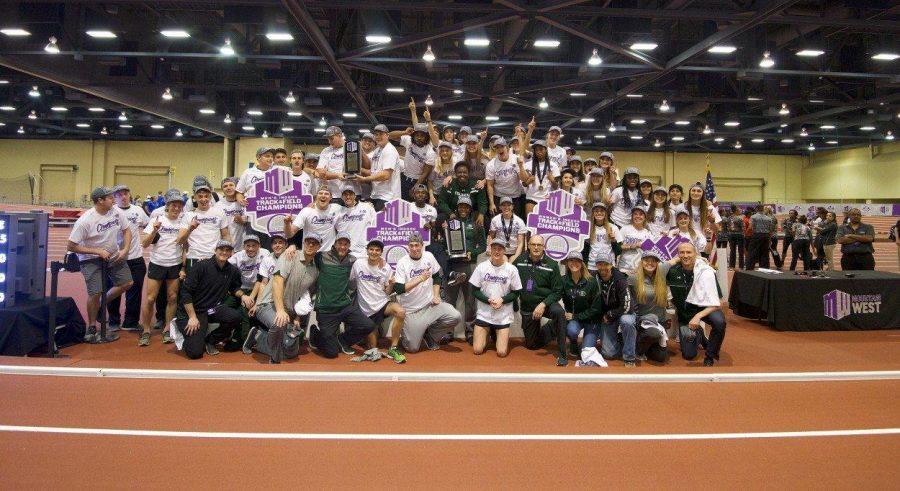 It was a golden weekend for the Colorado State Rams track and field team.

For the first time in program history both the men’s and women’s teams took home conference titles at the Mountain West indoor conference championships in Albuquerque, New Mexico this past weekend.

“It’s special. It’s historic for us,” CSU head coach Brian Bedard said. “It’s so hard to do. On the women’s side there’s a lot of competitive teams. UNLV just had an outstanding meet. They caught us by surprise a bit to be honest and luckily we finished strong and finished well.”

The men’s team got off to a strong start on Friday as seniors Josh Cogdill and Nick Kravec finished first and second, respectively, in the heptathlon. Cogdill, who finished first, or tied-for-first in four of the seven events, scored 5,546 points for the win while Kravec tallied 5,415.

Cogdill’s win marks the fourth consecutive time a CSU athlete won the conference title in the heptathlon after Hunter Price in 2016 and Justin Green in 2014-2015.

“They competed great,” CSU assistant coach Ryan Baily said of the multi-event athletes. “To go out and make a statement like that was pretty cool. Those guys are horses. They set the tone for a strong day for our men’s team and I couldn’t be prouder.”

The Rams also got Friday conference titles from junior Jerrell Mock and senior Hunter Price. Mock won the 5,000-meters with a time of 14:49.02 while Grant Fischer finished just behind Mock in second place at 14:50.31.

Price tied the school record in the high jump with his leap of 7-0.5 to claim the Rams’ first conference title in the event since 2004.

Though the men’s team led the team standings for much of the meet, Saturday afternoon saw the Rams trailing Air Force after 15 events. However, after strong team finishes in the 3,000 and the shot put the Rams retook the lead and never looked back.

In the shot put junior Mostafa Hassan continued his dominance this season. Hassan won the event with a throw of 69-10.75 – which smashed the conference record and now sits as the best throw in the country this season by over two feet.

“It feels awesome,” Hassan said of his record-setting throw. “I knew I had a big throw in me for the past couple of weeks. I just kept missing it every meet, so it feels amazing to finally throw that.”

The men’s team sealed the victory in the 4X400 relay as the team finished ahead of Air Force in the event. The men’s team ended the meet with 183 points — good enough for a six-point win over the second place Falcons in the team standings.

Unlike the men’s team the women found themselves trailing as day three opened up, but they would not be behind for long.

The women took the lead for good in the second event on Saturday — the high jump — when Autumn Gardner (5-9), Mckenzie Wright (5-8) and Isobel Brown (5-7) finished third, fourth and fifth, respectively.

The women’s team got another individual conference title from senior Emily Romo in the 400-meter run. Romo, who took home the indoor title in the same event last year, won the event with a time of 54.07. Junior Macy Kreutz joined Romo with a strong finish in the middle-distance events as Kreutz’s time of 2:08.72 in the 800 ranks as the second best indoor mark in school history. Kreutz finished in fourth place in the event.

Kreutz and Romo helped finish off the meet for the women’s team in the 4×400 relay where the Rams finished third in 3:42.89 to hold off a late push from UNLV. The women finished just behind UNLV in the relay and took home the team title with 102.5 points over UNLV’s 99.

“Our staff felt really good about our team coming in,” Bedard said. “We have some good senior leadership and some folks that really like to compete. The bottom line is that our team just stuck together. I’ve got the greatest staff – I’m so proud of my staff – having the team ready, conditioned, technically ready and able to compete.”

Up next: CSU track and field athletes who qualified for the NCAA indoor track and field championships will travel to College Station, Texas for the meet set for March 10-11.