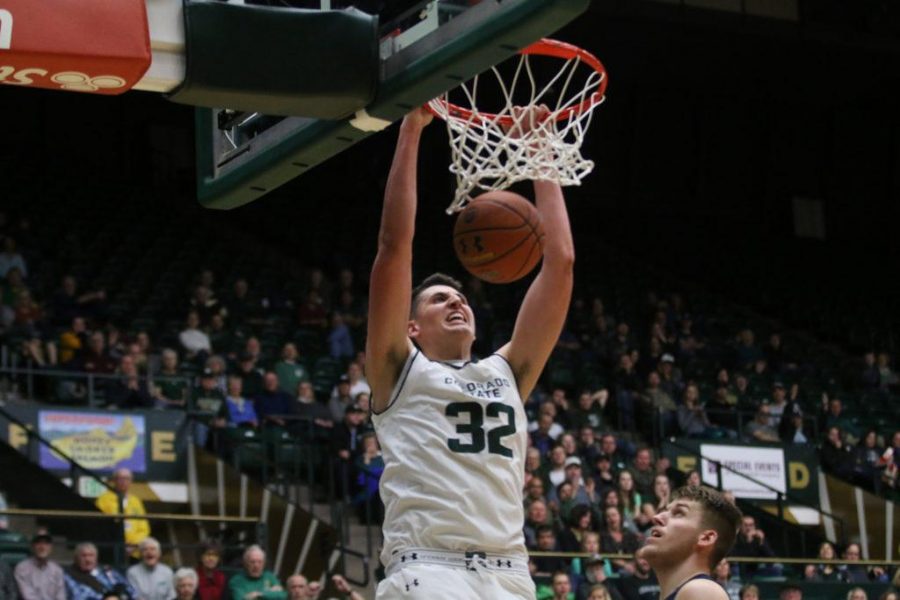 Freshman Nico Carvacho slams one through the hoop during the second half of against against Utah State. The Rams came out on top by the score of 69-52. (Elliott Jerge | Collegian)

It was a struggle to get the lid off the basket early, as Colorado State and Utah State each came out frigid Tuesday night at Moby Arena.

The Aggies, on the other hand, were smothered by the Rams defense for 40 minutes as Utah State scored the second fewest points by a MW opponent against CSU this season.

Colorado State held Utah State scoreless for the opening 5:33 of the game. The Rams began the game on a 7-0 run, but only managed four points of their own in the first five minutes.

Utah State was held to a lowly 35.6 percent shooting from the floor and only 32.2 percent in the first half.

“We came into the game talking to each other saying that we are going to start the game playing defense, we don’t care about the offense,” senior guard Gian Clavell said following the win. “As long as we play defense we’ll be fine.”

In the final 2:55 of the opening 20 minutes, the Rams went on a 10-0 run that gave them a 33-23 halftime lead. The run was sparked by three consecutive made three-pointers. Prentiss Nixon hit the first two, followed by Gian Clavell.

“When teams start keying in on me and Gian, other guys have to start making plays and we believe in them,” Emmanuel Omogbo said. “That’s what (Carvacho) did tonight.”

After a slow first half, Gian Clavell was able heat up from the field late and helped the Rams stretch their lead to as big as 18.

In a span from the 6:54 mark in the second half to 3:43, Clavell scored 14 straight points for CSU on 5-of-5 shooting, making four three pointers during the stretch. The guard finished with 24 points, four rebounds, and four assists. Clavell’s six three-pointers set a season high for all CSU players.

“What’d I tell you, everytime he scores the ball keep going to him,” Omogbo said. “We don’t care, take a shot from half-court. He’s a good player, he makes really good plays for us.”

Omogbo notched his 14th overall and third straight double-double of the season with 10 points and 14 rebounds. Sophomore Prentiss Nixon flirted with a triple-double, finishing with 11 points, seven rebounds and seven assists.

“He’s (Nixon) working hard,” Eustachy said. “He takes a turnover hard. He wants to get better.”

With eight conference wins on the season, CSU has now tied their regular season total from the 2015-16 season. The Rams sit a half game behind first place Boise State in the Mountain West.

“I said it at the beginning of the year, we have a chance to win it (Mountain West),” Clavell said. “We are good enough. Like I said when Voc (Devocio Butler), Che (Che Bob), and KJ (Kimani Jackson) couldn’t play, we have seven good players that can get the job done.”

Colorado State concludes its two-game homestand on Saturday Feb. 11 at 2 p.m. MT against Fresno State (14-9, 6-5 MW) . Fresno State trounced CSU 78-57 for their worst conference defeat of the season earlier in January. The game can be seen on ESPN3.