CSU knocks off New Mexico in The Pit 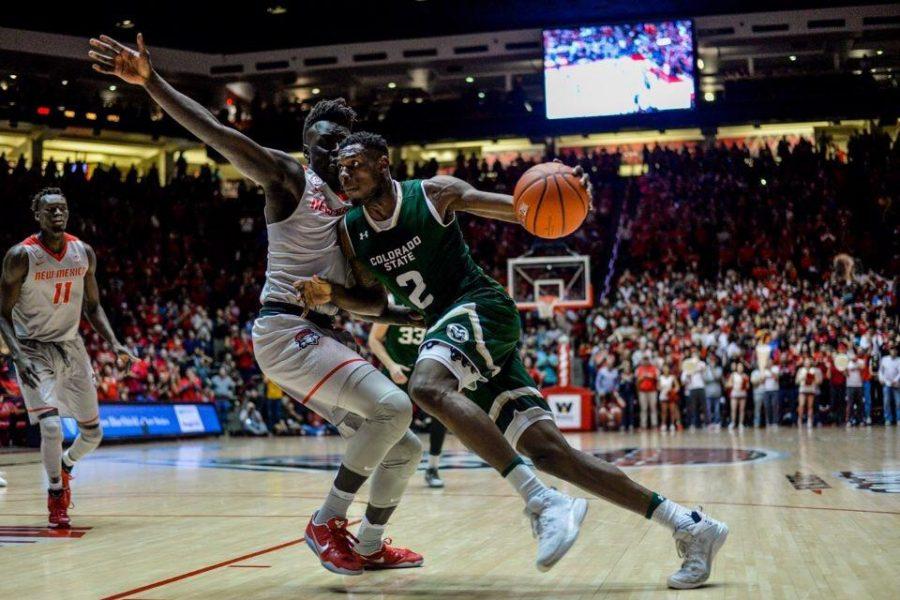 The game was marked on Colorado State’s calendar, and after defeating New Mexico 68-56 in front of a sold out crowd of 12,078 at The Pit Tuesday night, the Rams again sit alone atop the Mountain West standings.

The last time CSU had won at New Mexico before Tuesday night was in 2007.

After a physical 84-71 home loss on Jan. 14 to New Mexico, and the verbal altercation between Emmanuel Omogbo and New Mexico assistant coach Terrence Rencher that followed, the rematch between the Rams and Lobos was set with no shortage of anticipation.

The Rams had lost eight straight games to New Mexico at The Pit coming into the rematch. The win Tuesday night put an end to the losing streak at The Pit and extended CSU’s road conference win streak to five games — the longest since the 1989-90 season. CSU is now 3-42 in The Pit since 1972.

“This team continues to accomplish things that many thought they couldn’t and it starts and finishes with our two seniors,” CSU head coach Larry Eustachy said in a statement. “They are providing great efforts and great leadership and everyone is just doing whatever they need for us to win.”

The senior duo of Gian Clavell and Emmanuel Omogbo once again led the Rams to a fifth straight victory, and their eighth win in nine games.

Clavell missed his first four shots of the game, but as the guard has typically done this season, eventually found his stroke. Clavell finished with 24 points on 9-of-21 shooting from the floor. The Puerto Rico native also went 4-of-8 from 3-point range.

Prentiss Nixon was the third CSU player to hit a double-digit point total in the game. Nixon scored 11 points and went 4-of-13 from the field.

As a team, the Rams shot 43.1 percent and only turned the ball over five times. CSU averaged 12 turnovers per game before the contest. The five turnovers marks a season-low in Mountain West play this season for the Rams, and also helped CSU hold the Lobos to zero fast break points in the game — CSU finished with nine fast break points.

Up next the Rams will host San Diego State on Saturday, Feb. 25. The game will tip-off at 6 p.m. MT and can be seen on CBS Sports Network. Colorado State will enter the game either in sole possession of first place in the Mountain West or tied with Nevada and/or Boise State for first. The game will be CSU’s annual orange-out.