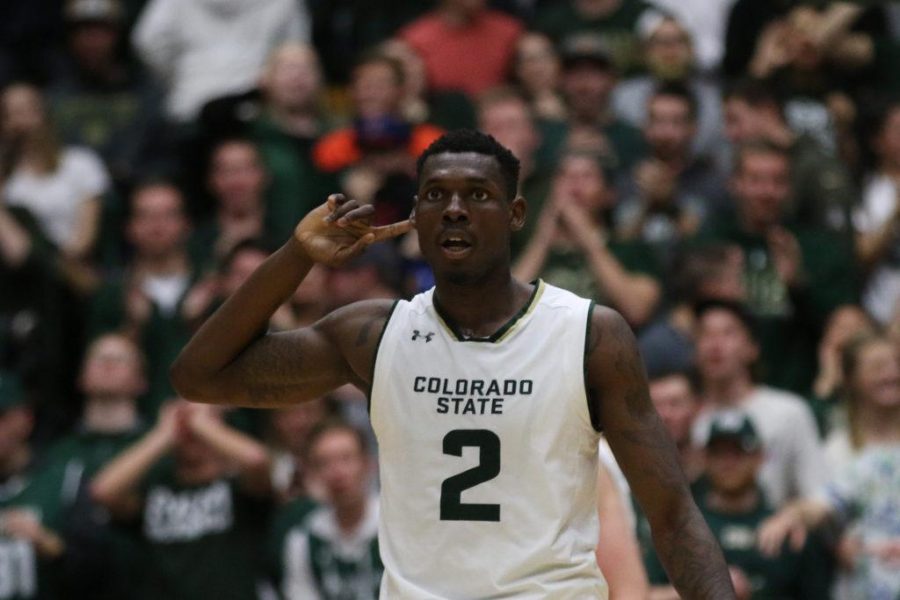 Senior Emmanuel Omogbo listens to the roar of the crowd during the final minutes of the game against Boise State. CSU lost a hard fought battle by the score of 79-76. (Elliott Jerge | Collegian)

After their second nail-biting one possession defeat of the season to Boise State earlier in the week, Colorado State responded with a much-needed 69-49 win over UNLV Saturday. CSU never trailed in the game.

The dominant victory in Las Vegas improved CSU to 15-9 overall and 7-4 in Mountain West play. The Rams are now a half game behind Boise State and Nevada, who currently hold a first place tie atop the conference.

While neither CSU nor UNLV were able to find an advantage on the glass in the contest (both collected 40 rebounds), the Rams dominated on both sides of the ball.

“I think timing has something to do with it,” CSU head coach Larry Eustachy said in a statement. “We came off a tough loss and know why we got beat last game. But I think this group is not your average group. They’re competitive, though awfully young. We expected to win this game. The home court diminishes as the year goes on — saw it against Boise and here today — in my experience.”

The 49 points allowed by the Rams marks the first time this season Colorado State has held an opponent under 50 points. The previous low allowed by the Rams was 56 to Stanford, Long Beach State and Utah State, respectively. CSU held the Runnin Rebels to just 30.5 percent shooting on the night, the lowest a Mountain West opponent has shot against the Rams this season.

While UNLV has four starters whom average over 10 points per game, Tyrell Green was the lone Rebel to eclipse the mark against CSU Saturday night.

On the offensive side of the ball, CSU was an efficient 45.8 percent from the floor.

“That’s the way you play basketball in general,” Eustachy said in a statement. “We were very patient and made the them guard us a long time and shot a good percentage because of it. And for a young team, with five young guys, to go on someone else’s court and not let the game break you down is quite a feat.”

Senior guard Gian Clavell played all 40 minutes, something that is becoming routine for him, and contributed 18 points and five rebounds on 7-of-15 shooting. Joining Omogbo and Clavell in the double-digit scoring totals was Prentiss Nixon. Nixon scored in double-figures for the tenth time in his last 11 games by scoring 11 points.