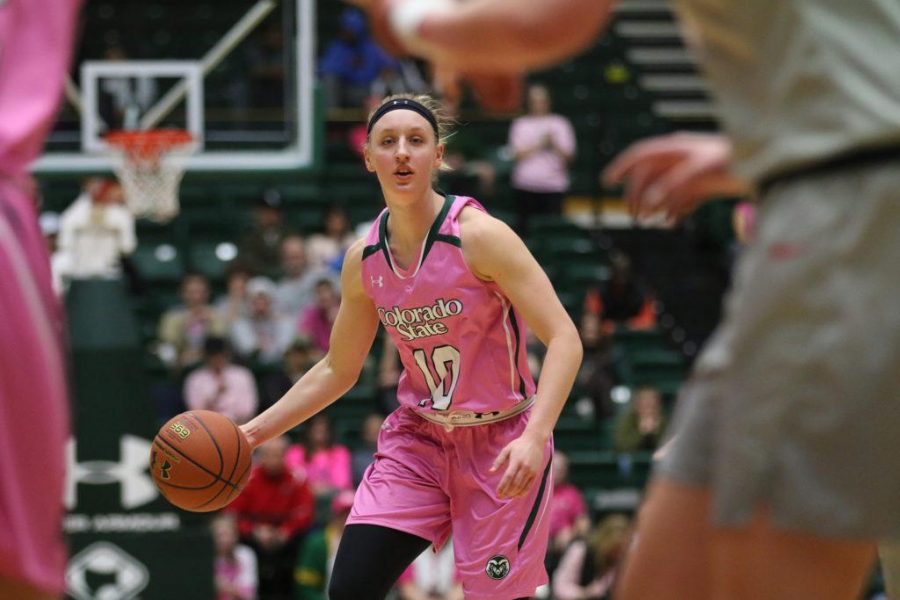 CSU Junior Hannah Tvrdy brings the ball down the court against the UNM Lobos on February 22 in Moby Arena. (Elliott Jerge | Collegian)

The second installment of the Border War was not friendly to the Colorado State women’s basketball team, as they lost to Wyoming 56-49.

Although the team has already secured the No. 1 seed in the Mountain West tournament, the performance was less than enthusing for the Rams (22-7, 14-3 MW). Despite the seemingly minimal margin of victory for Wyoming (20-8, 12-5 MW), the Cowgirls dominated throughout, leading by double-digits for the majority of the evening.

Elin Gustavsson led the Rams with 14 points, though she did not score for the final 15 minutes of the game. Sofie Tryggedsson’s 12 points, including three three-pointers, kept the Rams close late in the game. Ellen Nystrom also added 10 points.

The Rams came out ice cold from the field, scoring just four points in the opening quarter. The Cowgirls would take that lead and run with it, at one point pushing the lead to 20 points early in the second quarter.

“I think it was our mental approach to start the game, it’s that simple,” head coach Ryun Williams said in a statement. “We weren’t as ready to play as we needed to be. We had seven shots at the rim in the first quarter, seven. That just tells me that we weren’t ready to score the basketball. We had some really nice opportunities to start that game and you just have to convert.”

Natalie Baker led all scorers with 18 points and converted 7-of-9 attempts from the free-throw line. Free throw attempts, or lack thereof for the Rams, were crucial in this one.

Wyoming got to the line 19 times compared to just five attempts for the Rams. Though some of those attempts came down the stretch when the Rams were intentionally fouling, the Cowgirls controlled the tempo for much of the first half, forcing the Rams into uncomfortable situations.

The Cowgirls also out-rebounded the Rams by 13, an uncharacteristic trend for the MW champions. This allowed Wyoming to set up their motion offense, something Williams has praised in the past. Movement from the Cowgirls, especially late in the shot clock, caused fits for the Rams.

“We had some break downs and sometimes they found the right kids on our team that have a hard time defending some of that motion,” Williams said.

CSU played a much sounder second half of basketball, cutting the lead to single-digits on multiple occasions and outscoring the Cowgirls by seven. But after falling behind by so much in the first half, the deficit was too high to overcome.

Having already won the conference the game provided Williams an opportunity to try some new lineups before conference play. Freshman center Anna Dreimane, who usually plays only in the closing minutes, saw action in the second quarter. No starter played all 40 minutes and only Hannah Tvrdy played more than 30 minutes as Williams worked in his bench more often than usual.

“We could be in this situation next week,” Williams said. “We’ve been in that situation before, how are we going to respond? We need to be more aggressive. That’s the bottom line.”

The Rams will finish up the regular season on Friday night in Moby Arena against Nevada. On Senior Night Elin Gustvsson and Ellen Nystrom will be honored for their illustrious careers as Rams. Tipoff is set for 7 p.m.