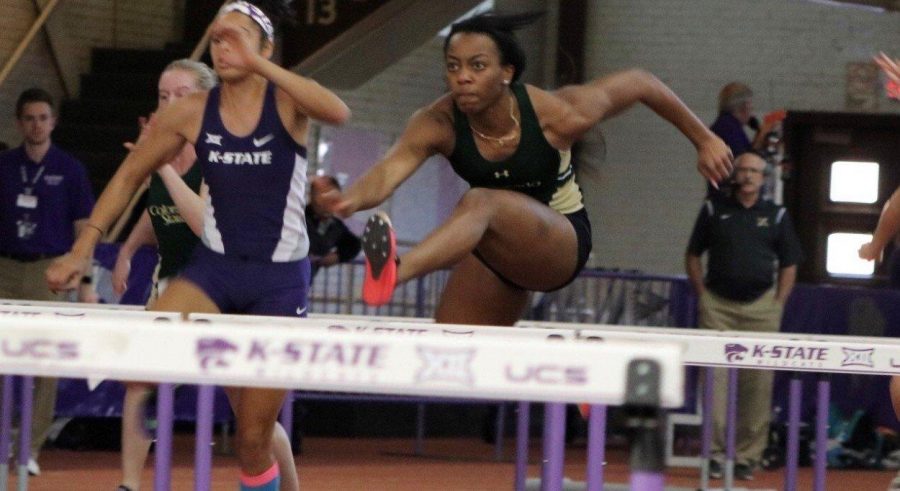 The Colorado State Rams indoor track and field team kept its momentum this weekend as the team continued to re-write the program record book at the Deloss Dodds Invitational in Manhattan, Kansas.

All CSU senior sprinter Lorenda Holston did last week at the Potts Invitational in Boulder was set the two fastest times in program history in the women’s 60-meter hurdles, running a time of 8.18 in the preliminaries and an 8.23 in the final en route to winning the event.

On Saturday, Holston upped the ante even more, running an 8.15 in the finals to break her own school record and win the event in meet record time.

Holston now holds the three fastest times in CSU history in the event, and she also claimed first place in the women’s 60-meter run on Saturday with a time of 7.51.

“What I like about Lorenda’s time of 8.15 is that historically, it’s been a mark that makes the NCAA Championships,” CSU sprints and hurdles coach Karim Abdel Wahab said. “We’re very happy, but we’re not satisfied yet. The goal is to continue to progress, contend for the conference title and work toward a better rank at the NCAA Championships.”

Holston was not the only athlete breaking records at the meet, as junior shot putter Mostafa Hassan added another honor to his already illustrious career when he set a meet record with a 65-1.5 to win the men’s shot put by over 6-feet on Saturday.

And the Rams swept the shot put events when senior Aaliyah Pete hit her best mark of the year with a 54-6.75 to take home first place in the women’s shot put event.

“Considering Mostafa (Hassan) just got back from Egypt and was blasted from travel, I thought he responded very well to competition,” CSU head coach Brian Bedard said. “We’re working on some things with him technically that requires him to be a little more relaxed – and he got a little amped up – but I obviously thought he did a good job. Lorenda had a big day, moving up in the NCAA standings. Aaliyah Pete obviously had a big day too, so we had some real highlights.”

Other Rams with solid meets included senior Josh Cogdill and junior Nick Kravec, who went 1-2 in the men’s heptathlon. Cogdill won the event with a score of 5,217, while Kravec ended Saturday’s competition with 5,107 points.

Junior Hunter Price took the weekend off from heptathlon action and led the Rams to a 1-2-3 finish in the men’s 60-meter hurdles. Price ran a 8.14 to win the event, while Jalen Hunter finished just behind Price with a time of 8.16. Teammate Jace Horak completed the CSU sweep, running a time of 8.33 in the finals.

In the women’s pole vault, junior Stephanie Bess finished tied for first with a mark of 12-2, while freshman Aliya Simpson hit a personal best mark of 11-8 to take home third place. Bess’s 12-2 now sits as the eighth-best mark in CSU history.

Colorado State track and field will be back in action Feb. 3 in the CU Invitational in Boulder, Colorado and also the New Mexico Collegiate Classic and Multis in Albuquerque, New Mexico.