Rams bounced by Buffs at home to begin spring season 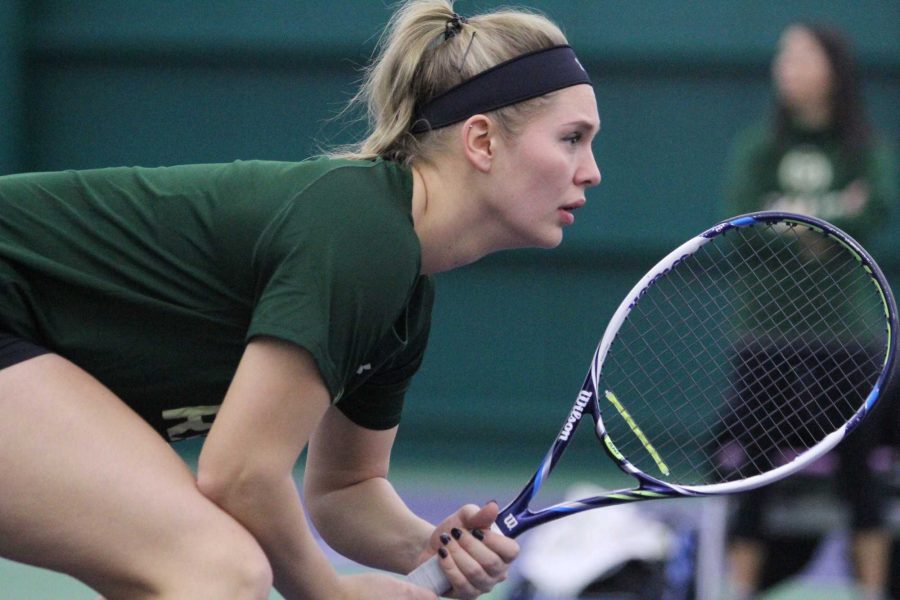 Senior Madison Porter waits for a ball in a 7-0 defeat against Colorado on Jan. 21 (Javon Harris | Collegian)

The Colorado Buffaloes came into the Fort Collins County Club and took care of business against the Colorado State Rams, winning the match 7-0 as the Rams started out their spring season with a loss.

It started with the doubles matches where the Rams No. 3 squad of Riley Reeves/Solene Crawley were defeated 6-1 by the Buffs’ Annabelle Andrinopoulos/ Ilana Oleynik. The No. 2 squad did not fair much better as CU’s Nuria Ormeno Ruiz/Chloe Hule took home the match 6-3 over CSU’s Celine Voss/Madison Porter.

“We didn’t fold,” CSU head coach Jarod Camerota said. “There were several matches in which we fell behind early but fought back and took the next set. I was pleased to see the way we battled.”

The doubles matches count as one total point for the overall match, meaning after the two losses by the Rams, the third match between the two No. 1 squads was stopped early in the best of three setting. The Rams duo of Emily Kolbow/ Alyssa Grijalva was leading 5-3 over CU’s Louise Ronaldson/ Jeannez Daniel at the stoppage of play.

In the singles matchups, sophomore Kolbow was in the first seed against Ormeno-Ruiz, who is currently ranked 77th by the Intercollegiate Tennis Association and has three wins against ranked opponents this season.

Despite Kolbow’s serving struggles, she held a 4-3 lead in the first set before the mistakes caught up to her and costed her the last three games and the first set 4-6.

An impressive run down of a ball that went over Kolbow’s head in the corner resulted in a momentum swing on game point to tie the second set at two games a piece. However, Ormeno-Ruiz took the winning point to secure the match 4-6, 4-6 which resulted in a frustrated Kolbow tossing her racquet across her side of the court.

The match of the night came in the second flight between freshman Grijalva and CU’s Daniel. The first set went to Daniel 6-2, but was filled with long rallies. Grijalva rode her emotions to a 6-3 second set win to force the deciding third set.

With CSU down 3-0 in the overall match, Grijalva needed to win the third set in her match for CSU to have any chance of winning the best-of-seven series.

Grijalva fell down 4-1in the set and seemed to be out of it, however she rallied to tie it the set and try to keep the Rams hopes alive. Daniel went on to take the next game hold serve to go up 5-4.

In the final game, Daniel sent two shots down each line of the court that Grijalva had no chance of returning, clinching her match win 6-2, 3-6, 6-4 and the overall match for CU.

The rest of the Rams squad was not able to secure a victory, but there were some positives to take away from the 7-0 shutout by the in-state rival.

Colorado State will be back on the court next in Wisconsin against the Milwaukee Panthers on Jan. 28.