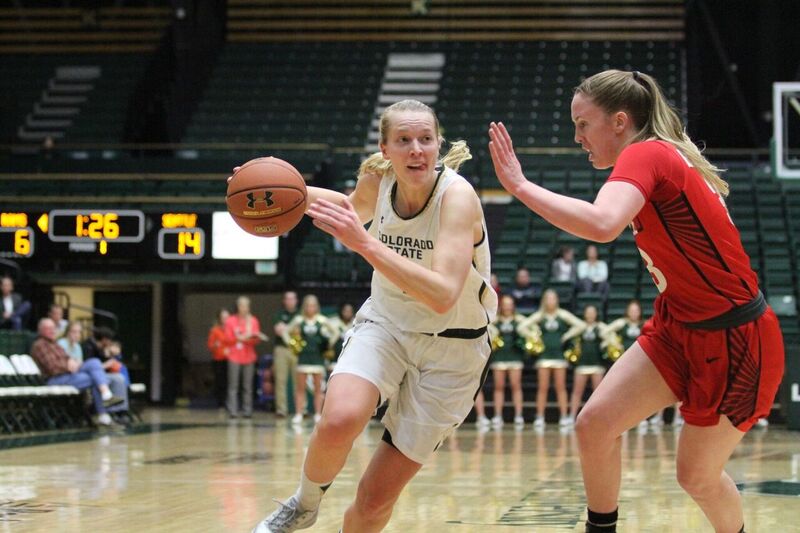 Less than one-third of the way through conference play, the Mountain West has already been littered with abnormalities. From a supposed bottom feeder vaulting to the top of the standings to an on-court brawl between Utah State and UNLV, it’s been an unusual beginning to conference play.

With students returning to campus and classes starting up again, here’s how the MW looks through five games of conference play:

Record-wise, the Rams were slow coming out of the gate losing three of their first six games and ultimately finishing non-conference play with a mediocre 8-4 record. All of those loses came against Power Five teams, however, and prepared the Rams for their conference opponents. Their sole loss in conference came at the hands of Boise State on Dec. 31. Coming off convincing wins against Air Force and New Mexico, the Rams may be hitting their stride at the perfect time.

Reigning conference player of the year Ellen Nystrom has stepped into more of a scoring role this year, averaging 15.8 points per game. As a team, the Rams have relied on defense and three-point shooting to get the job done. The team ranks sixth in the nation in scoring defense, allowing just 52.9 ppg, and 24th in the nation in three-point field goals made (138).

The Rams are set to enter the teeth of their schedule, with a particularly intriguing matchup coming against Wyoming in the final week of play that could be a decisive factor to the final standings. As the team grows more comfortable with its lineups, it will be no surprise to see them contend for their fourth straight regular season title.

The Cowgirls, pegged to finish eighth in the preseason poll, have jumped out to a surprising undefeated record in conference play. Led by junior guard Liv Roberts (15.8 ppg, 7.3 rebounds per game), the Cowgirls have impressed its naysayers early on. However, they have yet to play the likes of Colorado State, New Mexico or Boise State. Nevertheless, their impressive margin of victory in conference play (+18.4 ppg) and non-conference victory over the Colorado Buffalos, a team the Rams struggled with, show they are no pretender. Expect the Cowgirls to remain near the top of the standings until the end of the season when they close with a brutal five game stretch that includes four games against the three contenders behind them.

Picked to finish third in the preseason poll, the Bulldogs were limited early on by non-conference losses to Cal State Northridge and UC Santa Barbra. In conference, they narrowly escaped Nevada with a one-point victory and struggled mightily against top-half teams Wyoming and New Mexico. That being said, they nearly knocked off Boise State their last time out and still have the firepower to compete in conference play. Preseason all-conference center Bego Faz Davalos and guard Candice White currently rank sixth and seventh in the conference in scoring at 14.4 ppg and 13.9 ppg, respectively. With those two leading the way, the Bull Dogs will look to right the ship for the rest of the year.

Award Watch – Player of the Year

Ellen Nystrom (Colorado State) – After winning the award last season, Nystrom was picked to repeat as Player of the Year in the preseason poll, and she hasn’t disappointed. Nystrom has scored at a more prolific rate, up from 11.1 to 15.8 ppg, and leads all guards in the conference in rebounding, averaging 8.1 per game. Nystrom’s defense sets her apart as she is second in the conference in defensive rebounds per game (7.3) and steals per game (2.1). Additionally, Nystrom’s five double-doubles and seven 20-point games are both second in the conference. Given her all-around ability, she holds a slight lead for the award at this point in the season.

Dezz Ramos (San Jose State) – Despite being one of the smaller players in the conference, Ramos certainly doesn’t let that affect her ability to score the ball. The 5-foot-7-inch guard leads the conference in scoring and ranks ninth nationally with at 22.4 ppg. She also ranks third in the conference in assists per game (5.4), free throw percentage (.874) and minutes per game (33.1). The preseason All-MW point guard has the Spartans within striking distance in the MW as she looks to build upon her impressive campaign thus far.

Award Watch – Freshman of the Year

Shannon Dufficy (Utah State) – The 6-foot-2-inch forward from Australia ranks second on her team in scoring (9.0 ppg) and third in the conference in rebounding (9.3 rpg), the only freshman in the top 20 of the category. She has recorded three double-doubles and plays the second most minutes for Utah State. After a slow start to the year, Dufficy is one of three freshmen to have settled into a prominent role for the Aggies.

Mykiel Burleson (New Mexico) – A 2016 McDonald’s All-American nominee, Burleson was one of the highest ranked recruits coming into the MW and was picked as preseason Freshman of the Year. Her 10.1 ppg average ranks second among freshmen in the conference, but it’s her ability to score the ball in spurts that warrants consideration for the award.