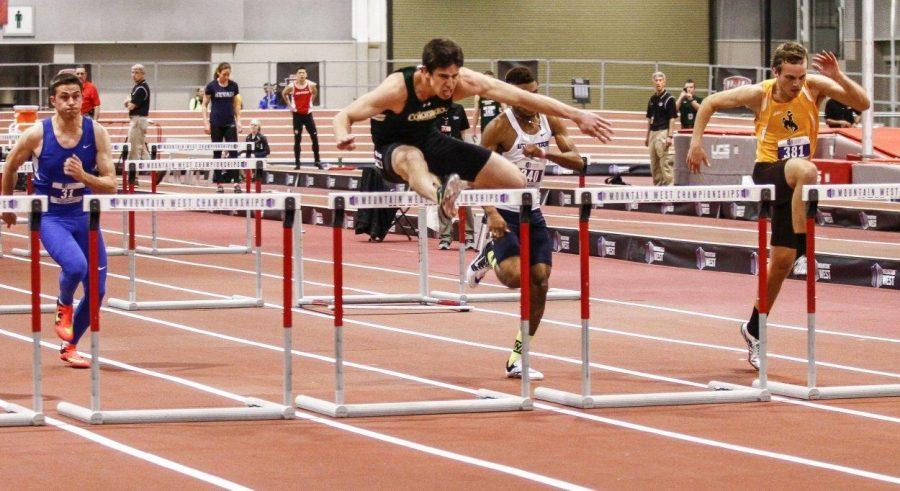 The Colorado State Men’s indoor track and field team was dubbed the No.9 team in the nation when the USTFCCCA (U.S. Track and Field and Cross Country Coaches Association) preseason rankings were released on January 9th.

The preseason rankings are formed from computer rankings based on athlete totals from the young 2017 indoor season which kicked off a little over a month ago, as well as previously scored marks from athletes in indoor seasons, such as school record high jumper Collin Scheer and All-American distance runners Jefferson Abbey and Jerrell Mock.

The surge for the Men’s team in the rankings was due in large part to junior heptathlete Hunter Price who smashed his own school record when he scored 5,906 points in the discipline at the Mines Alumni Classic and Multis hosted by The Colorado School of Mines in December.

Price’s previous best of 5,621 was set last season in the Mountain West Indoor Track and Field Championships when he took home first place in the event. His mark of 5,906 currently places him second in the country behind Luca Weiland of Minnesota, and stands as the all-time best in the Mountain West conference.

“It’s definitely a satisfying, rewarding feeling,” Price said about besting his own record. “After I broke the school record last year I was happy about it obviously, but at the same time, in my mind, I had a lot more to offer. I was still hungry for more and that still stands for where I am at right now.”

Other early CSU Men’s contributors include fellow multi-event athletes in senior Josh Cogdill and junior Nick Kravec. Kravec’s 5,508 in the heptathlon at the Mines meet is currently the 5th best score in the country, while Cogdill’s 5,422 set at the same meet places him 7th in the nation.

No other Men’s athlete may come into the 2017 track and field season with higher expectations than star shot putter Mustafa Hassan, who has a lot to do with where the Rams are ranked right now. The junior All-American swept the indoor and outdoor shot put competitions in the Mountain West last year, and he is fresh off of a third place finish in the NCAA Division One outdoor track and field championships this past June.

At the Wyoming Power Meet in December, Hassan hit a mark of 65-07.75, which was good for an indoor personal best and it’s a mark that is currently almost two inches better than the second best toss in the nation.

The No. 9 men’s team received even more recognition this week when sophomore distance runner Cole Rockhold was named the conference’s track and field athlete of the week after running a personal best of 4:08.20 in the Mile at the Potts Invitational in Boulder last weekend. Rockhold’s altitude adjusted time of 4:02.15 sits as the fourth-best time in the mile across the country.

The men’s team has the preseason ranking and the early success, but now it is all about carrying that momentum into the Indoor Conference Championships in Albuquerque on February 23-25, as the team looks to improve on their third place finish from a season ago.

“I think we are sitting in a good spot right now where we have a well-rounded group across the board.” Price said. “I am really excited to see what this team can do. There’s definitely some good competition in our conference, but from what I’ve seen from our team, there is no reason why we shouldn’t be in contention for a podium finish.”

While the Men’s team is off to a strong start both on the track and in the rankings, it is the CSU Women’s team that still holds the Mountain West hardware after winning the last two outdoor championships, as well as last year’s indoor conference title.

Senior sprinter Lorenda Holston emerged as another key member on the women’s side, after she took home Mountain West track and field female athlete of the week honors after last weekend’s meet at the Potts Invitational.

With an altitude adjusted time of 8.20 in the preliminaries of the 60m hurdles, Holston broke the CSU school record, and her time currently places her seventh in the country and second best all-time in the conference in the event.

The Rams return to action this weekend at the Deloss Dodds Invitational & Multis in Manhattan, Kansas.