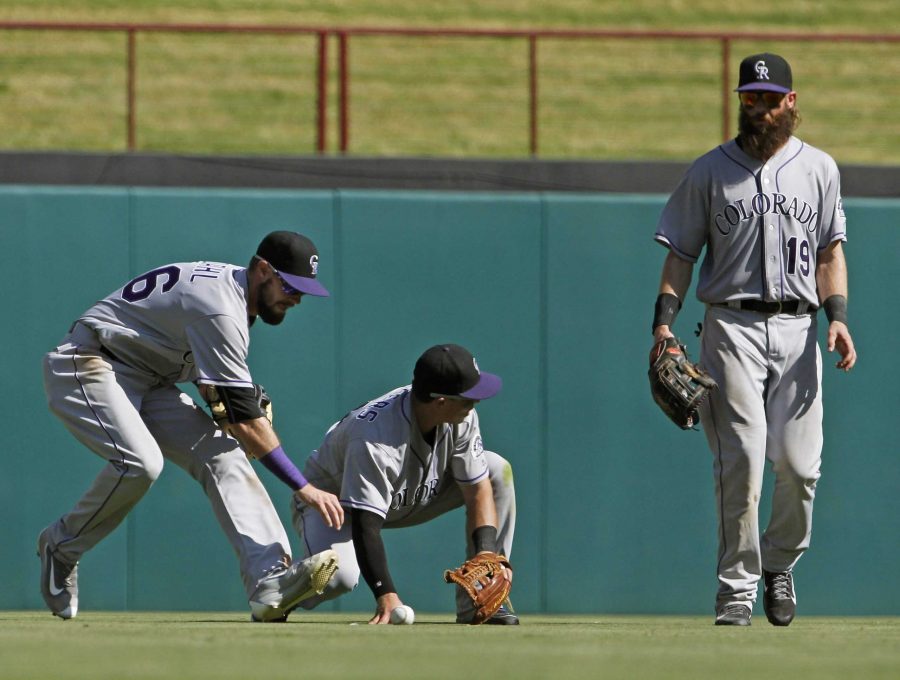 The Colorado Rockies' David Dahl (26), Tony Wolters and Charlie Blackmon (19) scramble to get a ball hit by the Texas Rangers' Adrian Beltre in the eighth inning at Globe Life Park in Arlington, Texas, on Thursday, Aug. 11, 2016. The Rockies won, 12-9. (Paul Moseley/Fort Worth Star-Telegram/TNS)

The Rockies are coming to town.

The Colorado Rockies announced details of their five-day 2017 Winter Caravan tour across the Rocky Mountain region, which will stop in Fort Collins on Wednesday, Jan. 25.

The tour is designed to offer fans an opportunity to connect with Rockies players and staff in addition to conversing with members of the organization about the current state of the team. Some of the player names highlighting the tour include: Chad Bettis, Jon Gray, DJ LeMahieu, Trevor Story, Tony Wolters and David Dahl. Rockies manager Bud Black, who was hired in November 2016, and general manager Jeff Bridich will also be joining the caravan at select stops.

“It’s just to meet and greet our fans, and for them to just be able to see the players and see Bud Black, see our staff,” said Warren Miller, Colorado Rockies director of communications. “Just to have sort of informal conversations and really celebrate our fans.”

When the caravan visits Fort Collins on Wednesday, fans will be able to meet with outfielders David Dahl and Gerardo Parra, pitcher Carlos Estevez and catcher Tom Murphy.

“I think (the players) are excited,” Miller said about the player’s enthusiasm for the trip. “I think it gives them a chance to relax and sort of joke with fans and joke with each other, and I think the fans like that interaction the players have with each other when they are relaxed and they’re not at work, they’re not in the ballpark, so that’s important.”

The meet and greet with the players will take place in the Lory Student Center at 11:15 a.m. Fans will have around 30 minutes to meet with players before they move on to go to the Rio Grande Mexican Restaurant in Old Town for an invitation only lunch. Following the lunch, the organization will visit the Poudre Valley Hospital before heading up to Wyoming for another fan session and the University of Wyoming basketball game against UNLV.

“You know it is hard during the year to really reach out to our fans with players cause they are on the field and they are busy, but this gives them a chance to really meet and greet with our fans and to engage with our fans,” Miller said about the mission of the caravan. “It is all about the fans. We obviously play in Denver but we have so many fans not only around the Denver area but beyond, whether it’s Colorado Springs or Fort Collins, and beyond in other states. It’s just important for us to go out and have those conversations to see what fans think about our team.”

The caravan is set to visit Colorado Springs and Littleton on Jan. 24, Fort Collins and Larime, Wyoming on Wednesday Jan. 25, Grand Junction and Salt Lake City, Utah on Thursday Jan. 26 and Albequerqe, New Mexico on Jan. 27

Collegian sports editor Chad Deutschman can be reached by email at sports@collegian.com or on Twitter @Chaddeutschman