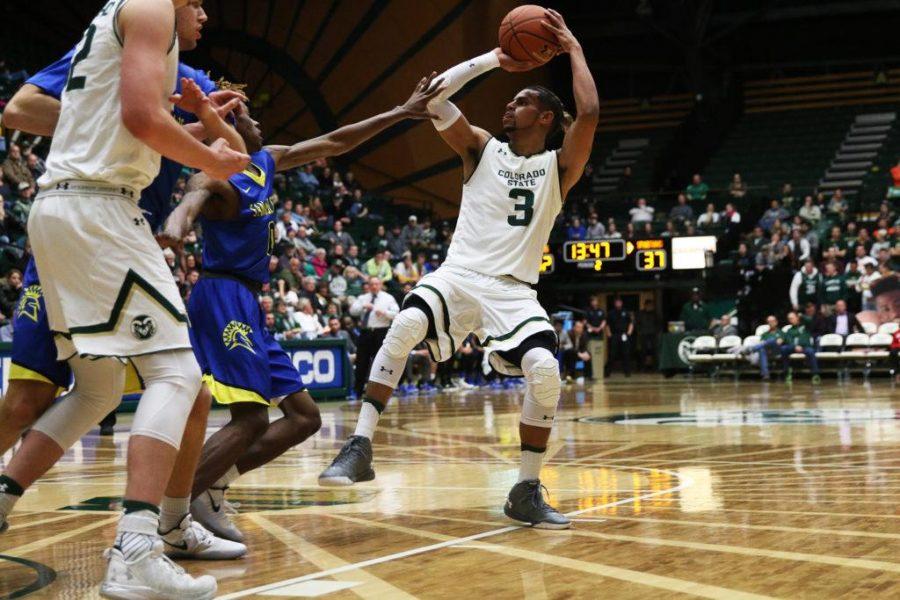 Senior Gian Clavell prepares to pop a shot during the second half of action against San Jose. (Elliott Jerge | Collegian)

Colorado State’s Gian Clavell was named the Mountain West Men’s Basketball Conference Player of the Week for games ending Jan. 29, the conference announced Monday. Clavell joins fellow senior Emmanuel Omogbo, who was awarded MW player of the week in November, as the only Rams to earn MW honors this season.

In a win over San Jose State on Jan. 25 Clavell collected his third double-double of the season with a then season-high 24 points and 12 rebounds while giving head coach Larry Eustachy his 100th career win at Colorado State. The Puerto Rico native shot 10-19 in the game with two assists, one blocked shot and three steals.

On Jan. 28, Clavell had his best game at Colorado State, leading the Rams to their first win at San Diego State in 14 years. The 6-foot-4 guard scored a career-best 37 points, two of which came on a game winning layup with 3.8 seconds left to give CSU a 78-77 win. Clavell shot 14-of-23 against the Aztecs including 4-of-6 from three-point range.

Clavell’s second-half of the San Diego State game was where the senior separated himself from the pack as he went 11-of-14 from the field and scored Colorado State’s final 12 points in the game, scoring 30 of his 37 points in the half. Clavell finished the game with 37 points, eight rebounds and two blocked shots.

The two-win week for Colorado State helped the team stay in the hunt for a conference title, as the Rams are tied for second in the Mountain West at 6-3. Colorado State will be back on the court Jan. 31 at 7 p.m. against Boise State (13-7, 6-3 MW) in Moby Arena. The game can also be broadcast on ESPN3.

Chad Deutschman can be reached by email at sports@collegian.com or on Twitter @ChadDeutschman