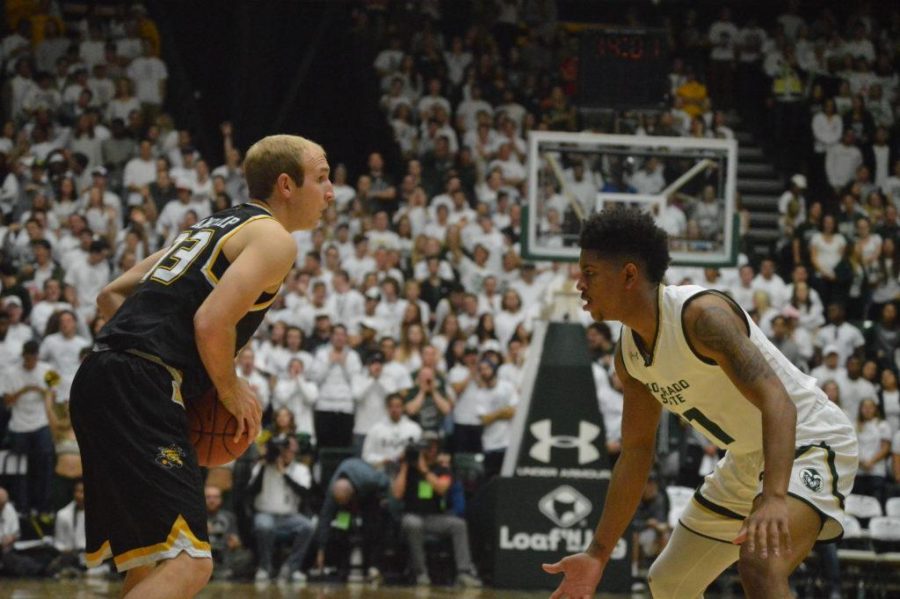 Less than 72 hours after upsetting the University of Colorado, the Colorado State men’s basketball team lost a tight battle to the Wichita State Shockers 82-67, in a game that featured nine ties and eight lead changes.

“They are a perennial power in the nation,” Larry Eustachy said following the loss. “It was a great week… We had a great win and we had a great teaching session today. We played hard, but we just met our match.”

In what is starting to become a trend for the Rams, Colorado State kept this game tight by playing excellent team defense. The Rams were able to make it tough on the Shockers by not allowing anything in the post and daring them to attempt long range jump shots.

Offensively it was a struggle for both teams, especially in the first half, with each going at least seven minutes without scoring a field goal. The game was physical, as the officials really let the players play Saturday and it took both teams a while to adjust to the pace of play.

In the second half, both teams saw things open up a little bit offensively and the shooting percentages for both teams went up significantly. The Shockers lit it up from beyond the arc, making 13-of-27 three point attempts, including 7-14 in the second half.

“We contested a lot of those three’s, but you know they practice a lot and they made a lot of shots,” J.D. Paige said. “We made an adjustment not to come off on ball-side, and once we did that, it kinda slowed down a little bit, but by that time they were already in rhythm and comfortable.”

Where Wichita State really benefitted was with their depth, getting 44 points off the bench, compared to just 14 from the Rams.

After being led by the big men in the victory over the Buffaloes, it was the CSU guards that accounted for the majority of the production against the Shockers. Prentiss Nixon (18) and J.D. Paige (17) combined for 35 points on the afternoon, as the sophomore guards each put together excellent performances on both ends of the court.

“Me and Jeremiah got hot early and we just rolled with it,” Nixon said. “Last game the bigs were doing their thing in the first half and we kept going to them. Whoever has the hot hand, we are going to keep going to them all game.”

Nixon made 5-6 attempts from beyond the arc in what was easily his most impressive jump shooting performance of the season thus far. Paige provided an offensive spark and attacked the rim aggressively, twice completing three-point plays.

Despite failing to create much rhythm on offense, one area where the Rams thrived was from the free throw line. The Rams made 24-29 free throw attempts (82.8 percent) and used the charity stripe as a fallback when the team needed a bucket most.

Where the Rams will look to improve is in the turnover department, recording 19 against the Shockers Saturday and 39 combined in Colorado State’s two losses this season.

“By far, 80 percent of our concern going into that game was not turning the ball over, because they can make you pay and they did with 25 points,” Eustachy said.

The Rams (6-2) will take the court again Tuesday Dec. 6, for a home matchup with Arkansas Fort-Smith.