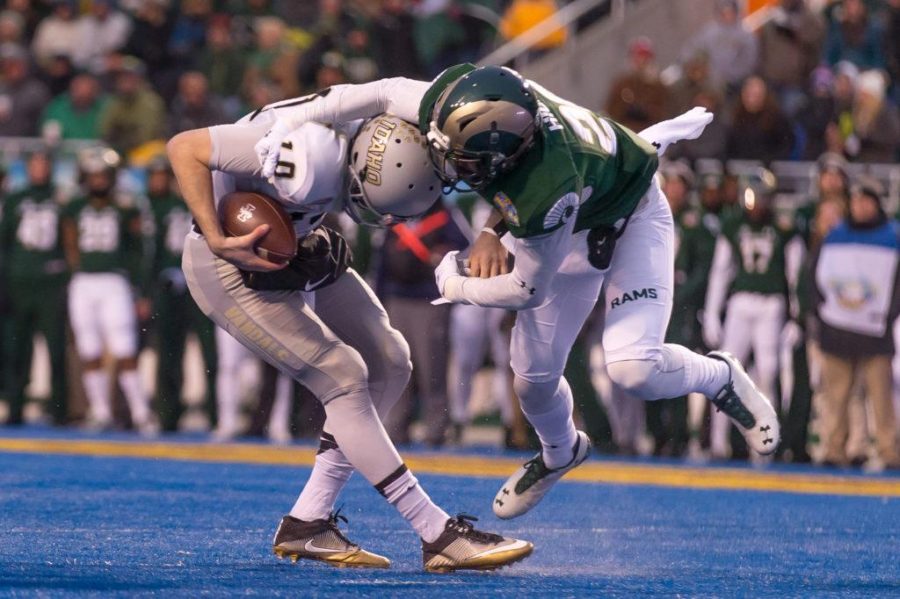 The 20th Famous Idaho Potato Bowl started with Colorado State seeking a bowl victory for the first time in three years, and ended to no avail. The 15-point underdog Idaho Vandals battled the cold and sent CSU packing in a 61-50 rout at Albertsons Stadium.

The game started cold, rusty and ugly, as neither team could establish any rhythm on offense. Colroado State marched down the field on the first possession of the game but failed to convert on a fourth-and-one from the Idaho 21-yardline.

On CSU’s second possession, Nick Stevens was intercepted by Jayshawn Jordan. The interception was just the second for Stevens since returning as the starter in week six. For Jordan, it marked his team leading sixth interception of the season.

The first quarter ended scoreless, with both teams only able to muster up a pair of first downs.

The second quarter quickly erased the scoreless deadlock, as Stevens hit sophomore Olabisi Johnson for a 52-yard touchdown with 14:35 to go in the half to put CSU up 7-0. The lead was short lived however, as Idaho would go on to score on five straight possessions.

Saunders second score of the game came off a 26-yard run in the second quarter to put the Vandals up 13-7. Idaho tacked on to their lead with 24 seconds to go in the half, as quarterback Matt Linehan found Jacob Sannon for an 8-yard touchdown putting the Vandals up 20-7 at half.

The bleeding continued in the second half, as Linehan scrambled for a 7-yard touchdown run to open the second half scoring and put Idaho up 27-7. After CSU saw its opening second half possession stall around the 50-yardline, the Vandals wasted no time extending the lead even further.

Linehan connected with Deon Watson for a 74-yard touchdown, the third longest passing play in Potato Bowl history, to put the Vandals up 34-7. It only got worse for CSU, as after finally forcing an Idaho punt after five straight possessions resulting in a touchdown, Robert Ruiz was unable to get a handle on the ball and Idaho recovered the muffed punt at CSU’s 14-yardline. The Vandals pursued to tack on another touchdown as Linehan hit Sannon for his third touchdown pass of the game, Sannon’s second, putting the lead at an insurmountable 41-7. Linehan finished the game 21-of-31 for 381 yards and five total touchdowns.

Colorado State would add a touchdown late the third quarter after Nick Stevens hit Michael Gallup for a 12-yard touchdown to cut the lead to 41-14, but the game was already decided. Stevens finished the game 21-of-36 for 445 yards, five touchdowns and two interceptions.

Colorado State added on touchdowns in garbage time highlighted by a 73-yard pass to Bisi Johnson, a 60 and 3-yard touchdown pass to Michael Gallup. Johnson finished the game with seven catches for 265 yards (most in Famous Potato Bowl history) and two touchdowns. Gallup finished with six catches for 108 yards and three touchdowns.