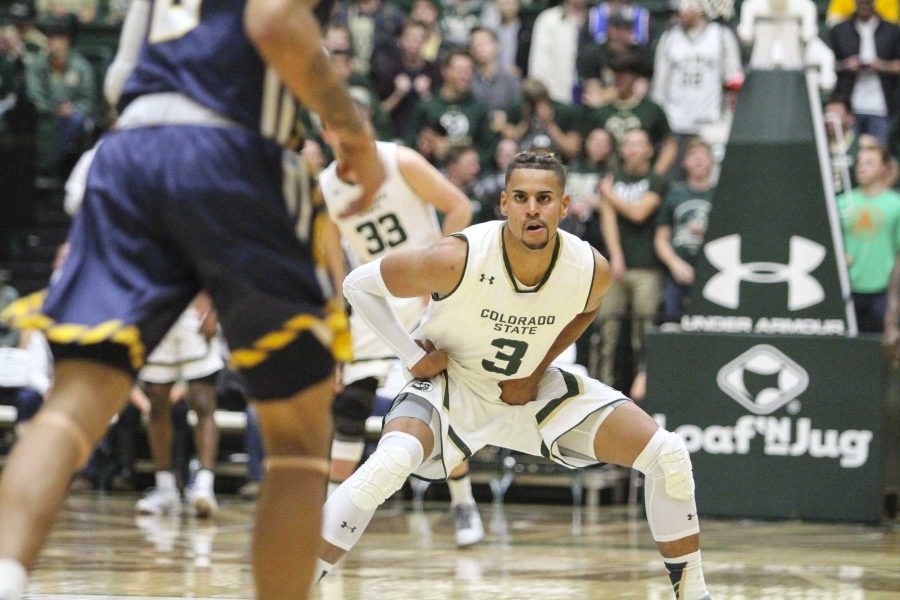 Gian Clavell (3) gets into a defensive stance in the 2nd half of the Rams win over UNC. Clavell returned to the court after a 9 game suspension from the team. Clavell came off the bench against Northern Colorado but finished the game with 15 points. (Javon Harris | Collegian)

After losing to cross-town rival Northern Colorado last season, in what Larry Eustachy refers to as his worst loss as Colorado State head coach, the Rams were able avenge themselves, defeating the Bears 81-64 at Moby Arena Saturday afternoon.

UNC did not make it easy on Eustachy’s Rams, taking just a one point deficit into the break and looking like they could be on the verge of a second consecutive upset, but the overall depth and size of CSU proved to be too much for the visiting Bears in the second half.

“I was kind of upset at halftime,” Eustachy said following the victory. “If you look up what they (UNC) did against Oklahoma in the first half. I think it was 41-40. Arizona was the same thing. What I loved was our players did not approach this game like it was a 15-point spread. They knew they would get an extremely well-coached Northern Colorado team and we would get their A-game.”

The Rams bench outscored the UNC bench 41-22, highlighted by a career night from Devocio Butler, who finished the day with 19 points in 30 minutes. “I was just playing in the flow of the game, take what I could get,” Butler said.

Also coming off the bench was senior guard Gian Clavell, who was playing in his first regulation game of the season after being suspended for the first nine games of the season for an on-campus incident that resulted in his arrest. “I thought it was great how our fans received him,” Eustachy said. “I just love the way there is no jealousy on this team, from what I can see.”

The Colorado State head coach explained how he loves that his team has been able to adjust both with and without their best jump shooter, finding ways to win tough games without him. In 28 minutes, Clavell totalled 15 points and finished the day 5-12 from the field, but perhaps where Clavell made the biggest difference was spreading the floor and creating scoring opportunities for his teammates.

“He (Clavell) brings another spark defensively and offensively, so it helped a lot,” Nico Carvacho told the media. “He averaged 20 points before he was out last year, so all the teams know what he can do,” Carvacho said, referring to what Clavell brings to the team.

As a whole it was one of the better offensive performances CSU has had this season, with Nico Carvacho (13), Gian Clavell (15), J.D. Paige (12) and Devocio Butler (19) all finishing the day in double-digit scoring.

A big reason the Rams were able to run away with this victory in the second half was their ability to control the glass on both ends of the court. CSU out-rebounded UNC 50-35 in total and 17-9 on the offensive glass, so the Rams were able to to both limit how many second chances their opponent got, while creating second-chance opportunities for themselves.

The Rams will look to carry the momentum of another in-state victory to the Pepsi Center next Saturday when they take on Kansas State.