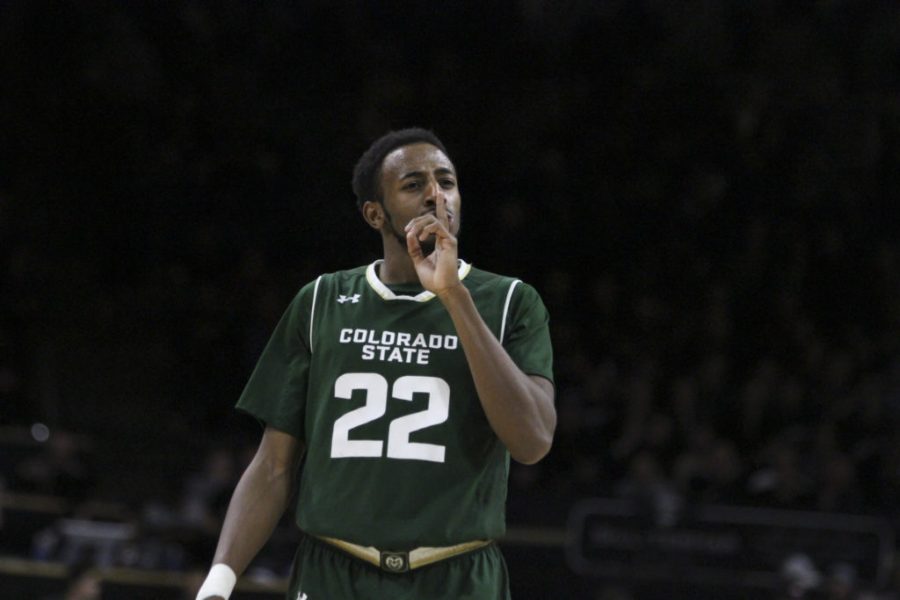 J.D Paige (22) shushes the crowd after a dagger three in the 2nd half of the Rams 72-58 win over rival CU in Boulder. (Javon Harris | Collegian)

Sorry Vegas, unless that was a typo, you got this one wrong.

The Colorado State Rams (5-1) were listed as 15-point underdogs entering their rivalry game against the Buffs in Boulder.

For a young team not used to playing in a hostile environment, of course there was pressure. The only thing is, the team in green and gold never seemed to feel it. The underdogs from Fort Collins came to Boulder and sent 11,000 Buff fans home in disbelief with a 72-58 upset victory.

“Coach said get our game on their court, and that’s exactly what we did,” senior forward Emmanuel Omogbo said. “I know you guys all thought we were going to lose. But guess what, we beat them by 14 and we’re on to the next one.”

Though the Rams never trailed in the second half, or even allowed CU to tie the game, they had a little trouble during the first 20 minutes.

Cold first half shooting has been a recurring problems for the Rams through seven games this season. It was more of the same tonight, as CSU struggled to find their offensive rhythm and trailed the Buffs 19-13 with 8:03 remaining in the half. However, from then on, things began to click.

“Every time everybody thought they were going to go by us, we knew that they weren’t,” head coach Larry Eustachy said. “We knew that we could stop them. Every time they came at us, we handled it”

Omogbo began to heat up and play his game. Nico Carvacho started to dominate in what would be a career game from him, finishing with 15 points and nine rebounds. All of a sudden, thanks to a 17-8 run to close out the half, the Rams led 30-27 at the break.

“The mood at halftime was good,” Eustachy said. “We weren’t too high up or too low. We went in there and said that we’re shooting the ball bad, but our emphasis is defense and getting to the line. If we can continue to do that we have a good chance of winning.”

Every time the Buffs threatened in the second half, CSU had an answer. Boulder fans began to head for the exit after J.D. Paige splashed home an ice-cold three to put the Rams ahead 60-51 with 3:12 remaining in the contest.

“That three was the dagger right there,” Omogbo said.

Defense, three-pointers, and free-throws were the difference.

There is no question that CU dominated the first 11 or so minutes of the game. But, due to the Rams holding their own on the defensive end, CU was never able to pull away and gain a lead larger than six.

Fifth-year senior Xavier Johnson, the Buffs leading scorer, was held to only six points on 1-7 shots from the field.

“This is the best young defensive team I’ve ever had,” Eustachy said. “We are built to not shoot it well and still win.”

The Rams won by 14, but it was close until the closing minutes of the second half. The difference in the game was hands down each team’s performance at the free-throw line. The Rams, who shot 76.5 percent from the stripe before tonight, converted 26 of their 33 (78.8 percent) free throw attempts against CU. They also were a perfect 9-9 in the first half and made their first 18 free throws in the contest. Colorado struggled from the line, going 17-for-31.

“I was as impressed as I’ve been since I can’t even remember,” Eustachy said. “To make those free throws was staggering, and to do it here.”

For the first time in seven games, the Rams were also extremely effective from beyond the arc. A team who normally shoots around 27 percent from three shot 40 percent Wednesday night. The Rams sunk six of their 15 three-pointers.

“We were just feeling it tonight,” Omogbo said. “We can shoot better than the scouting report says.”

Carvacho’s stellar performance, in which he notched a career high in rebounds (nine) and points (15) generously contributed to the victory.

“He (Carvacho) was big-time for us,” Omogbo said. “We told him earlier in the game that this is your show, no one can stop you. That’s exactly how we played and he went out there and played like a grown man.”

Besides Carvacho, the Rams had three other scorers hit double figures tonight. Omogbo led CSU scorers with 15 points while grabbing eight rebounds. Paige added 11 and Devocio Butler had a career high 13, converting four of his six attempts from the field.

The Rams brought home a bitter-sweet victory after their performance in the Rocky Mountain Showdown against CU. In doing so, CSU brought home back-to-back victories in Boulder for the first time since 1950 and 1951.

“We needed this win to show everybody that we aren’t just the little boys of Colorado,” Carvacho said. “It felt great, especially to get that win for him (Eustachy), I know he really wanted it.”