Rams can’t complete second half comeback in loss to Nebraska 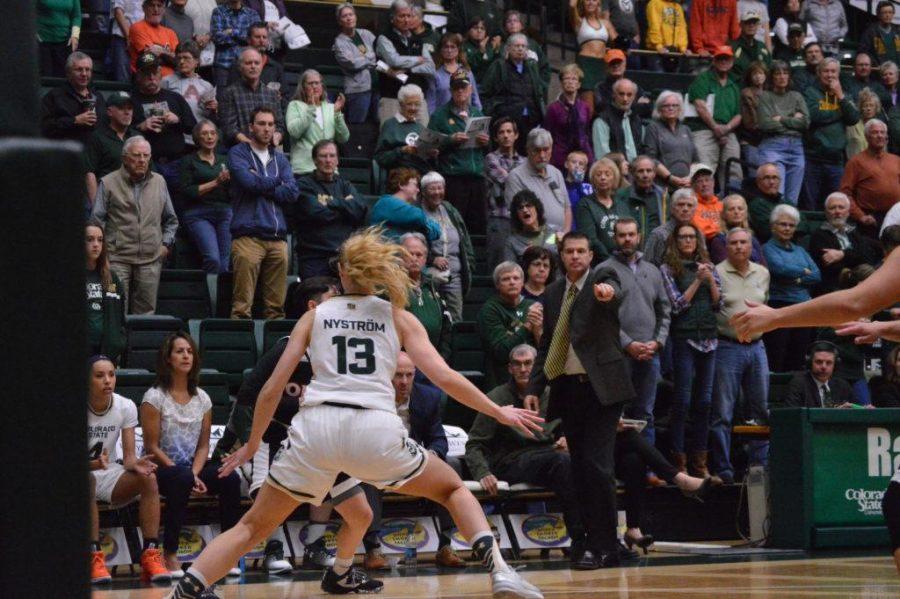 Despite leading Colorado State with 17 points, Hannah Tvrdy’s return to Lincoln was spoiled by a 62-59 defeat at the hands of Jessica Shepard and the Nebraska Cornhuskers.

The Nebraska transfer left nothing on the court against her former team, ending the night with 17 points on 6-9 shooting. She added nine rebounds and led the Rams in total minutes, with 38. Head coach Ryun Williams praised Tvrdy’s effort in the close loss.

“It’s something that we’ve seen a lot in practice,” Williams said. “Especially to do it here in Nebraska, this was a tough, tough game for her, because you want to do so well. There was a lot of pressure on Tvrdy tonight. I thought she handled it like a champion. I think it might be the coming-out party for Hannah Tvrdy. I really do.”

Even with Tvrdy’s strong effort, CSU had no answer for Nebraska’s Jessica Shepard. The preseason All-Big Ten sophomore forward led all players with 24 points and 13 rebounds. Her physical presence was felt early and often, earning her easy looks throughout the first half. She was contained for the majority of the second half, scoring just seven points, all coming in the final ten minutes. Her last-minute three-pointer was crucial, however, giving the Huskers a four point that they would not squander.

It was all about the second half for the Rams. After falling down 13 points halfway through the third quarter, CSU mounted its comeback. A 22-8 run for the Rams was capped off by a Stine Austgulen three-pointer at the end of the third quarter, giving them their first lead since the 5:06 mark of the first quarter. Defensive pressure shifted in the quarter as the Rams held Shepard scoreless.

“To start that second half, I thought we came out with just a much more aggressive mentality,” Williams said. “We drove the ball. We got to the rim and got to the foul line a little bit. We scored a lot from three feet, made a couple of threes and kind of got rolling.”

After being held scoreless in the third quarter, Shepard’s physical play returned in a big way to start the fourth, landing her trips to the line and, more importantly, piling up the fouls for the Rams. Three-point threat Amanda Kantzy was the first to foul out, joined moments later by Ellen Nystrom and Elin Gustavsson. Nystrom’s two early first quarter fouls forced her to the bench for the majority of the first half and limited her aggressiveness in the second.

Before fouling out, Gustavsson recorded her first double-double of the year with 13 points and 11 rebounds, including a layup early in the second quarter that put her over the 1,000-point threshold for her career.

Outside of Tvrdy, Gustavsson and Nystrom, who added 13 points herself, scoring was hard to come by for the rest of the Rams as they contributed just 16 more points. Although they struggled from deep from the get-go, CSU continued shooting the three ball, finishing a lousy 6-23 from behind the arc.

The Rams lost the turnover battle 14-10 thanks in large part to sloppy ball-handling down low and over-zealous drives to the basket that resulted in charging calls.

“We turned it over late,” Williams said. “We had a stretch where we came up empty on too many possessions in that fourth quarter. We just had some silly turnovers – in a tight basketball game on the road – that are eventually going to come back and haunt you.”

With the loss, the Rams remain winless against Big Ten opponents since defeating Indiana in 1997. CSU now turn their attention away from the Preseason WNIT and towards the rest of the regular season.

Having already matched their loss total from last season, the Rams will look to pick up momentum as they return to Fort Collins to host Adams State on Wednesday, Nov. 23.

Collegian sports reporter Colin Barnard can be reached by email at sports@collegian.com or on Twitter @ColinBrandard_