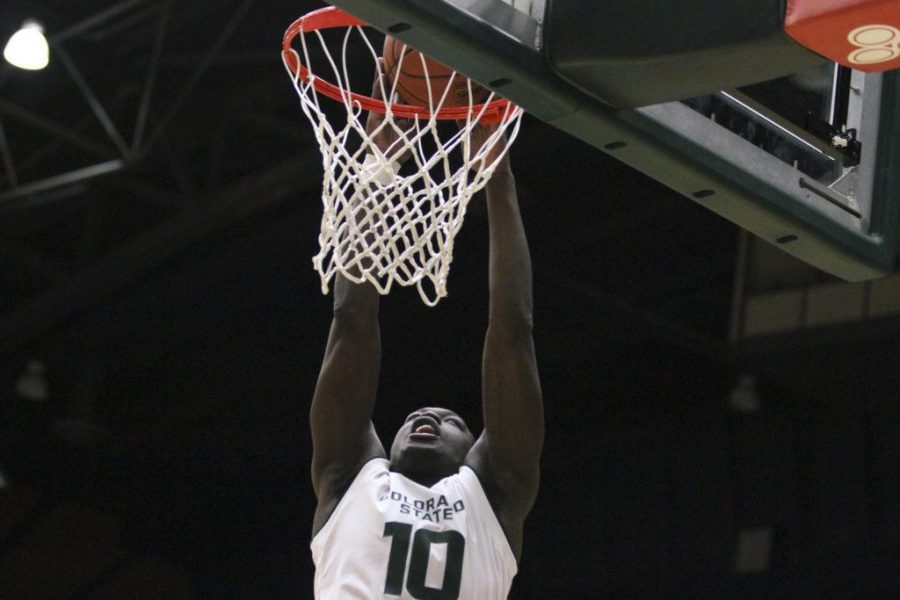 The big men from South Plains College took their turn to step up for the Rams.

Emmanuel Omogbo and Che Bob combined for 40 points and 22 rebounds in the Rams 84-75 victory over Division II Fort Lewis College. Omogbo, who transferred from South Plains before last season, individually scored 20 and grabbed 15 rebound for his first double-double of the season.

Bob, who was a member of the South Plains Texans last season, contributed 20 points as well and added seven rebounds.

“When I get out there I just want to give it all I got, play hard, go to the glass, play defense, just do the little things to get my team where we need to be,” Bob said. “If that’s energy, boarding, or getting a stop, anything, I just want to be productive.”

Though the two forwards dominated en route to the Rams second victory of the season, the team once again came out flat in the first half. CSU shot only 36.7 percent from the field in the first half against Fort Lewis. The three-point struggles continued as well. The Rams converted only one of their nine first half three-pointers, putting them at 1-23 on the season from beyond the arc.

“I feel like we are playing a little tentative out there, in the first half,” Omogbo said. “We just aren’t getting any stops. Coach told us coming in that this team (Fort Lewis) was really good, but we didn’t really listen and they gave us a fight. But I’m proud of my teammates for grinding it out.”

CSU grabbed their first lead of the game after Bob nailed a three with 31 seconds remaining in the first half. However, a layup by Fort Lewis with six seconds remaining sent the Rams into the locker room trailing 31-30 at half. The Skyhawks, who beat BYU last season, came to play. They displayed that from behind the arc, hitting nine three pointers in the contest.

“We knew when we played Fort Lewis that we could lose,” head coach Larry Eustachy said, “These guys had great guards, the way they shot it showed that. ”

The Rams finally found their stroke shooting the ball in the second half. They shot 46.7 percent from the field. Instead of staying away from the three-ball, like they did after struggling in the first half against NMSU, they continued to shoot from distance down the stretch.

This heavily contributed to the victory, as the Rams cashed in four of their 10 three-point attempts in the second half. Two of those made threes were hit by Prentiss Nixon, who heated up in the final 20 minutes to finish with12 points and four rebounds.

‘We are coming along, guys are going to start hitting shots,” Omogbo said. “It’s only the first two games of the season. Right now we are living at the free-throw line and need to grind out wins.”

CSU will hit the road and take on Pac-12 opponent Stanford on Sunday at 4:00 p.m MT.