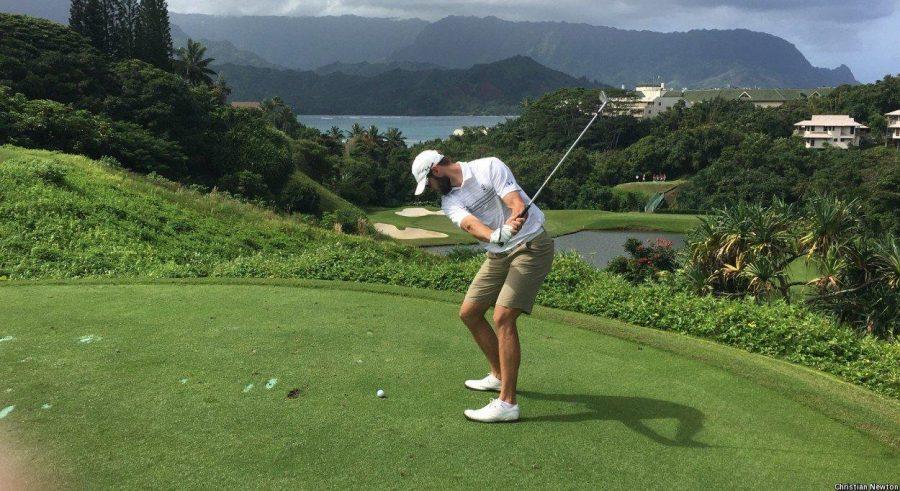 The Colorado State University men’s golf team escaped to Hawaii for their final fall event at the Warrior Princeville Makai Invitational in which they finished in 12th out of 19 schools at a 15-over 879.

The Rams came into the event ranked 46th in the nation by GolfWeek and were able to end the season in paradise at the Makai Golf Club at Princeville (Par 72 – 7,223 yards).

The tournament started out very strong for the Rams, as the tournament seemed to come in waves of good and bad play. They started out with six birdies and two eagles as a team and were right in the thick of the lead. But their play would cool down for the rest of the first round as they finished it at an 8-over 296 in a tie for 11th.

Junior Max Olefke had a memorable round when he carded a 3-under 69 and was in a tie for eighth. Senior Blake Cannon was not far behind after his 1-under 71 placed him in a tie for 16th.

“The capability is there but we just have to execute better under pressure,” said head coach Christian Newton in a statement. “I’m looking forward to seeing how we respond.”

Newton would not quite get the response he was looking for as Oelfke shot a 4-over 76 to drop to 1-over for the tournament and too far behind the leaders for a chase at the title on Tuesday. Cannon was consistent as he posted another 1-under 71 to move to 2-under for the tournament and within eight strokes of the lead in a tie for 18th. Sophomore Jake Staiano paced the Rams in the second round with a 2-under 70.

The team as a whole had another wacky day that saw highs in the form of 16 birdies and two more eagles, but could not get the fourth score they were looking for as they ended the round at a 1-over 289 to move them into 13th place at a 9-over 585, 42 strokes behind the leading Ole Miss Rebels.

“We had three nice rounds today,” Newton said. “We’ve been close both days to putting together a good team round but just can’t quite finish strong.”

The third round saw more of the same inconsistent play as Olefke at one point was 4-under for the round and was looking to make a move for a top ten finish. A rough second half of the round dropped him down to an even-par 72 for the round and into a tie for 26th at 1-over for the tournament. Cannon could not keep up his 71 streak as he carded a 4-over 76 to finish in a tie for 33rd at 2-over. Junior Colton Yates marked the third different Ram to have the low round in as many days after his 2-under 70 was the best for the day.

As a team, the Rams shot a 6-over 294 in the final round to finish 15-over and 48 strokes behind the Ole Miss Rebels who won the tournament by 22 strokes. Braden Thornberry from Ole Miss was the main contributor as he was the winning individual at 13-under.

The Rams finished the tournament with the most eagles (5), giving them some positives to take into the spring season.

CSU will hit the links next on Feb. 27-28 to open up the spring season at The National Invitational tournament in Tuscon, Arizona.

Collegian sports reporter Austin White can be reached by email at sports@collegian.com or on twitter @ajwrules44