Hughes Stadium: Saying goodbye to one era, hello to the next 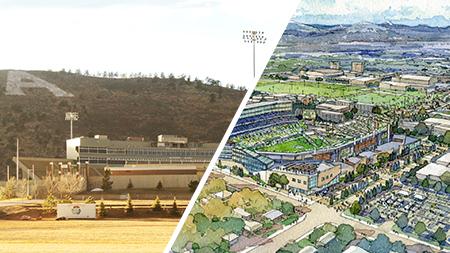 There have been 261 games played at Hughes Stadium. There will only be one more.

When Colorado State takes Sonny Lubick Field at Hughes Stadium Saturday night, each second that ticks off the clock, every tackle made, every point scored will all be making history.

Sitting in front of Horsetooth Reservoir, under the shadow of the ‘A’, Hughes Stadium has served 48 years as Fort Collins’ sanctuary for cheers, tears, beers and everything else that comes with college football.

Come Nov. 19, when Colorado State and New Mexico face off, this year’s team will try to send Hughes off with one final blast from the ROTC cannon, signifying victory.

Do it for Hughes

For CSU head coach Mike Bobo and his staff, Hughes Stadium doesn’t carry the same weight as it does for CSU coaching legend Sonny Lubick. They simply haven’t spent enough time in there for it to. That doesn’t mean it’s not special.

“The first game I coached as a head coach, was a nice memory,” Bobo said, referencing the 65-13 win over Savannah State in 2015. “Our guys played well and we won. It’s your first time on the sideline there at Hughes.”

While Bobo may have some fond memories from the 11 games he has coached at Hughes, he said he hasn’t — or really doesn’t — have the time to sit down and think about them.

“I had a lot of memories as a player in the stadiums, I’m thinking now as a coach at Georgia and here, it’s like three and a half hours of heartburn,” Bobo laughed. “I mean, you’re not sitting around in nostalgia looking at the crowd. You’re out there trying to figure out a way to get first downs, a way to get stops, a way to get a win. I think you look back on things when you’re done.”

Hughes Stadium will be done soon. Even if he has only been a part of two of the 48 seasons at Hughes, the coach wants to send it off the right way.

Game preparation hasn’t been different. CSU is preparing for New Mexico just like they would any other opponent. The one difference is that the team will be closing out an era.

For the players, the feeling is mutual.

For some, Hughes has been a part of their lives for up to five years. For others, it’s been just a few months. It doesn’t matter. No matter if they are a freshman or senior, Hughes is home away from home.

“I think we’re all going to miss Hughes,” quarterback Nick Stevens said. “When you look at the whole lifespan of Hughes, we haven’t been around for that long and have a lot of really good memories there. I think we’re going to miss Hughes. I don’t think it’s probably sunk in yet. It might when we get out there on Saturday. I think right now we are just going to focus on sending it off the right way with a win.”

When Colorado State takes the field Saturday night against New Mexico, priority number one is getting win number 146 at Hughes Stadium — CSU holds an all-time 145-114-2 record at Hughes.

On Oct. 22, 1994, the-No. 11 Colorado State and No. 15 Utah battled in front of the largest crowd ever at Hughes Stadium. Utah would go on to win the game 45-31, but the most impressive part was the atmosphere.

The head coach of the time for CSU was Sonny Lubick. Lubick coached at CSU from 1993-2007, 15 years. When 39,107 people packed the stands, that game sits atop all the other memories he withholds from Hughes.

“I can remember our (University) President Al Yates, Tom Jurich was the AD, and they brought in extra bleachers,” Lubick said. “Plus in the south end zone where the scoreboard is, as I remember looking at that, it was just completely filled with people and had temporary bleachers there…I think that would be one (memory) just because of the enormity of the crowd was something.”

A picture of the crowd hangs at Sonny Lubick Steakhouse. Lubick also has a photo of the game in his home.

“We had ABC come in and televise the game,” Lubick said. “It was a game for the ages. It was just the stadium completely packed and nobody ever thought we would see that…to see that type of a crowd, that type of excitement, and then to have it on ABC TV. I think it sold our stadium cause I watched the game afterwards, how they talked about Fort Collins and Colorado State University, took pictures, panoramic views of the entire area. To me that would be a special game.”

With the final game at Hughes looming, it is a bittersweet moment for Lubick. He spent 15 years as head coach, and three as an assistant, leaving behind a legacy that will never be surpassed. Colorado State is moving on from Hughes. Lubick has come to terms with it.

“It’s bittersweet,” Lubick said. “It’s a lot of good, fond, happy memories up at Hughes, however, the new on campus stadium is going to be a thing of beauty. Not only that, it shows a tremendous commitment from not only the University but the entire city. That just bodes well for, especially the athletic program, but also for the entire University that they are committing to doing something special.”

Lubick hopes the atmosphere he was blessed enough to be a part of back in 1994 during the Utah game returns at the new stadium. Lubick said it will take some time to get used to the idea of an on-campus stadium, but he believes it will result in a resurgence of support.

“I think sometimes one has to be of some fortune, you have to be good,” Lubick said. “I think what happened in (the Utah game) is both teams had winning records and we were ranked very high, so of course that’s what the media is looking for was the big game. I know the coaching the staff is doing a great job right now, but if they could get to a point where they end up being 6-1 at one point and the huge TV people come here, and you’re playing a pretty good opponent, that could happen often, because of the fact that the new stadium will sell itself.

“And the fact that it’s on-campus, what a great atmosphere. It doesn’t get any better. The leaves are all turning, the color of our campus, and then all the sudden you see a brand new stadium and 40 thousand people in there, I think that’s a very real possibility.”

Hughes has served its purpose. It is time to say goodbye.

“It’s starting to hit me more and more,” Lubick said. “I’ve always enjoyed my time spent out at Hughes. I enjoyed everything about that…I just think about it overall, and I was looking here (pointing to a binder on his desk), going through our ’93 to 2007, and I see the coaches, I see pictures of our coaches, players. They come back to me. Somebody asked me before; I always enjoyed going to the stadium and to have our ritual and then coming out just before the game. I always enjoyed that. I kind of had a nice relationship with the marching band. And when I’d come off the filed and go up the tunnel 10 minutes before game time, the band would be in that tunnel warming up and playing, and I’d be high-fiving them and they were all excited. Little quirky things mean a lot.

“Our little ritual in the locker room was always the same every game, but I guess those are the things you miss the most. I guess the (Utah game) would be one of them that all of the moments that were great in CSU history to see the crowd, and see what could be and what will be here because our community continues to grow. The new stadium is going to be something special.”