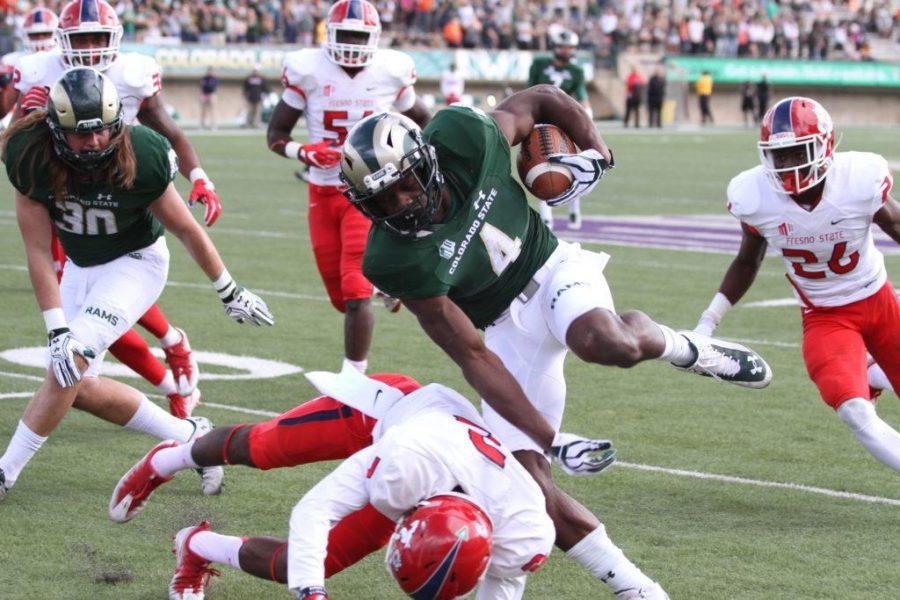 On Saturday, the Colorado State Rams finally put together the complete game of football they had been searching for all season in their 37-0 shutout victory over the Fresno State Bulldogs.

“It was nice, It was what coach has been looking for,” Quarterback Nick Stevens said after the win. “It was a good complete effort. Hats off to the defense for the shutout and good job by everybody on the offense to put up 37 points.”

“Michael is getting more confidence every week; of ‘I’m going to try and dominate every snap’,” coach Mike Bobo said after the game.

By now, it is getting to the point where Gallup is actually dominating a defense on almost every snap.

On Saturday, Gallup kept up his hot streak, finishing the day as the Ram’s leading receiver once again, by catching 9 balls for 129 yards. Gallup scored on a 18-yard screen pass from quarterback Nick Stevens, where he was able to tightrope the sideline and hurdle a Fresno defender on the ground en route to the end zone.

“He’s just a nonchalant dude,” running back Izzy Matthews said of Gallup. “What did he have tonight 130-yards something like that? That’s expected. If he has a 130-yard game that’s known. He doesn’t have to say anything, he doesn’t have to yell on the sideline. Everyone in the crowd knows what Mike G did today.”

After his 18-23 for 237 yards and one touchdown performance on Saturday, Stevens is 39-51 passing for 474 yards and three touchdowns in his last eight quarters of football.

Those numbers are the mark of efficiency, and Stevens has been able to be just that in his last two starts.

“He was phenomenal,” Matthews said of Stevens. “He’s not that guy who is going to throw for 500 yards, (but) you know what you are going to get from Nick every single week and that’s just excellence. You really just can’t ask for more from him.”

Steven’s one mistake came when he forced a ball to Gallup in the second quarter that was picked off by Bulldog safety Stratton Brown. The play was nullified by a holding penalty on Gallup, and Stevens walked away without the pick. Other than that, Stevens consistently put the ball exactly where it needed to be on Saturday.

“I’m not sure, I think it was definitely efficient for me, this game,” Stevens said on whether or not this game was the best he has played in his time at CSU. “I’m happy again to have no turnovers– luckily with that holding call. I made a couple of mistakes, but for the most part it was pretty good.”

The talk around the CSU offense heading into the game was the balance the Rams had at running back between Izzy Matthews, Dalyn Dawkins and Marvin Kinsey Jr. Now, add junior wide receiver Dietrich Clark to that rushing mix.

Clark who has been active in the Rams rushing attack up to this point flashed his dynamic potential on Saturday. Clark took jet sweeps, tosses out of the backfield and direct snaps at quarterback, and finished the game with 26 yards on six carries.

Kinsey continued to state his own case for an increase in carries, as the true freshman finished as the team’s leading rusher on the day with 83 yards on 10 carries to go with a touchdown.

And even freshman wide receiver Anthony Hawkins joined in on the young gun fun, catching his first touchdown as a CSU Ram on a 14-yard fade strike from Stevens in the third quarter.

“You look at the guys, the Marvin Kinsey’s, the Michael Gallup’s, the Detrich Clark’s, the guys that were some newcomers, they are starting to understand what we are trying to do offensively,” coach Mike Bobo said. “They have improved, and you can see when they have the ball in their hands, something might happen every play.”

Arjay Jean picking up the pressure

Mark down Arjay Jean as another true freshman Ram who played an impact role in Saturday’s game.

Jean, who was frequently active in the Bulldog backfield, was credited for 1.5 sacks on Saturday, and it just as easily could have been more, as Fresno quarterback Zach Kline was just barely able to throw the ball away while in Jean’s grasp in the third quarter.

Jean, who starts in the Rams’ “Cheetah” package as a third down rushing specialist might start to find himself more involved in the CSU defense as the season closes out.

“He does a great job,” Bobo said of Jean. “He’s what we are looking for. He is long, he has speed, he’s going to be a very good player for us one day. These reps that he is getting are not only going to help him this year, but will continue to help him in the future.”

With the win, the Rams have now won six games in a row in the month of November and since the 2012 season, the team has closed exceptionally well, posting an 8-1 record in the month.

The team has also won three out of it’s last four games, and now sits just won one away from becoming bowl eligible for the fourth straight season.