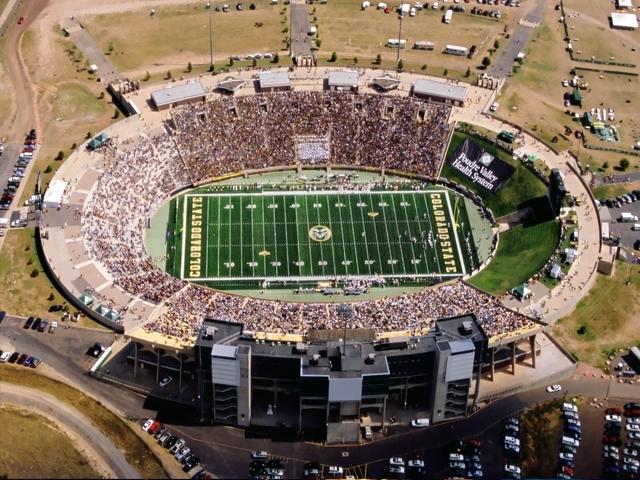 Plenty of people have made the journey to Hughes Stadium for years to support Colorado State football, but few are able to say that their journey spanned the entire space and time of the 48-year-old stadium.

When David Munday finds his seats 12 rows up near the North end zone at Hughes Stadium on Saturday, he will be one of them.

Those miles can carry a lot of memories. They sure do for Munday.

For over twenty years, Munday has made the trip from the Northeastern Plains to the Northern foothills almost every home Saturday to watch the Rams play.

The only games he missed were because he was unable to get a ride, or the unforgiving weather in that part of the state made the trip too hazardous.

But Munday’s journey to Hughes did not start at 120 miles, rather, it started at roughly three.

He was a junior at Colorado State in 1968 when the Rams made the transition from old Colorado Field to the shiny new stadium along the city’s outskirts.

“We thought the thing was huge and it was really pretty the first time,” Munday said of his first memories of Hughes. “After the wooden stake bleachers for the student section in the old ball field, it seemed really great.”

In that first year in Hughes Stadium, the Rams went 2-8 under coach Milo Lude.

The Rams might have been getting blown out, but that did not deter Munday from attending home games. Like a lot of students nowadays, making the trip to Hughes was about more than just football.

“Some of the times were pretty wild,” Munday said.

But life moves on, and Munday moved on too. He moved away from Fort Collins and started working. It would be awhile before he came back to Hughes.

Munday is a man who likes to play cards, and for 20 years or so, those cards gave him some money. He had decisions to make about what to do with it.

One of those decisions was returning to where it all started.

He can’t tell you exactly what year he first bought those season tickets, but since then, he’s been a mainstay in the stands, making that Saturday drive as much as he can.

“Well it was something to do,” Munday said about what kept him coming back. “It was interesting. It is kind of the highlight of my week.”

For those 20 odd years he has lived CSU football, and he has his fair share of memories and opinions to go along with it.

Some of his best memories surround the team’s new coach in the mid 1990s Sonny Lubick, and his underdog group of players who played the game the right way.

And for Munday, the team’s success under Lubick marked a contrast to his first experiences in Hughes.

“It was kind of fun watching a down program come up.” Munday said. “It was very different.”

He was there driving down Shields street in 1994 to see students “hollerin” in the streets while carrying away an intact goalpost after the Rams knocked off Wyoming 35-24 in a come from behind win. That’s one of those images still burned in his mind.

He was there for the Steve Fairchild era, which he calls the team’s biggest disappointment. He loved the way former coach Jim McElwain called plays. He has not seen enough of current coach Mike Bobo to form a definite opinion, but he likes the way the program is headed.

Injured freshman quarterback Collin Hill has the arm talent, but he loves the way the offense operates under junior quarterback Nick Stevens.

He has his opinions, and even now, he can talk football with the best of them.

The average person has 120 to 220 degrees of peripheral vision. Munday was declared legally blind when he hit 15 degrees.

Nowadays, he lives with one percent central vision.

This year, he was finally discouraged from carrying a gun when he goes out hunting in pheasant country Colorado, but he is quick to add that he got some birds even after he was declared legally blind.

As far as game day, he was never discouraged from attending games. He might struggle to see the South-end of the field, but he can still follow the ball around.

“As far as I know it’s the same as for anybody else because I don’t see what I don’t see,” Munday said about his game day experience. “I probably do not (see everything) but I can see a good portion of it.”

And as far as what’s changed from his first trip to Hughes 48 years up until now? Not much.

“Well to tell you the truth, it’s getting very hard to go up and down those stairs,” Munday said. “But other than that, the game seems the same, the Stadium’s the same, the people are pretty much the same. The results aren’t much different. Some excitement, some disgust.”

Even with his impaired vision, he is still having as much fun as he had before. After all, that’s what it’s all about on Saturday.

“It’s a good time to get together,” Munday said. “My family and I don’t see each other very often. (It’s ) just a chance to get together and raise a little hell. There is no use going if you can’t raise some hell. When it quits being fun, I’ll quit going.”

Someone he gets to raise some hell with is his niece Kari Redmond, who started going to games with her uncle five years ago when she returned to the states after educating abroad.

For Redmond, her season tickets next to her uncle gave her a chance to spend time with a dear family member she does not see very often, and to carry on a tradition that means a lot to her and her family.

But now, Hughes stadium is coming to an end. A lot more than just CSU football in the confines of the stadium is ending with it.

Over the years Munday and Redmond have developed the camaraderie with the fans around them that can only be shared with fellow Rams on game day.

In fact, the first time it ever dawned on Munday that he had been to the first game at Hughes, he mentioned it to the man sitting next to him. The man quickly replied that he had too…and he’d been to every game since.

The man sitting next to them made it to the first, but he did not make it too the last.

But the man’s daughters still hold his season tickets. A part of him will live on in Hughes’ final game.

Those are the real stories in the 48 years of the stadium.

For Redmond and Munday, it’s the people around them that make Hughes what it is. That’s the part that is going to be hard to let go.

Going from first to last is something Munday will be able to say, but he doesn’t look too much into that.

“Right now, it seems kind of nostalgic,” Munday said. “At the time, I didn’t think anything about it. It never dawned on me that they were going to close this stadium early. I have had a lot of good times there, a lot of excitement.”

And of the future, and CSU’s new on-campus stadium, they don’t know whether the tradition will continue.

Munday said it’s getting harder and harder to go to games, and with his eyesight, Redmond said that it just might be too much of a change leaving the comfort of Hughes Stadium for a new home.

But there’s still one more chance.

Yes, on Saturday Munday will say goodbye to the stadium, but that’s not what is important. There’s a football game to be played after all.

“I just hope they win,” Munday said. “There is nothing special I can get out of it except having a good time watching. I like close games. If you go home and you are not hoarse, it was not a good game.”

Forty-eight years will not come to an end in just over three hours. There are too many memories and too much to cherish about Hughes stadium to ever let go.

But one for one more night, everything will be just like it is supposed to be.

One more time to settle into those concrete seats at Hughes stadium with his family while the lights go on, and the Rams take the field.

Collegian sports reporter Eric Wolf can be reached at sports@collegian.com and on twitter @Eric_Wolf5